Electrical output would more than double 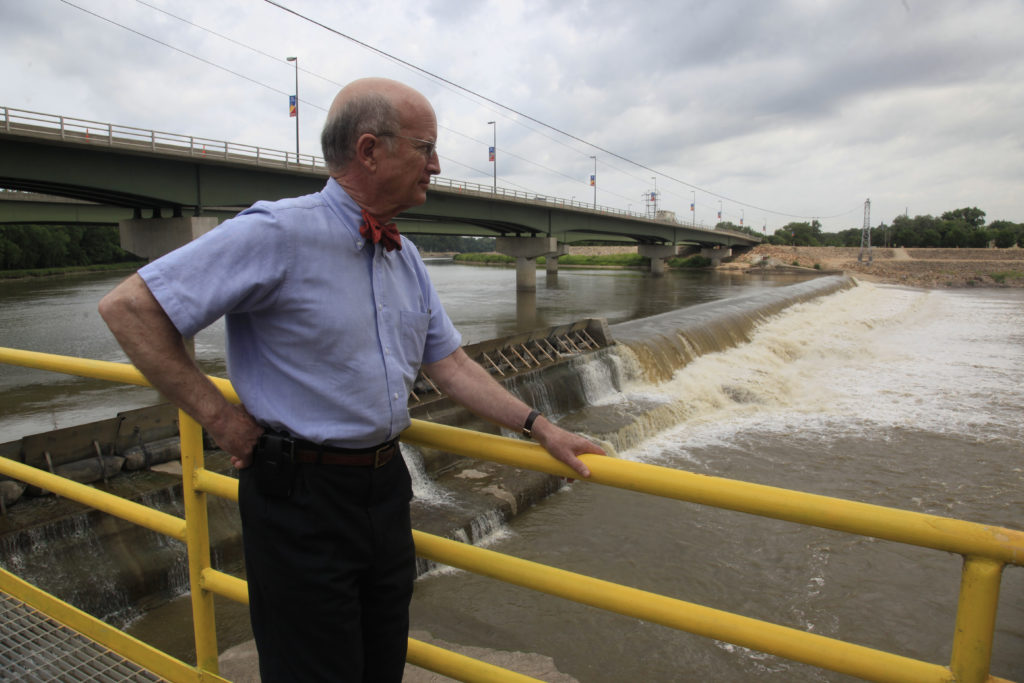 Steven Hill, looks out on the Bowersock Dam that spans the Kansas River, the dam has provided power for Westar and other utilities for years and now is selling green tags to locals and soon Hill hopes to be selling the idea of a new 2 Million dollar hydroelectric plant on the north side.

Leaders with the Bowersock Mills and Power Company have filed for a federal permit to build a new $13 million hydro-electric power plant on the north bank of the Kansas River.

The company will hold a public meeting next month as part of its efforts to win a key permit from the Federal Energy Regulatory Commission.

“There’s no question that we’re further along than we’ve ever been on this project,” said Bowersock President Stephen Hill, who has been publicly discussing the possibility of expanding Bowersock’s operations since 2007. “We’re optimistic. We think it is probably a go. We should know in the next three to six months.”

Bowersock has hired a firm to design a new four-story building that would sit at the north end of the dam between the river and the levee. Hill plans to unveil the design at next month’s meeting, which is scheduled for 5:30 p.m. on Aug. 13 at the Union Pacific Depot in North Lawrence.

The building will house three large turbines that will more than double the amount of electricity the company can produce out of its existing plant, which is just behind City Hall on the south bank of the Kansas River.

The company will continue to operate the south bank plant, which was built in the late 1800s and was used by Hill’s great-grandfather to fuel an industrial boom in Lawrence. With both plants, the company will be able to produce nearly 7 megawatts of power per day.

Or another way to look at it is that the new plant, combined with the old one, would allow the company to generate enough electricity to power about 6,000 homes, up from about 2,000 homes that the company can provide for currently.

Hill credits a pair of political victories as key reasons why the plant project has momentum. When Gov. Mark Parkinson signed off on a bill allowing for a new 895-megawatt coal burning power plant in western Kansas, he also insisted on a new energy bill that requires investor-owned utilities in the state to generate at least 20 percent of their energy from renewable sources by 2020.

That legislation should produce a new list of potential buyers of Bowersock energy, as utility companies ranging from Westar to small rural cooperatives look for renewable energy sources.

“We always dreamed and hoped that someday this would be possible because there is a lot of unused water that comes down the river,” Hill said. “But until recently, it never looked feasible.”

City commissioners delivered the other major development last week. Commissioners unanimously agreed to extend the city’s maintenance agreement on the dam until 2077. Bowersock continues to own the dam, but the city has historically maintained it. The city has done the maintenance, in large part, because the dam is critical in keeping the water levels in the river high enough for the city’s Kaw Water Treatment Plant to operate properly.

Commissioners earlier this month also tentatively agreed to move ahead on an approximately $2 million project to make major repairs to the dam, which was built in the 1870s.

City Commissioner Aron Cromwell said he thinks a new hydroelectric plant could help Lawrence reduce its carbon footprint, and also help the city receive national attention as a green community that is friendly to green businesses.

Hill said the plant will be designed to accommodate group tours. And with a design that will have it stand slightly taller than the Kansas River levee, it will be visible to thousands of cars per day that go over the Kansas River bridges.

“It will be a showcase project, we hope,” said Hill, who said the design may include an area for recreational canoeists to access the river.

In addition to a permit from the Federal Energy Regulatory Commission, the project will need permits from the Corps of Engineers, the Kansas Department of Health and Environment and several other agencies, Hill said.

“That is the $64,000 question: Whether we can get financing without the stimulus,” Hill said. “There is stimulus money available. We qualify for it, but many people are standing in line.”