Couple speak out on transgender issues 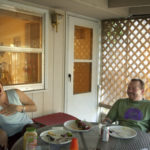 Lawrence couple Jessica and Jay Pryor have a laugh after dinner Tuesday on the back porch of their Lawrence home. Jay, who is a female-to-male transsexual, left Kansas 10 years ago as a woman who had fought for sexual orientation to be added to the city’s anti-discrimination policy. Now Jay is back in Lawrence speaking out as a transsexual fighting for gender identity status to be added to the city’s policy.

l The Kansas Equality Coalition asked the Lawrence City Commission in May to add gender identity status to the anti-discrimination policy.

l Including gender identity in the policy would provide protections against discrimination for those who identify with a gender other than the one they were born with. The current policy includes sexual orientation, along with the federally protected categories such as age and race.

l The City Commission asked the city’s Human Relations Committee to study the proposal and make recommendations about possible changes.

l The Human Relations Committee will speak publicly about the proposal at its Aug. 19 meeting. No timeline was given for when the committee will make their recommendations to the City Commission, which would need to vote on any changes.

A lot has changed for Jay Pryor between the time he moved from Lawrence in 1999 until moving back in 2007.

For starters, in 1999 Jay Pryor was a woman named Janet Pryor finishing up her bachelor’s degree in communications studies at Kansas University.

In his eight years away from Lawrence, Jay was living in Washington, D.C., making the transition from a woman to a man. It’s a process that included spending a year living and presenting himself as a man, beginning hormone treatments, and eventually leading to body-altering surgery.

And while his gender has changed, what has remained constant has been his desire to speak out and educate those in the community about issues involving sexual orientation and gender identity.

When Pryor was a student at KU, he was a lesbian featured in the documentary “Shades of Gray,” which chronicled the successful fight in Lawrence to add sexual orientation to the city’s anti-discrimination policy.

Pryor is now advocating for the city to add gender identity status to its anti-discrimination policy. Adding such a category to the city’s policy would provide protections against discrimination based on gender identity in the same ways that other categories such as race and age are protected.

Pryor said that he was initially apprehensive about speaking out publicly regarding his transgender status.

“I’m scared,” said Pryor, whose concerns range from discrimination to the possibility of violence against him by those who don’t understand him.

It’s a situation that he said can be very uncomfortable for people who first hear about his transition from a woman to a man.

“People get confused sometimes,” said Pryor, who works as a business consultant and part-time as a life coach. “I try to give people space for the weird aspect of it.”

Acceptance from his friends and family has taken time, said Jessica Pryor, Jay’s wife. The couple married in Virginia in 2003, though the marriage is not recognized in Kansas because Jay is still legally considered a woman in the state.

“It’s outside of what most of us have thought about,” said Jessica, who met Jay while he was transitioning to a man.

But with time, the Pryors said most of the people in their life have come to accept the changes Jay has made.

“For any family member, it’s a process you go through,” said Kathy, who worried she was losing a sister. “But I actually have a brother and a sister (now).”

From her experiences with Jay, Kathy has herself become an advocate for transgender rights. Kathy advocates for changes to the city’s anti-discrimination policy as a board member of both the Kansas Equality Coalition and the Lawrence Chamber of Commerce.

In addition to believing such a change would promote equality in Lawrence, Kathy said that signifying to the state that Lawrence is a safe place for transgender persons makes financial sense as well.

“It’s an economic development issue,” said Kathy, explaining that the city’s businesses will benefit if transgender persons know Lawrence is a safe place for them to do business.

Despite the risks, Jay said he will continue speaking out about equal rights for transgender persons. And in addition to possible changes to the city’s policy, he said his goal is to make the community a safer place for the younger generation of residents struggling with their gender identity.

“Creating Lawrence as a safe place for all people is just the right thing to do,” he said. “We’re talking about the safety of people.”