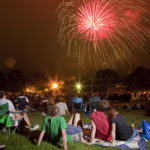 People sit in Constant Park downtown to watch the 2009 annual fireworks display put on by the Lawrence Jaycees.

Many in the crowd at Watson Park on Saturday night were happy to see the Fourth of July celebration move back to Lawrence’s downtown. However, some of those who had camped out on the grassy field were dismayed that trees got in the way of the fireworks display.

“If the (fireworks) were up higher it would have been better … or if they lowered the trees,” Tony Sailors joked. “Other than that it was a great evening.”

While the high flying fireworks were in clear sight of the thousands who huddled on blankets and lawn chairs in Watson Park, the ground fireworks were lost behind a grove of trees in the park’s north end.

“I think they look pretty cool, I just wish I wasn’t behind a tree,” 13-year-old Sam Dowell said.

In 2008, the fireworks display was at Sesquicentennial Point at Clinton Lake and in prior years at Burcham Park along the Kansas River.

This was the first year the Lawrence Jaycees aimed fireworks for those sitting in Watson Park, where a large crowd had gathered for the Lawrence Originals Independence Day celebration. The event featured live music and food and drink from 18 locally owned restaurants.

With around 4,000 people in Watson Park by 8 p.m., organizer Constance Wolfe said the Lawrence Originals event was exceeding expectations.

The smell of barbecue filled the air as the sound of bluegrass music drifted through the crowd. Families spread out on blankets and a group of young men played Frisbee in the center of the park.

“I don’t think people quite knew what to expect, so they are pleased with what they see,” Wolfe said.

Dressed in a blue pants, a red shirt and a red, white and blue necklace, 82-year-old Marion Willay was enjoying a chicken wrap sandwich from Zig & Mac’s.

“I like it back down by the river. It’s prettier down here,” Willay said.

Eight-year-old Liam Hoey-Kummerow and his family spent the day downtown, going to the Tour of Lawrence bike races, the pool and then the festival at Watson Park.

Don Phipps, who lives near Vinland and was wearing an American flag T-shirt with a peace sign, ranked it as one of the best Fourth of July celebrations he has attended.

And despite the cluster of trees that blocked the view of the fireworks, Bryan Hendrix said he would definitely come back next year. He would just find another spot for the big fireworks finale.