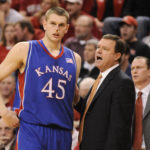 KU center Cole Aldrich, who has his nose stuffed to stop a bit of bleeding, talks with Kansas head coach Bill Self during the second half Wednesday, Jan. 28, 2009 at the Devaney Center in Lincoln.

Kansas’ Cole Aldrich took a shot to his nose and had his left nostril plugged with cotton after the game.

“I don’t know what it is. I’ll get it checked out tomorrow. It’s not anything that’s bothering me too much,” he said of his swollen nose. He refused to speculate on whether it was broken.

He said the game was “real rough. They really kind of packed down a little big, came from every angle. They were swiping quite a bit, and they made it uncomfortable for us, myself included. They were a tough team. They came out gunning for us right away.”

Aldrich didn’t score or grab a rebound the first half. He had eight points and eight boards the second half.

“It’s tough. It’s real tough for me,” Aldrich said, asked if it’s difficult to play against a small team like NU. “It’s tough getting out to shooters and playing the dribble drive.”

Sherron Collins went 4-for-4 from the free-throw line and now has made 27 in a row. That ties Wayne Simien for second best streak in KU history. Simien also has the record of 34.

“No,” Collins said if he’s thinking of the record. “What is the record?” he added, nobody in the vicinity of Collins able to recall the number and satisfy his curiosity.

KU signee Elijah Johnson, whose left knee has been bothering him, was cleared to play the rest of the season by his doctor Wednesday, the Las Vegas Sun reported.

The 6-2 guard from Las Vegas Cheyenne High missed a handful of games because of a slight ligament tear in his left knee earlier this season. He was limited to just three minutes in the second half of a game Tuesday night.

Saturday’s KU-Colorado game will be shown exclusively on ESPNU. Sunflower Broadband customers will need to subscribe to either Silver TV or the Sports Pack in order to receive the game as ESPNU is on channel 141. Tipoff for the game is 3 p.m. in Allen Fieldhouse.

KU has won 12 in a row versus Nebraska and five straight in Devaney Center. …KU trailed at halftime for the third time this year (UMass, 36-30, and Michigan State, 37-18). It is the first time the Jayhawks won when behind at the break. … KU shot over 50 percent for the fifth straight game. … KU’s bench outscored NU’s, 21-6. … KU had a season-high 21 turnovers. … Mario Little had a career-best seven rebounds while playing 30 minutes, also a personal high. He tied his career mark dishing out two assists.

Wall, 6-foot-4 from Word of God Christian Academy in Raleigh, N.C., said he currently is “leaning toward Kansas and Memphis, not specifically in that order.”

He also has Baylor, North Carolina State, Oregon and Kentucky on his list.

“Those are the two coaches who I’ve had the best connection with so far because they’ve been in for in-home visits,” Wall said of Bill Self and John Calipari.

Wall told ESPN.com that Self told Wall he’d “have to work for everything.” Calipari compared Wall to NBA No. 1 draft pick Derrick Rose to indicate he’d have the ball in his hands a lot, which Wall said was “attractive.”

Wall told ESPN “probably” when asked if he was a likely one-year-and-done college player.