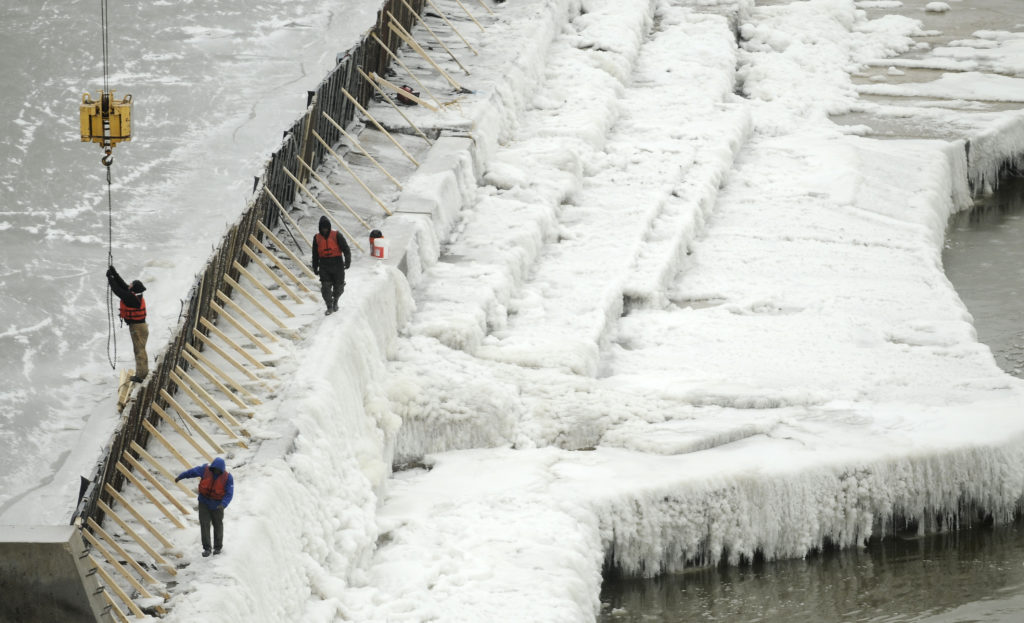 Bowersock Mill and Power Company workers, clockwise from left, Rich Foreman, plant manager, Ed Dumas and Shannon Porter, make their way along the icy conditions of the Kansas River Tuesday, Jan. 27. Because of low water levels and no water moving over the top of the dam, the crew has been able to install new boards along the top of the dam. 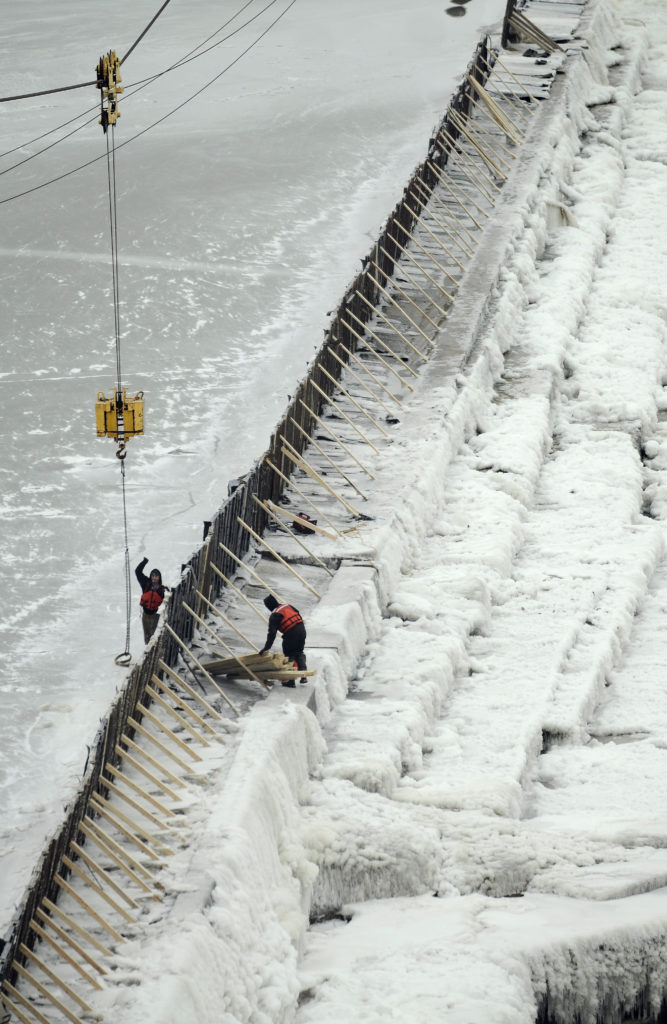 Bowersock Mill and Power Company workers rebuild a network of boards and doors Tuesday that hold back the Kansas River to enable the dam to generate more power.

How’s this for a job description:

• Strap ice screws onto your boots.

• Venture onto a dam built during the Ulysses S. Grant administration.

• Install new planks of water-blocking plywood, at times stepping on a river silent on the surface only because it’s frozen.

Oh, yeah: Manage to do it all with a smile, even as your teeth freeze in 10-degree weather.

“It’s been an adventure, but we’re just so grateful to get this opportunity to get the doors back up,” said Sarah Hill-Nelson, owner and operator of Bowersock Mills & Power Co., whose hydroelectric plant at the southern end of the Bowersock Dam borders the northern edge of downtown Lawrence. “When you get a window like this to raise the doors, it doesn’t matter if it’s Saturday, Sunday or Christmas. You get out there and do it.”

Since Jan. 17, Bowersock crews have been overhauling the dam’s network of wooden boards, metal doors and support systems — components that work together to raise the water level up to 4 feet in the area immediately upriver from the dam.

The system improves rowing conditions for Kansas University’s crew team, helps ensure flow for the city’s Kaw Water Treatment Plant, and boosts the force of water rushing past Bowersock’s seven hydroelectric turbines. In turn, the power plant can approach its peak efficiency of 2.3 megawatts, enough electricity to serve 1,500 to 1,800 homes.

The dam’s doors had been down since April 2007, until the U.S. Army Corps of Engineers helped lower the river level to enable the latest work. Crews soon scurried to replace 17 broken boards. Inspectors checked the dam’s condition.

The frigid work of welding new hinges and supports for the entire line is scheduled for completion today.

“It does get cold,” Hill-Nelson said, after working atop the dam. “But it’s like my dad’s always said: ‘God and the corps deal the cards, and we just play the hand.’ “