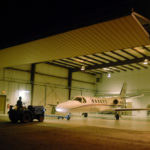 A Kansas University aircraft rests in its hangar at Lawrence Municipal Airport.

In a tight budget year, Kansas University officials have said there’s little university business that’s not being considered for cuts.

And that goes for KU’s private air flights, as well.

KU owns one Citation Bravo jet and has a 50 percent ownership in a 1999 King Air C90B turbo prop through Executive AirShares. Both were purchased with private funds.

With cuts looming, individual departments that use the planes will likely be cutting back on their usage this year, KU spokeswoman Lynn Bretz said.

“If departments want to use the aircraft, they pay for it,” Bretz said. “They try to maximize the use of the plane.”

They could turn to commercial flights, or driving and staying overnight in hotels if either option works out to be more efficient, she said.

Gary Doolittle, a KUMC professor of hematology/oncology, coordinates the medical outreach programs, and said his use of the plane saves time and money over flying commercially to small areas of western Kansas.

He said he approaches the use of the plane from a doctor’s perspective — he is able to arrange his busy schedule to allow for time to treat thousands of cancer patients in cities like Hays and Goddard.

Other users for the planes included KU Athletics, which uses the planes for recruiting trips and other purposes. The provost and chancellor use the plane to speak across the state at events for high school seniors in the Kansas Honors Program.

KU Endowment Association uses the plane for fundraising visits across the nation, and the Alumni Association and admissions offices also use it to fly to events.

The Citation Bravo seats eight passengers, and the turbo prop seats six. Organizers of the medical missions and other trips say they often try to maximize the number of people on the plane.

KU says it spends nearly $700,000 per year to keep its aircraft going. This includes salary and benefits for three pilots and a scheduler, jet maintenance, the fixed cost of the fractional ownership, pilot training and insurance.

Most of that is taken from state funds, Bretz said, except maintenance costs, most of which come from a per-flight-hour charge to its users.

She said the university sees value in the return from the aircraft in dollars coming from donors and federal funds and students recruited to the university.

Bretz also said flying the planes contributes to the Kansas economy — a fact reiterated on the national stage this month.

According to an article in The Washington Post, members of the Kansas congressional delegation, including U.S. Reps. Dennis Moore and Todd Tiahrt, succeeded in removing a provision limiting the use of private jets from a $700 billion bank bailout bill because of the presence of the airline industry in the state.

As available dollars shrink, the trips may be another item the university will have to do without.

“I would have to assume it’s under scrutiny,” Doolittle said. “I would be naïve to think it would not be scrutinized.”