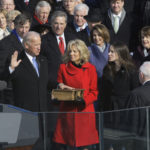 Vice President-elect Joe Biden, with his wife Jill at his side, takes the oath of office from Justice John Paul Stevens, as his wife holds the Bible at the U.S. Capitol in Washington, Tuesday.

The 66-year-old Delaware man, often long on words and never short of opinions, became the nation’s second-in-command on a day of profound change. He is now a heartbeat from the presidency, an influential counselor to President Obama, and one of the government’s main ambassadors to other global powers.

Joe Biden’s swearing-in moment was, fittingly, second billing to Obama’s. But the significance was not lost, and will soon be felt; Biden’s ascendancy ends the contentious and consequential eight-year run of perhaps the most powerful vice president ever, Dick Cheney, who saw the job differently than Biden does.

With the world watching, Biden raised his right hand and took his oath of office from Supreme Court justice John Paul Stevens. In traditional form, Biden swore to defend the Constitution against all enemies and to faithfully discharge the duties of the office.

“So help me God,” Biden said to an outpouring of cheers from the Capitol platform and crowds below.

Biden shared a few thankful moments with his wife, Jill, and other members of his immediate family. He shared a handshake with Obama shortly before the nation’s new president was sworn in himself.

Both at the White House and at the Capitol, cameras captured gracious moments between Biden and Cheney, who put aside their well-known political differences in favor of grand American tradition.

At a ceremonial lunch in the Capitol’s Statuary Hall, Biden told a gathering of officials from all three branches of government: “Together, there’s not a single, solitary thing we cannot achieve.”

At night, the Bidens were to hopscotch the city, attending inaugural balls into the wee hours.

The vice president’s prescribed role is to assume the presidency in the event of death, resignation or incapacity by Obama. Biden is also president of the Senate, but can vote only to break ties.

Beyond that, his duties can be limited or expansive based on the wishes of his boss, the president.

Expect Biden, who is almost 20 years senior to Obama, to have a vibrant role.

He is a familiar face in Congress, knows world leaders personally, and is not shy in front of a TV camera. For Obama, Biden is a voice of experience, particularly on foreign affairs and national security.

He also lets loose his share of verbal gaffes, sometimes getting himself into trouble.

Obama picked Biden as his No. 2 over several other potential running mates, none more prominent than former first lady Hillary Rodham Clinton, eventually picked as Obama’s nominee for secretary of state.

“This is a partnership,” Biden said the day before the inauguration about working with Obama. “He’s president of the United States, but as I said to him when he asked me, I said, ‘Barack, don’t ask me unless the reason you’re asking me is you’re asking me for my judgment. I get to be the last guy in the room when you make every important decision. You’re president. Any decision you make, I will back.”‘

Yet Biden is interested in reining in the vice president’s role as he succeeds Cheney, whom he bluntly called “the most dangerous vice president we’ve had probably in American history.”

In accepting the vice presidential nomination last summer, Biden said: “For all those people in government who are honoring their pledge to uphold the law and respect our Constitution, no longer will the eight most dreaded words in the English language be: ‘The vice president’s office is on the phone.”‘

Cheney was a major voice on war and harsh interrogation techniques of suspected terrorists, and insists the Bush administration’s moves kept the nation safe.

Biden says he won’t blur the executive and legislative lines as he claims Cheney did. “If he wants to diminish the office of vice president, that’s obviously his call,” Cheney shot back last month.

The vice presidency would seem to cap a career in which Biden has become a Democratic Party elder and a veteran of judicial nomination struggles, world crises and legislative dealmaking. He ran for the presidency twice, first in 1988, and then in 2008, when he competed against Obama. He never came close.

A lawyer by trade, Biden won election to the Senate at a young age and has spent most of his life working there, but has still made a daily train commute home to Wilmington, Del.

His life was shaped by tragedy. Shortly after his election to the Senate in 1972, his wife, Neilia, and infant daughter, Naomi, were killed in a car accident and his two young sons, Beau and Hunter, were critically injured. Both boys recovered fully, growing up to become lawyers.

In 1977, Biden married Jill Tracy Jacobs. They have a grown daughter, Ashley.