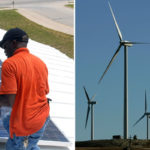 “It’s time we take the next step toward a clean energy future,” Sebelius said.

But Sebelius reaffirmed her opposition to the proposed coal-fired power plants in western Kansas, saying that the federal government is likely to regulate or tax carbon dioxide emissions, which, she said, would make the project economically unfeasible.

The fight over the two 700-megawatt plants near Holcomb likely will be before the Legislature, which starts the 2009 session on Monday. Last year, Sebelius vetoed three bills that would have required construction of the plants.

The plan would allow net metering, which would enable customers to sell back at retail cost any electricity they produce above the amount they use.

That proposal has been bottled up in the Legislature, but Parkinson said that recently the state’s largest electric utilities — Westar Energy and Kansas City Power & Light — have agreed to support the legislation.

Parkinson called that a “significant breakthrough.”

“We’re not going to get in the way of smaller scale renewable energy efforts. The cost impact on our customers will be slight, if not negligible,” she said.

Sebelius and Parkinson said that approval of net metering and codifying the 20 percent portfolio standard of total state energy production — currently that is in place on a voluntary basis — will lure renewable energy companies and manufacturers.

Also, they want legislation to allow bonds for renewable energy plants that would be paid off with the state income taxes paid by the employees of those businesses.

Scott Allegrucci, director of the Great Plains Alliance for Clean Energy, said the energy plan would have a positive environmental impact and “puts Kansas in a much better position economically.”

The Wind Coalition, a regional trade group that advocates for wind resources, praised the plan, saying it would help Kansas develop its wind potential from its current 1,000 megawatts to upward of 15,000 megawatts.

The coalition said Kansas could become a wind development and transmission hub “that can develop and deliver wind power from coast to coast.”

Sebelius outlined her plan one day after a report put out by an environmental group said Kansas could create 11,500 jobs and draw $2 billion in investment in renewable energy.

Frankin and Douglas counties were ranked 12th and 17th, respectively, among Kansas counties that would receive the greatest investment in manufacturing from the development of renewable energy sources, the report said.