Sebelius again passes on Fairchild for next Supreme Court justice 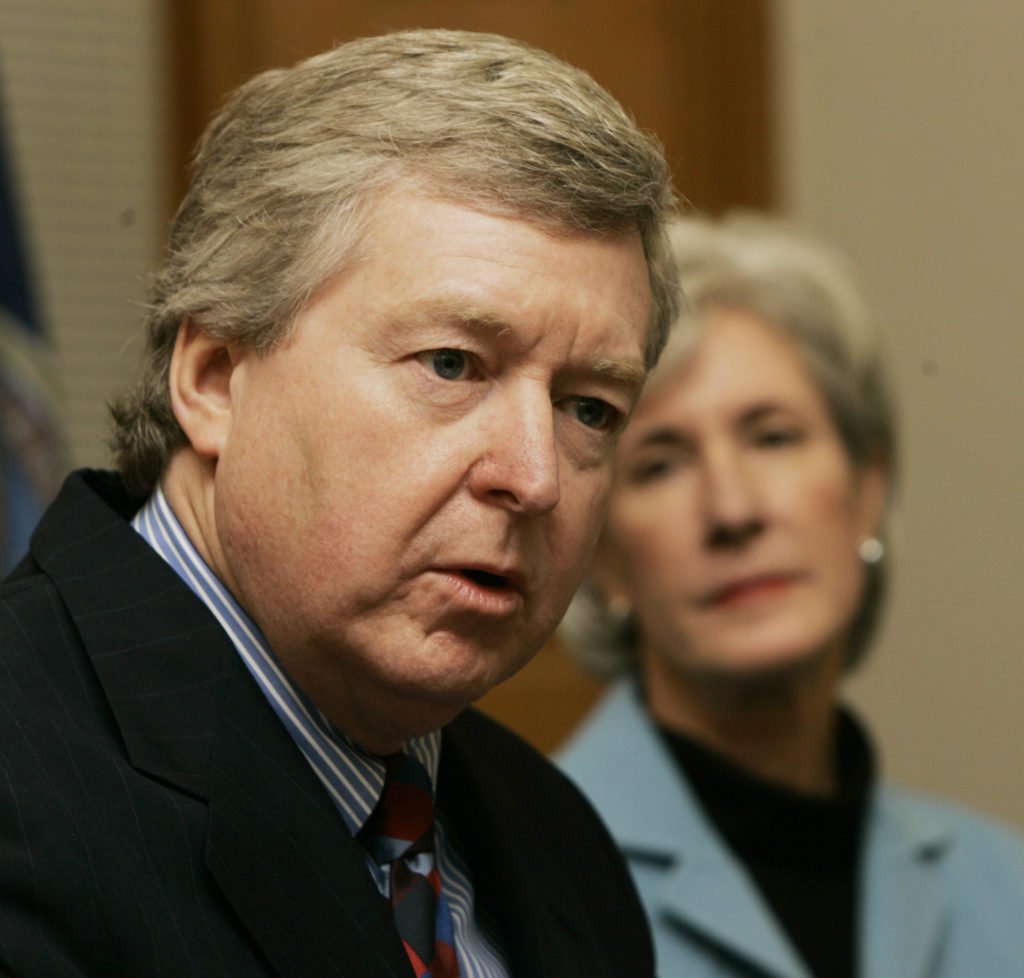 Dan Biles answers questions about his appointment to the Kansas Supreme Court by Gov. Kathleen Sebelius, right, during a news conference in her office in Topeka on Wednesday.

The new justice, Dan Biles, is best known for his work for state agencies. Biles, of Shawnee, represented the State Board of Education in a 1999 lawsuit that eventually forced the state to phase in an $892 million increase in school funding over the past four years.

He’ll replace Chief Justice Kay McFarland, who is retiring Monday after more than 31 years on the court. Biles said he expects to take office in about a month.

Sebelius said she and her husband have been friends of Biles for more than three decades, starting when her husband was an attorney for the Topeka school district and Biles was an Associated Press reporter. She said she has relied on Biles regularly for legal advice since becoming governor.

“Dan has that rare combination of assets which make him ideal for the court. He’s extremely smart and knowledgeable about constitutional law. He works incredibly hard,” Sebelius said during a Statehouse news conference. “My personal is to turn to Dan over and over again.”

Some Republicans were watching the Democratic governor’s decision closely because of Biles’ ties to Democratic Chairman Larry Gates. They’ve been law partners since 1985.

It’s also Sebelius’ fourth appointment to the Supreme Court, making it the first time a governor has named a majority of its seven members.

One conservative group, Kansas Judicial Watch, was critical after Biles became one of three finalists for the court in November.

But Biles is highly regarded by many Republicans. He began his career as a lawyer in the 1980s as an assistant attorney general for then-GOP Attorney General Bob Stephan and has worked with officials from both parties.

Biles successfully defended Sebelius’ decision in 2002 as insurance commissioner to deny the merger of the state’s largest health insurer with an Indiana corporation. He represented the Kansas Lottery in a lawsuit over the constitutionality of a 2007 law expanding gambling and as prospective developers for state-owned casinos were chosen.

“He is well-qualified and has practiced law a good number of years,” said incoming House Speaker Mike O’Neal, a Hutchinson Republican. “He certainly is experienced and I am sure that is what gave him the advantage.”

Biles was a reporter before he was an attorney, working for AP’s Topeka bureau in 1975-80. He took morning law school classes at Washburn University before starting his day at AP, receiving his degree in 1978.

The two other finalists for the Supreme Court vacancy were Kansas Court of Appeals Judge Tom Malone, of Wichita, and Douglas County District Judge Robert Fairchild, of Lawrence. A state nominating commission chose them from eight applicants.

Justices are appointed, but voters decide every six years whether to keep them on the bench. State law prevents them from seeking retention after they turn 70. McFarland is 73 and could not seek another term last year.

McFarland, appointed to the court in September 1977, was its first female member. Only three other justices in state history have served longer than her, and she became chief justice in September 1995.

Her departure automatically will elevate the next senior justice, Robert Davis, to chief justice.

Sebelius’ previous appointments to the Supreme Court were Carol Beier in 2003, Eric Rosen in 2005 and Lee Johnson in 2007.