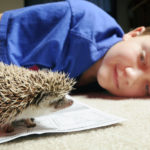 After lobbying the city to make hedgehogs legal, 11-year-old Judson King is now the proud owner of his own pet hedgehog, Little Luke.

Anybody who has been around City Hall for long has seen his type before.

Lobbyist. Attorney. Paid advocate. He’s wearing a suit and tie and carrying a stack full of personalized folders for city commissioners. No one — no one — wears a tie to a City Commission meeting unless they’re paid to.

When it is his turn to speak, he strides confidently to the podium. You know the slick delivery about some multimillion-dollar project or high-stakes city issue is about to commence.

Oh, yeah. He could hardly see over the podium. Maybe it was because he’s 11 years old.

And his subject was a bit different, too — hedgehogs.

Judson King, a sixth-grader at Corpus Christi Catholic School, wanted a pet hedgehog, which can best be described as a 6- to 8-inch long porcupine-like creature. But then he finds out the city’s animal code prohibits hedgehogs in the city limits.

“That really kind of made me mad,” King said.

It did not exactly break the heart of his mother, however.

“I thought, this is my out,” said Judson’s mother, Rebecca Weeks, who has been known to call the creature a “hedge rat.” “Now I don’t have to get him one.”

It was that question that started a three-year crusade to make hedgehogs legal in the city limits. That’s right, it was three Christmases ago that Judson began with his hedgehog hankering. He sent a letter to the city in January 2008 asking commissioners to consider changing the law.

But before that, he had spent the better part of two years employing a two-pronged approach to be ready for his day before the commission.

“I pretty much did research every single night, and I also daydreamed about them,” Judson said — hedgehogs, that is, not city commissioners.

His mother seems to recall that he played some video games, too. But that is beside the point. When it came time to seal the deal, Judson King locked it up tighter than a Ziplock.

Commissioners were impressed with his prepared speech and his personalized folders that included pictures and 14 pages of information about hedgehogs.

Commissioners nor city staff nor a representative of Lawrence Humane Society found any serious reasons why hedgehogs should be banned from the city. There was a brief discussion about fears that the animal — which is native to Africa, parts of Europe and New Zealand — was susceptible to foot-and-mouth disease.

But those fears seem to have subsided over the years. And commissioners noted that state regulators — who are protective of Kansas’ cattle industry — had not found a reason to ban hedgehogs either.

So, it was unanimous. Hedgehogs shall be legal in the city limits. Commissioners gave preliminary approval at their Dec. 2 meeting, though it got overshadowed by the noisier debate that took place that night over whether chickens should be allowed in the city limits. (No, I’m not making this up.)

Final approval was given on Tuesday. But the real day of drama was on Christmas. That’s when Weeks brought down the final Christmas gift — a two-and-a-half-month-old hedgehog named Little Luke.

“She had him in a little carrying case,” Judson recalls. “And he didn’t look very happy about it. He had this look, like, ‘How much am I getting paid for this?'”

The hedgehog — which may not be for everybody, unless you like reclusive, prickly, sometimes temperamental pets — may not have been happy, but Judson was.

He’d scored a political victory and a Christmas coup — all before the age of 12.

“When I was through with all this, I really thought it was a great experience,” Judson said. “I thought if there was anything else that I needed from the city, I could try this again.”