Oil: from boom to bust 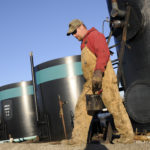 David Ericson checks an oil tank battery this week east of Vinland. Ericson makes daily rounds inspecting dozens of area oil wells and tanks for Colt Energy. The number of new oil wells drilled in Kansas in 2008 dropped off. Colt hasn’t shut down any producing wells, but it is slowing future drilling.

The black gold rush is over.

After a tumultuous year that saw oil prices reach $140 per barrel before collapsing to the current $40 level, the Kansas oil industry is making adjustments.

“I had always told people that probably the only thing that would bring the price down would be a global recession, and boy, did we get a global recession,” said Nick Powell, president and director of Colt Energy Inc., in Fairway. Colt has oil and gas wells in eastern Kansas, including Douglas County.

Still, Powell and others were surprised to see how quickly oil prices fell.

“No one thought $140 for a barrel of oil was sustainable, but they were comfortable in the $70 range,” said Lynn Watney, who monitors the oil industry at the Kansas Geological Survey in Lawrence.

Motorists are happy to see the drop in oil prices result in lower gas prices at the pump. But despite those declines, Kansas oil producers are still faced with high operating costs. When oil prices went up, the cost of equipment and material needed to drill more wells also went up and became highly inflationary, Powell said.

“Those costs don’t come down very fast,” he said. “We’re not seeing our costs go down comparable to the price drop in oil and natural gas.”

Kansas oil producers used the past couple of years to fix equipment and update technology along with opening new wells and enhancing production in old wells, Watney said. They did not splurge carelessly when the price of a barrel surpassed $100.

“I think that Kansas was pretty conservative. They looked at the big picture,” Watney said.

Oil companies are scaling back their operations, however. Although not all statistics have been figured, oil production in Kansas for 2008 is showing a considerable decline from 2006 to 2007 when production was more than 37,000 barrels. The latest statistics showed production in 2008 at 28,664, according to the Geological Survey.

Colt hasn’t shut down any producing wells, but it is slowing future drilling.

“We’re probably still where we are able to make money above operating costs, but you don’t pay off capital expenses to put wells in with a slight profit on your operating costs,” Powell said.

Will a barrel of oil remain in the $40 to $50 range for the foreseeable future? Watney isn’t sure. The industry would prefer prices in the $70 to $80, which would make it easier to afford operating costs, he said.

There are new technologies for finding and capturing oil that will eventually be used as oil prices justify the cost of implementing them, Watney said. Kansas oil is sometimes difficult to find and bring to the surface because it is in pore spaces among rock layers.

It is estimated that Kansas has about 7 billion barrels remaining below the surface, Watney said.