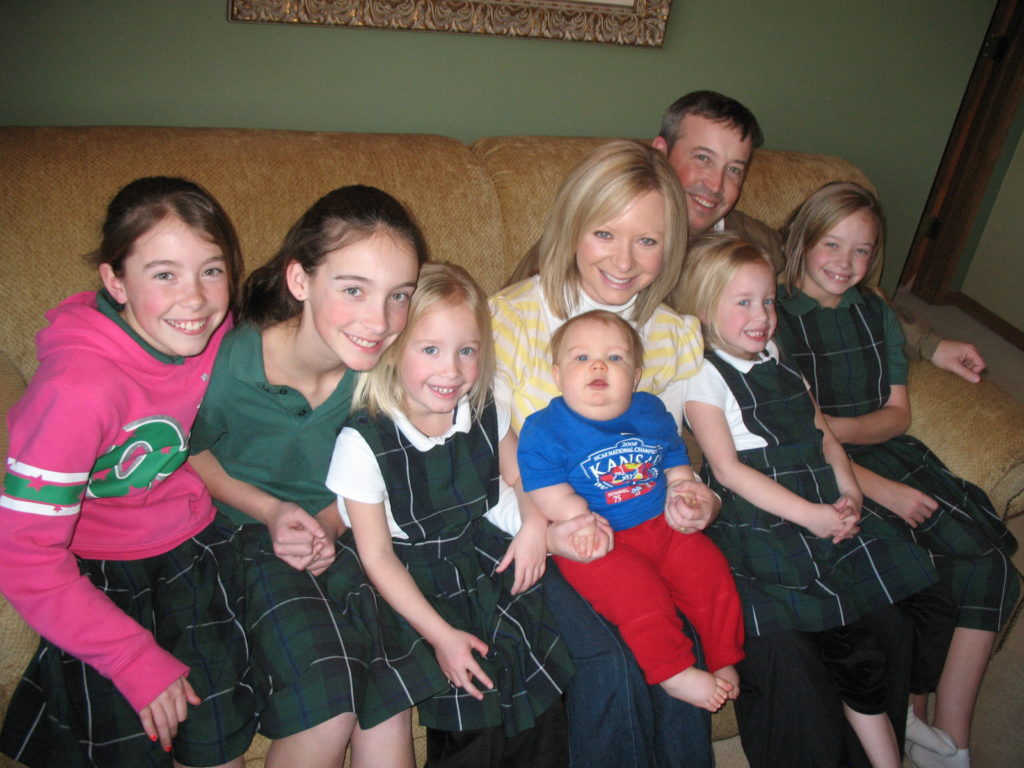 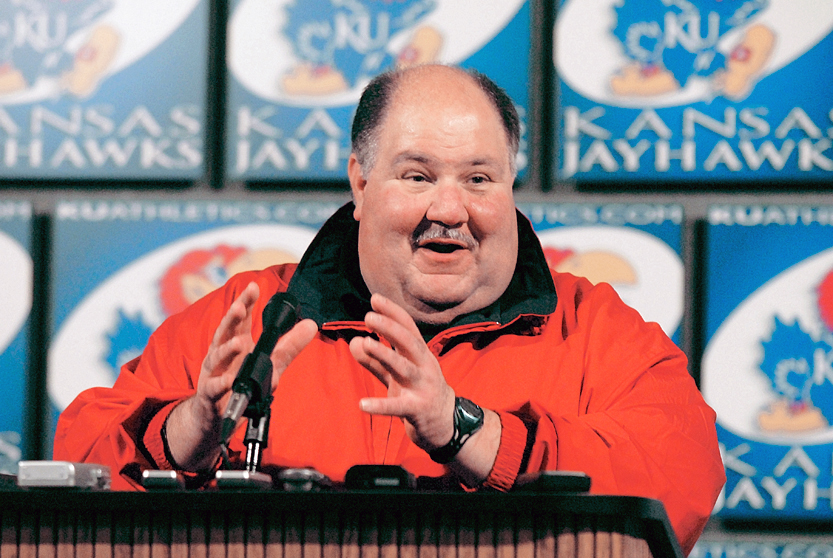 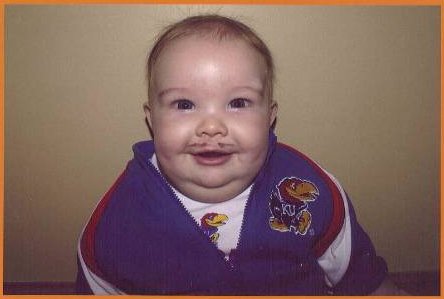 Bode Lubbers has been featured on ESPN’s “Pardon the Interruption” among other public appearances, but has not yet met his mentor, Mark Mangino.

Wichita ? Not long ago, it came to light that Baby Mangino — the rotund infant who recently earned a great deal of national attention for his Halloween costume depicting Kansas University football coach Mark Mangino — did not actually go trick-or-treating as a college football coach.

This was revealed on a Tuesday evening last month, as Baby Mangino was lounging on the carpet of his family’s home, sucking on his fingers. Baby Mangino, who is actually 8-month-old Bode Lubbers, lives at the end of a cul-de-sac in an affluent Wichita neighborhood with his mother, Angie; father, Billy; and five older sisters who sometimes tie his hair into a ponytail. Bode has big, curious eyes, a plop of sandy-colored hair and arms that are simultaneously soft and blocky in nature — like marshmallows stacked on top of each other.

Being a celebrity baby — like Bode very much is — is kind of like being an ordinary celebrity in the sense that people tend to make assumptions about you and your personal life. And at the moment, Angie was clearing up some common misconceptions about her son’s New Hallow’s Eve exploits.

As it happens, turning your baby into a bite-sized version of Mark Mangino is not an especially difficult task. It requires a miniature KU track suit ($24.99, Target), a tube of brown Mary Kay eyeliner ($10, consultant) and approximately five minutes. Having each of these things handy one evening a couple of weeks before Halloween, Angie — long noticing the resemblance between Bode and Kansas’ Orange Bowl-winning coach — tugged the tracksuit onto her son, penciled on an eyeliner mustache and snapped a photo. Pleased with the outcome (“He gave us his best Mark Mangino look that day,” Angie admits), she drove to Walgreens, had 20 “Happy Halloween” cards printed, sent them to some friends and family members and kind of figured that that would be that.

Instead, the photo was met with quite a bit of fanfare, and before long, it had found its way onto the Internet, where — as is known to happen in these sorts of situations — one person sent it to another person who sent it to another person, until one day, presumably, someone at the sports-media Web site Deadspin.com opened an e-mail, found a mustachioed infant looking back at him, and decided — understandably — that this was something that needed to be shared with the world.

And so it was.

Since then, Baby Mangino has been popping up all over the place. Tony Kornheiser and Michael Wilbon, hosts of ESPN’s ultra-popular “Pardon the Interruption” program, devoted a portion of a recent show to Baby Mangino, as did MSNBC’s Keith Olbermann. Bode has been featured on multiple local news channels, meanwhile, and not long ago, he earned the distinct honor of being named Deadspin’s Sports Human of the Year, after winning an online competition pitting him against such household names as Dallas Mavericks owner Mark Cuban, ESPN personalities Erin Andrews and Chris Berman and the writer/editor Buzz Bissinger.

It would be understandable if Bode’s recent foray into the national limelight resulted in boosted feelings of self-importance, but he has mostly managed to remain level-headed about the whole thing. Yes, he kind of expects his parents to wait on him hand-and-foot, and sometimes, in the occasion that his apple juice is not presented in a timely manner, he can get a little whiny. But otherwise, he is a very easygoing and likable baby. When he smiles up at you, with drool leaking out of his mouth and dribbling down his chins and landing in a pool on his Kansas football T-shirt, it is very difficult to dislike him — even if you are trying to.

When he is not busy impersonating college football coaches or appearing on SportsCenter or winning sports human of the year awards, Bode spends a great deal of his time engaged in normal baby pursuits: eating jars of Gerber baby food, playing in his Johnny Bouncer, being chauffeured about town by his parents. His favorite pastime, however, seems to be challenging the structural integrity of various household items. He does this by picking up an object, looking it over for a moment or two, and then placing it in his mouth, where it is subjected to a lengthy and strenuous gnawing-on.

Stationed on the floor of his family’s living room on a recent Tuesday afternoon, for instance, Baby Mangino feasted upon — at one point or another — a yellow plastic block, an elastic headband, his fingers, a toy race car, a string of his sister’s hair and the rubber nipple on his bottle of apple juice.

Due largely to these snacking tendencies, Bode’s frame has developed a bit of girth over time. Despite entering the world at a very average 7 pounds, 11 ounces, he is now tipping the scales at a very husky 27 pounds (and growing). As a result, Angie sometimes finds herself surprised at just how robust her only son has become. A few weeks before Christmas, for example, she was shopping at the department store Von Maur when she decided it might be a good idea to pick up a “Baby’s First Christmas” outfit for Bode. She looked and looked, but unable to find an outfit in her son’s size — 18 to 24 months — Angie approached a sales clerk.

“Excuse me,” she said. “I cannot find anything bigger than 12 months.”

“Well, you wouldn’t want a size 18 months,” offered the clerk, “because it wouldn’t be their first Christmas.”

In the case of their youngest child emerging as such an Internet sensation, Angie and Billy express feelings of bewilderment, like they are not quite sure, in the aftermath of it all, how the whole thing seemed to happen. But seeing as how it did happen, they have decided that the appropriate next step would be to snap a photo of the Manginos together. Currently, it is unclear if Adult Mangino is aware of Baby Mangino’s existence — or how, exactly, the 2007 national college football coach of the year feels about being immortalized by an 8-month-old infant from Wichita.

This has not managed to dampen the family’s hopes, however.

“We just need somebody to set us up with Coach Mangino,” Angie said.

Right about then, Bode, who was in the process of consuming the head of a toy penguin, emitted an extended burst of flatulence that sounded a little like a machine gun. His older sisters, recently home from school, giggled from across the room, and Angie looked down at her smiling baby, made a funny face and said, cooingly, “You’re gassy!”

She then turned back toward a visitor, smiled and went on to say she hopes a meeting between the two Manginos can be arranged sooner rather than later.

“After all,” she said, wiping a stream of slobber from Bode’s chin, “He’s not going to look like Mark Mangino forever.”