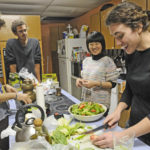 Well before MTV’s “The Real World” and even before the iconic Sunflower House cooperative, there was Koinonia. It’s the original test of what happens when strangers are picked to live together — warts, homework, undone chores and all.

You’re not the first one to be surprised — friends and classmates are routinely shocked by the six residents’ address.

“It is a little bit weird because no one expects it. Whenever I tell people I live down there, they’re really surprised,” says Danny Spence, a Kansas University junior. “A lot of people have no idea that it exists.”

Oh, but it does. And it’s been around in its current form since the ECM building was in its infancy in the early 1960s, says ECM pastor Thad Holcombe. Holcombe says Koinonia traces its origins to a women’s cooperative that started at KU in the 1940s. When the ECM building was built in 1960, then-pastor John Patton and his wife lived in the building and designed extra apartments for students.

“They left after one year, after the building was built, and it was turned into an intentional community,” Holcombe says. “So it’s basically been here since 1960 in this building and prior to that going back to the ’40s. But it had become coed and not just women’s … in the 1960s.”

Besides the change of venue and logistics, Koinonia also adopted its current moniker (it means fellowship in Greek) and adopted a covenant of rules that its residents must live by. Holcombe says these rules include 45 hours of community service per semester, as well as a two-hour time block each week in which the residents get together as a community to have dinner, discuss house issues and talk about life in general. Also, per the covenant, the current members get to interview any possible roommates when there is an opening. In exchange, they get to live practically on campus, avoid paying utility bills and get a great room rate in the neighborhood of $300 per month.

“As it is now, the intention of the Koinonia is to be an alternative to kind of the busyness of the university and asking, which is very difficult, which is asking the participants to stop during the week for two hours to eat together,” Holcombe says. “Which is very significant to have that whole table fellowship, which is a long, liturgical religious tradition.”

And that might be the only religious tradition to which the community sticks explicitly. Though the ECM is a Christian organization, one doesn’t have to be Christian to participate in Koinonia. Holcombe says there have been Jewish residents, Baha’i residents and residents with no faith tradition.

“I definitely think of myself of a spiritual person, and one of the coolest things about Koinonia is how accepting it is,” Spence says. “And so that was a really reassuring thing for me, that like, I could get involved with this thing that had a Christian basis but that I wasn’t going to be pressured into anything, or into believing any certain thing.”

When the six roommates living together this semester get together, it is most notably a gathering of very different folks. There are three girls and three guys. All have different majors, are at different stages in their academic careers and are from different places.

Andy Green, a senior from Wichita, has lived in the community for two years. He says that living in such close proximity to others who may or may not be like him has taught him invaluable lessons.

“Basically, when you are living so closely with people who are sort of different, a lot of preconceptions are knocked down. When you get to know a person close, you realize that they’re human. You realize that they’re a person and you can’t just judge a person by what they do,” Green says. “It allows you to be much more open-minded about people in general probably because you get to know people. And you learn about sort of different ways to approaching life. I mean, everybody handles things differently. We all have different approaches to how we deal with things. It’s very much about the human aspect of that.”

Green and Spence actually have quite a bit of experience with cooperative living. Both lived in the Sunflower House, a long-standing cooperative at 1406 Tenn.

“(Green) moved out and then told me about it and it just sounded cool because it was the same kind of co-op community living but on a much smaller scale,” says Spence, who notes that 30 people can live in the Sunflower House at once. “So Koinonia kind of boils it down to six, which seemed like a number where I could get to know people on a better basis and still have that community support.”

Unfamiliar with the concept of cooperative living was Chelsea Zhou, a senior from Sichuan Province in China, who says she was pleasantly surprised by the cooperative experience when she moved in at the beginning of the fall semester.

“Before, it was just me, myself. I was an only kid with my family. It’s an experience to share with many people, boys and girls. It’s the first time I’ve had boy housemates or flatmates,” says Zhou, who found the community after her former roommate graduated. “I don’t feel any inconvenience or anything. They are all really, really good people. We respect each other.”

Zhou says she really enjoys the community’s weekly dinners and the laid-back attitude that prevails in at Koinonia. But, more than anything, she says she likes getting to know her roommates one meal and interaction at a time.

“In our group, we have very different types of people. It’s very interesting,” Zhou says. “We all have different wisdom that we can share with each other.”