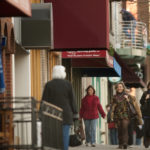 Shoppers walk along the sidewalks of downtown Lawrence in this file photo. The population in Lawrence made a surprisingly large increase in 2009.

In 2008, the most recent figures available, Kansas University spent the following amounts with Lawrence businesses:

When Lawrence Chamber of Commerce President Tom Kern hears of another faculty position being held open at Kansas University, he thinks well beyond the students who won’t be educated that semester.

He thinks of the person who won’t be moving here from a community like Little Rock, Ark. That person won’t be buying a home in Lawrence, and one real estate agent won’t be earning a commission.

Grocery stores will likely be selling thousands of dollars less in grocery sales, and Home Depot won’t be getting a visit to help fix anything that goes wrong with the new house.

As Kansas University begins to parcel out another round of state budget reductions, the effect will continue to be felt in the Lawrence community.

“They’re the economic engine that drives Lawrence,” Kern said, adding that the whole community hurts when KU has to absorb cuts to its personnel.

“The ripple effect is huge,” he said. “But it’s done in little pieces.”

KU’s hits have been substantial. The university has been cut by $36.6 million — about 12 percent of its state funding — including “unfunded mandates,” where the Legislature requires KU to spend money on a certain area without fully funding it.

That has meant about 200 fewer faculty and staff working across the KU campuses, including more than 125 positions in Lawrence, more than half of which were teaching positions.

“The budget situation has deteriorated rapidly,” KU Chancellor Bernadette Gray-Little said at a recent budget forum at KU. “And the expectation is, from the forecasts that we have received, is that there will be further decreases for the next year.”

And more people in Lawrence are paying attention to the budget crisis than just KU employees. One of them is Mike McGrew, CEO of McGrew Real Estate in Lawrence.

“We absolutely care about the employment levels at the University of Kansas,” McGrew said. “It matters a lot, especially when they’re the single biggest employer in the city.”

They, like many other businesses in town, feel the ripple effect of KU’s 9,872 employees as of last fall, and their more than $300 million in spending. That’s before taking into account several major economic development efforts for the state — including bioscience and cancer efforts.

Keith Yehle, KU’s director of federal relations, said that in some Kansas communities major businesses drive their economic engines. In Wichita, for example, the major industry base comes in the form of companies like Sprint Aerosystems, Cessna and other aviation industries.

“We’re trying to convince the greater Lawrence community that our impact is just the same,” Yehle said.

Charles H. Whiteman, an economist at the University of Iowa, prepared a report in 1994 that examined the economic impact of state spending on that university. The report was updated in 2000, and nearly identical results showed that the figures likely withstood the test of time, Whiteman said.

He used a variety of economic multipliers from the U.S. Department of Commerce to calculate the indirect impact of the $240 million in state dollars spent on university activities.

The University of Iowa is often cited by KU as one of its peer institutions, and Whiteman — who earned his undergraduate degree at KU — said the study probably applied well to KU and Lawrence, which he said could likely be similarly compared to the University of Iowa and Iowa City.

The effects of these cuts have obvious implications for their surrounding communities, which house the vast majority of the university’s employees, he said.

Whiteman found that generally, the economic impact of his university was twice its budget. So if a university like Iowa or KU had a budget of $1 billion, the total economic activity generated by the school would be $2 billion. Accounting for dollars spent in other states, Whiteman said a multiplier for in-state dollars generated would be more like 1.4 times its budget.

It also works for the personnel at the university, too, he said. The economic activity for each of the 17,000 employees of a university allows another 24,000 people in the state to hold their own jobs.

Still, he says that while university administrators sometimes enjoy presenting facts in that manner, he thought the university should not be judged in the end from a purely economic basis.

“I try to emphasize that the university is not an employment scheme,” he said. “You should measure its impact by how well it serves its purpose.”