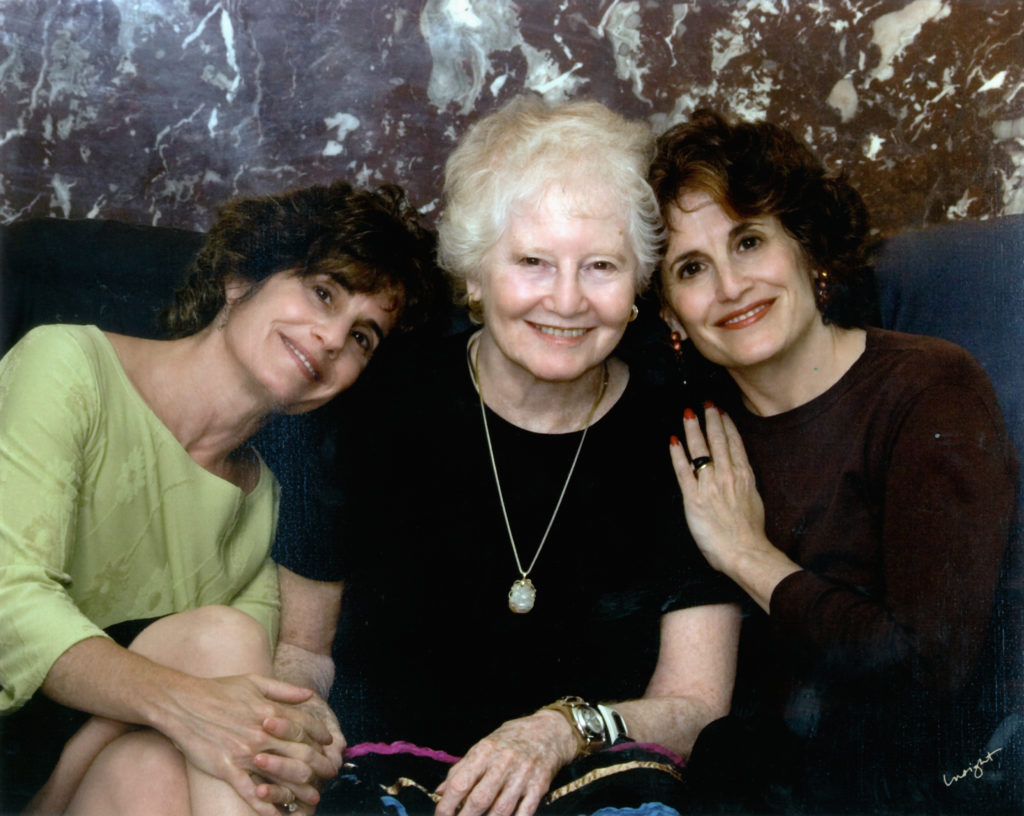 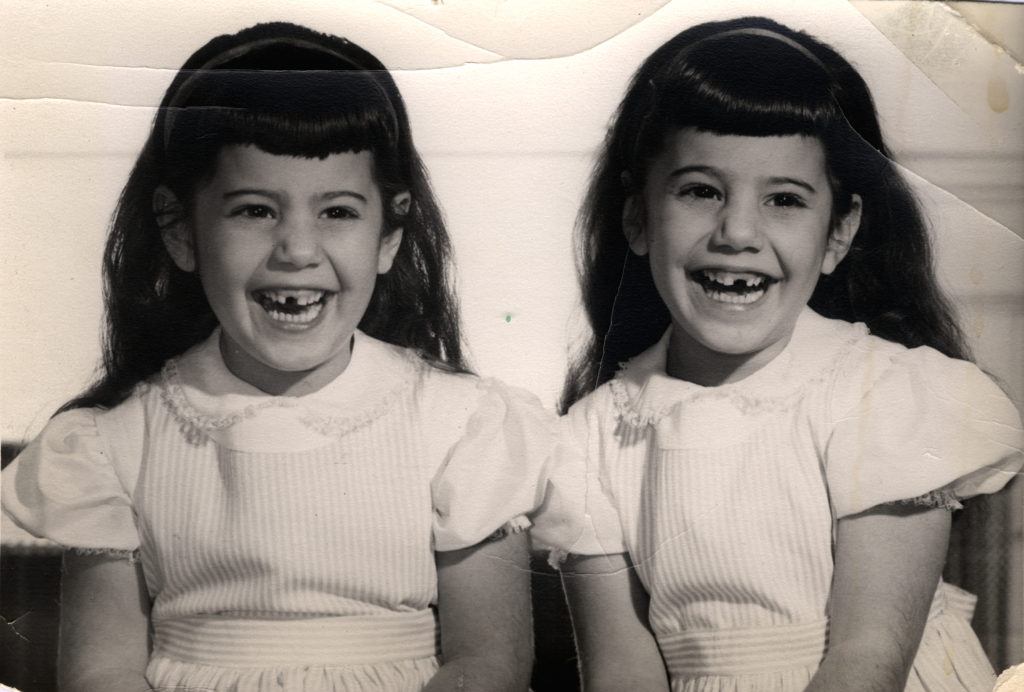 Alice and Mary Lieberman are not sure who’s who in this picture, taken in 1957. (Note the mirror image missing teeth.) 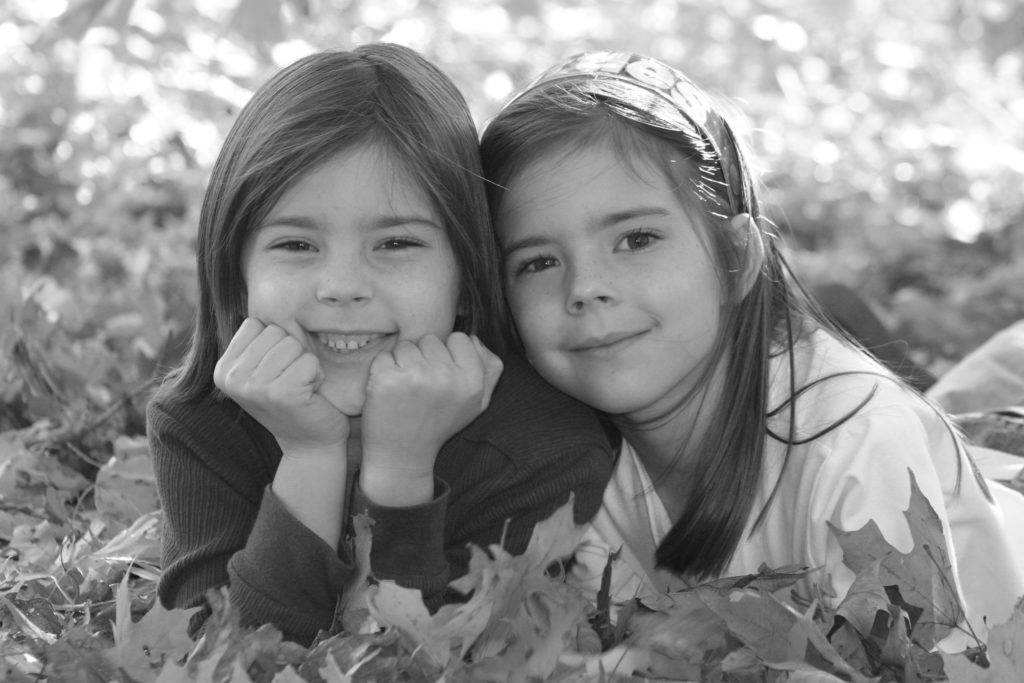 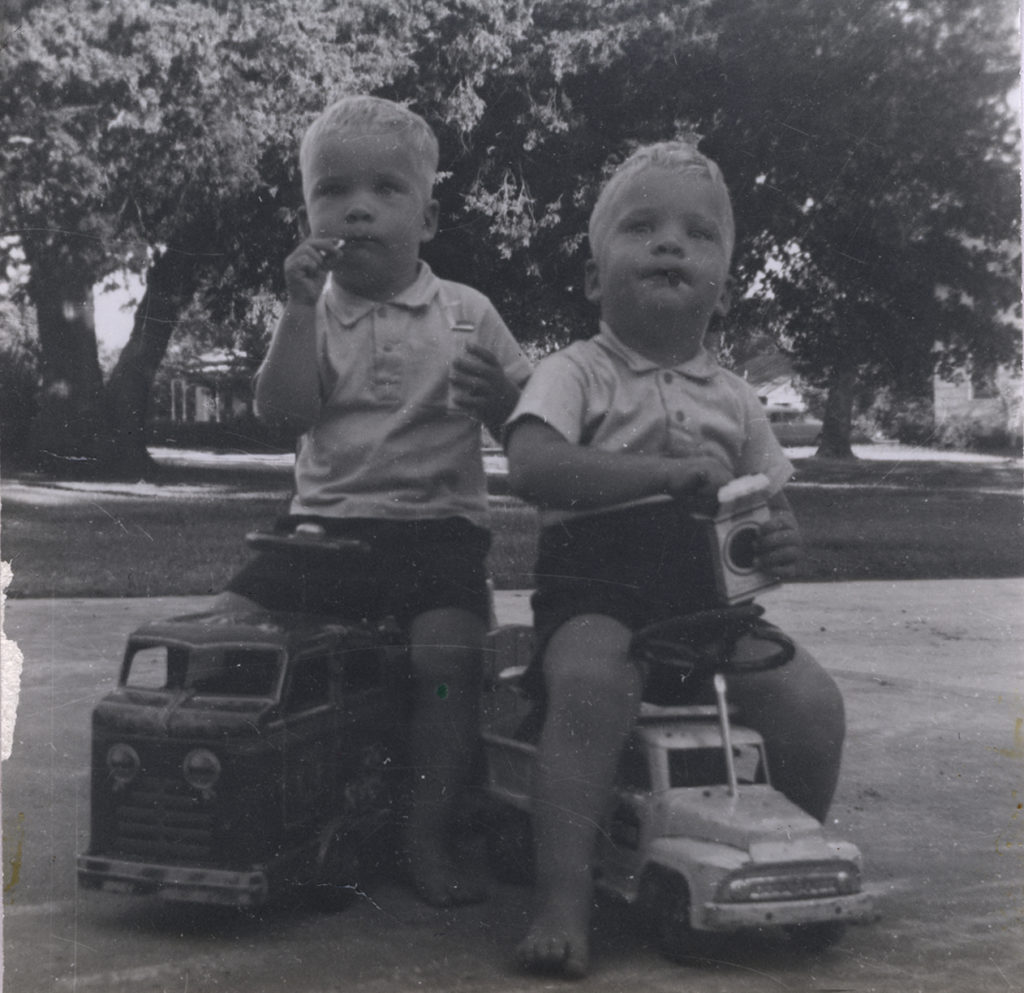 Bill and bob fleming enjoy a candy cigarette break together following an afternoon drive in the early ’1960s. 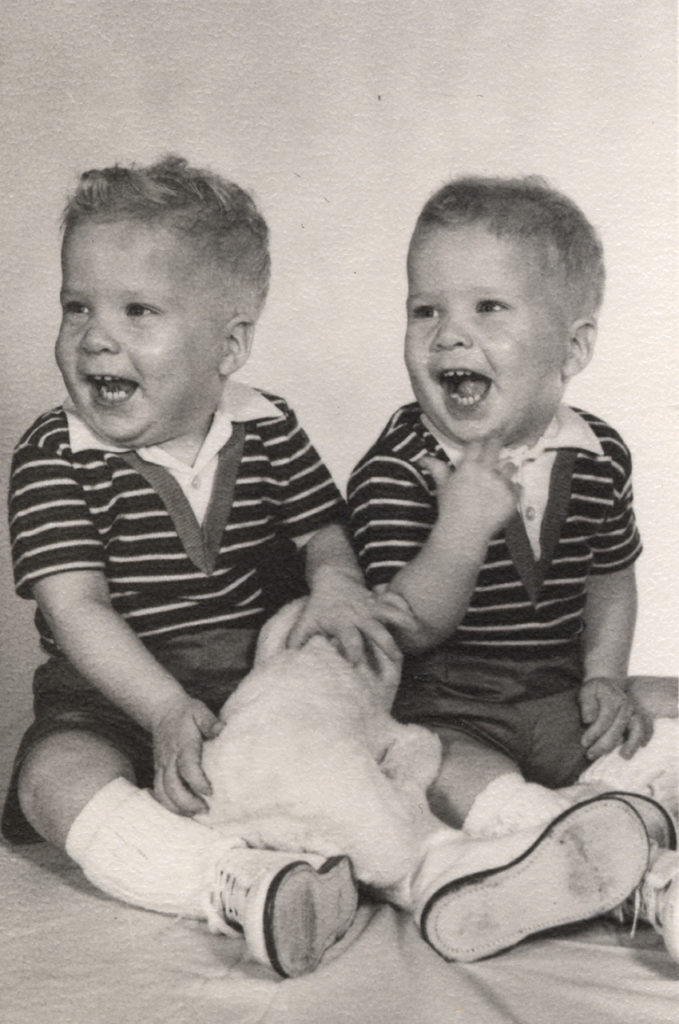 Bill and Bob Fleming, pictured in 1963, are identical twins and still experience the occasional case of mistaken identity — even by Bob’s 15-year-old daughter.

Identical twins Bill and Bob Fleming look so much alike, even their own family members can’t tell them apart.

“The other day, I was waiting for my brother to gather up his gear to go hunting down in Madison, Kansas,” recalls Bill, of Lawrence. “His whole family was there in the kitchen, and he was in another room getting ready. His (15 year-old) daughter walked in to get breakfast. After talking to everybody for a while, she turned to her mother and said, ‘You know, he sure sounds a lot like Uncle Bill today’ … not realizing that I was, in fact, Uncle Bill. And that’s his own daughter!”

All identical twins can tell tales of mistaken identify, but some share a psychic connection that goes beyond their mystifying mirror image.

“My phone can be ringing while I am dialing out and it’ll be him calling me while I’m calling him,” claims Bob, who lives in Louisburg and talks to his twin every day. “It happens all the time.”

“There is no doubt in my mind there is something psychic going on. We have stories of one twin getting hurt in an accident and the other one feeling the same pain, or even bleeding. Some get premonitions that something terrible has happened to the other. It’s hard to explain, but it’s there.”

Alice Lieberman of Lawrence, whose identical twin sister lives in Dallas, has a different take.

“We’ve never had any of that ‘feeling each other’s pain’ business. Although, if I’m in the room with her, I know what she’s thinking. I can tell. I wouldn’t say it’s reading her mind, it’s more reading her face. I know her so well.”

“I’ve never had a feeling of her physically suffering in any way. It’s not that kind of connection. But I certainly know what she’s going to think. Our ideas, our philosophies and our tastes are exactly alike. Except for clothes — my taste is much better than hers. And it shocks me to no end that if she says there’s a movie she loves and I don’t. I feel like she’s lying, like she’s violating the contract!”

Katie Sadley of Lawrence has a male twin and fraternal twin daughters. She thinks the mind-reading phenomenon is exclusive to monozygotic (or identical) twins who are born from a single fertilized egg which divides into two separate embryos.

“I’ve never had that kind of connection with my brother, and my girls don’t have it either, “Sadley says. “They came from different eggs and are two very different people, even though they grew up in the same environment.”

Dr. Nancy Segal, professor of psychology and director of the Twin Studies Center at California State University, believes telepathy between either kind of twins is a myth.

“We do hear of things like this happening between identical twins more often than fraternal, but it isn’t telepathy,” says Segal, whose books include “Entwined Lives” and “Indivisible by Two.” “They’re merely coincidences that occur when two people are so much alike in the first place. It’s nature and nurture — same heredity, same environment. (Identical twins) come from the same egg, and they tend to have the same general thought patterns, intelligence levels, likes and dislikes.”

As for the bizarre accounts of twins physically feeling each other’s injuries or illness?

“There’s no evidence to support those stories,” she answers. “There’s just no proof.”

But Paula Wombwell, Tonganoxie, mother of identical 6-year-old girls and board member of the National Organization of Mothers of Twins, begs to differ.

“I’ve had countless incidences of this happening, especially when the girls were younger,” Wombwell says. “If one of them was upset — and so upset she was crying and couldn’t speak — the other one would be able to tell me what was wrong.”

“When they were around 3 or 4, I had Heather with me in the classroom where I teach. Catherine was in her preschool class in the gymnasium, downstairs. My door was shut but I could hear Catherine crying down below. I said to Heather, ‘Let’s go check on Sister to see if she’s OK.’ Heather said, ‘Well, so-and-so just ran over her with a scooter.’ So I went around to a window, which was too high for (Heather) to see out of, looked in the gym and saw Catherine’s teacher soothing her, and that she was all right. That night while driving to Lawrence, I asked Catherine what happened in the gym and she said, ‘So-and-so ran me over with a scooter.’ And it was the right so-and-so! There’s just no way Heather could have seen that.”

“I’m not a weirdo that comes up with fanciful things, but that stuff truly makes me say ‘Wow.'”