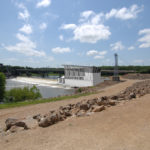 This is a Bowersock Mills and Power Co. rendering of a proposed hydroelectric plant on the north side of the Kansas River. This is an east elevation looking west from the top of the river levee.

The ink is barely dry on the design for the Bowersock Mills & Power Company’s proposed $13 million hydroelectric power plant on the north bank of the Kansas River.

But Bowersock plant manager Rich Foreman can already picture it in his mind: A slender glass structure just east of the downtown Kansas River bridges that will shine at night to show beautiful blue generators producing green electricity.

“It is going to be a real gem over there on the river,” Foreman said.

Bowersock officials on Thursday evening hosted a meeting for about 70 members of the public to unveil the design of the power plant they hope to build directly across from their existing plant on the Kaw.

The project won some key support from an area neighborhood group.

“We’re 100 percent in support of it,” said Ted Boyle, president of the North Lawrence Improvement Association. “We think green energy is going to be a big part of the future.”

Now, the project has to win key federal permits and find funding. Lawrence-based Bowersock announced in July that it had filed for a permit for the plant with the Federal Energy Regulatory Commission. Thursday’s public meeting at the Lawrence Visitor Information Center was part of the permit process.

Bowersock executive Sarah Hill-Nelson said the company hopes to know whether it will secure the necessary permits by late 2010.

People who attended the meeting left with one definite impression: The building will change the skyline of North Lawrence. The plant only will be 40 feet wide, but it will be about 60 feet tall. The building will be slightly taller than the Kansas River bridge, which will be just west of the building.

The plant also will jut into the river about 150 feet, taking it to the north edge of the existing Bowersock Dam. The building will be designed so water can flow through it, and when the water reaches certain levels, the back side of the plant will feature a cascading waterfall.

Thus far, the size and prominent nature of the building haven’t sparked concern.

“I think it will complement the big City Hall on the other side of the river,” said Mike Thompson, a Lawrence resident who attended the meeting.

Plans call for the project to also increase public access to the river. Hill-Nelson said Bowersock would build a new area where canoes could be launched into the Kaw, and also a new fishing platform that would be near the downriver side of the plant. The plant won’t interfere with the hiking trail atop the adjacent river levee.

The project will require a federal environmental study, but hasn’t yet faced major objections from environmentalists. Carey Maynard-Moody, a Lawrence resident who is on the executive committee of the Kansas chapter of the Sierra Club, said the group is still reviewing the project. But she said the group would balance any concerns the project may create for the river with the need to produce more green energy.

“We are one of the species, too, and we have a lot to lose with the destabilization of the climate,” Maynard-Moody said. “We know we need to find new ways to produce electricity.”

The new plant would more than double the amount of electricity the company could produce. Hill-Nelson estimated that the north plant, combined with the existing plant, would be able to produce enough electricity for about 4,500 homes.

In addition to the plant — which would have foundations 40 feet deep to ensure that it doesn’t float away — the project would include installing taller flash boards to the top of the existing dam.

The new boards would allow the upstream pool of the river to rise by about 1.5 feet, but Bowersock leaders said a study showed the higher water levels would not produce significant upstream flooding.

Bowersock leaders also assured the crowd that the Army Corps of Engineers would be doing assessments to ensure that the plant would not create too much pressure on the Kansas River levees.

Hill-Nelson said the next step for the project will involve finding funding. The company hopes to sell a long-term power contract to a small Kansas community that operates its own electric utility.