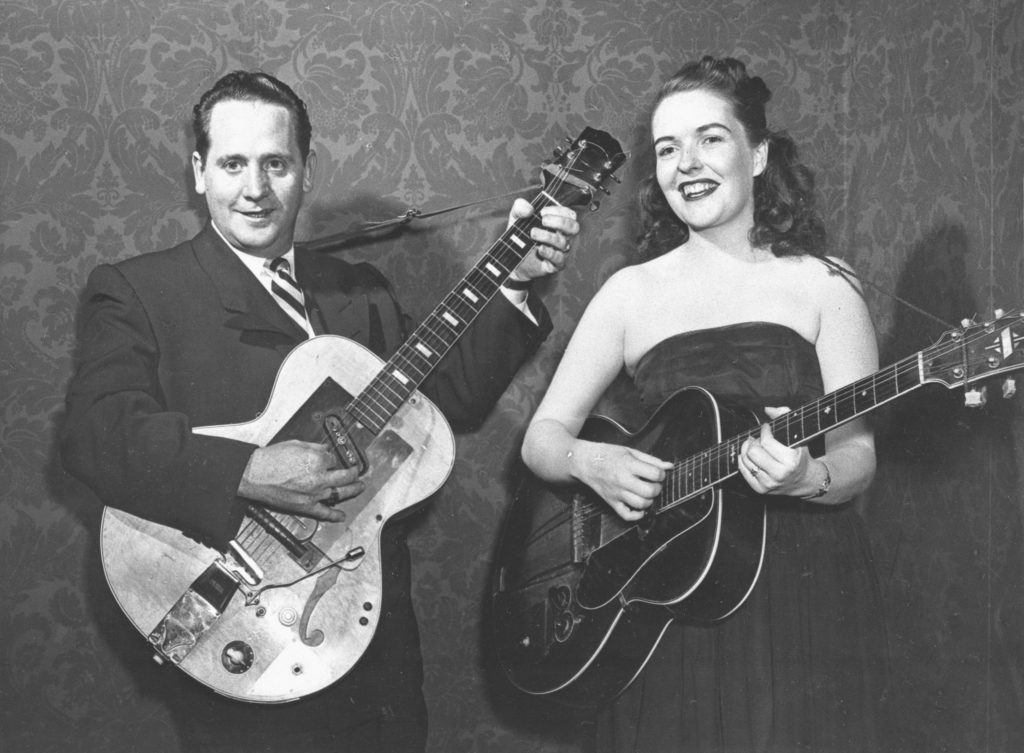 Les Paul and his wife, Mary Ford, perform with their guitars in this 1951 file photo. Paul, the guitarist and inventor who changed the course of music with the solid-body electric guitar and multitrack recording, died Thursday.

Washington ? Les Paul, a Grammy Award-winning guitar virtuoso and inventor of the solid-body electric guitar who helped bring his instrument to the forefront of jazz and rock ‘n’ roll performance, died Aug. 13 at a hospital in White Plains, N.Y. He was 94 and had pneumonia.

Paul first came to prominence for his fast and flashy jazz-guitar style, backing such entertainers as Bing Crosby and Nat King Cole. In the 1940s and early 1950s, he and singer Mary Ford, his wife, had hits with “How High the Moon,” “The Tennessee Waltz,” “Vaya con Dios” and “The World Is Waiting for the Sunrise.”

All along, he refined musical inventions in his workshop. He was an early designer of an electric guitar that had a solid body, and his model managed to reduce sound distortions common to acoustic instruments.

He actively promoted such guitars for the Gibson company, and the Les Paul line of guitars became commonplace among such musicians as Eric Clapton, Pete Townshend and Jimmy Page.

Paul called his first solid-body guitar “the Log.” It was made of a four-inch-thick piece of wood from a nearby railroad track, a neck he borrowed from an Epiphone guitar and two pickups to give it the electric pulse. Audiences and music executives laughed at the ungainly device, and he spent years honing its visual appeal.

He said his efforts were toward one goal: to change the way people saw the guitar.

“I wanted people to hear me,” he told the publication Guitar Player in 2002. “That’s where the whole idea of a solid-body guitar came from. In the ’30s, the archtop electric was such an apologetic instrument. On the bandstand, it was so difficult battling with a drummer, the horns, and all the instruments that had so much power.

“With a solid-body, guitarists could get louder and express themselves,” he said. “Instead of being wimps, we’d become one of the most powerful people in the band. We could turn that mother up and do what we couldn’t do before.”

He played a key role in developing the eight-track tape recorder and used the device to play many parts on the same recording, a process now called multi-tracking. Such early work in overlaying sound contributed to the richness and distinctiveness of his recordings.

Paul earned the nickname “the Wizard of Waukesha,” after the Wisconsin town where he was born Lester William Polfuss on June 9, 1915. His father was an auto mechanic.

As a boy, Paul taught himself music on his mother’s player piano, mimicking the notes with his hands. An admirer of the blues and country troubadours he heard on the radio, he imitated their songs with his harmonica and mail-order guitar. He played both instruments simultaneously by making his own harmonica holder.

As a teenager, he played at a drive-in restaurant, where he experimented with amplified sound to reach the open-air audience. He stuck a phonograph needle inside his acoustic guitar and wired it to a radio speaker.

In the late 1930s, Paul became a consultant to the Gibson company, testing its new models. Not until a decade later, in 1952, and after a rival company developed a similar model, did Gibson see the selling potential of Paul’s solid-body electric guitar. It sought his endorsement on its own design.

In the early 1940s, Paul worked for Armed Forced Radio Service and became a staff musician at NBC, accompanying the Andrews Sisters and other pop singers.

After hundreds of false starts, he began recording with the new devices in the late 1940s, and the results can be heard on such numbers as “Nola,” “Josephine,” “Whispering” and “Meet Mister Callaghan.”

His version of “Lover” contained eight overdubbed electric guitar parts, which Paul electronically wove into a single record. It was a sensation.

Married at the time, he also had been seeing Ford, whom he had hired as a singer and guitarist. In 1948, both were in an auto wreck on an icy patch of road in Chandler, Okla., that almost killed Paul.

Paul’s right arm was crushed, and one doctor suggested amputation. Instead, he had it fixed at a right angle so he could play his instrument.

The next year, Paul divorced his first wife, Virginia Webb Paul, and married Ford. The new couple settled in Mahwah, N.J., and continued to work together on a series of albums for Capitol and Columbia in the 1950s, including “The New Sound” and “Time to Dream.”

The rigorous touring schedule and Ford’s alcohol addiction damaged their marriage. Meanwhile, the public demand for rock ‘n’ roll harmed their careers. They divorced in 1964.

Paul was inducted into the Rock and Roll Hall of Fame in 1988 and won two more Grammys, in 2006, for his album “Les Paul & Friends: American Made, World Played.”