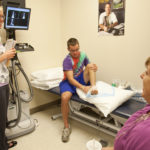 Where to start looking for a doctor

Dr. Doug Stull, of OrthoKansas, said patients should consider a number of factors before picking an orthopedic surgeon. These include: qualifications, location and personal medical needs.

Stull said to seek referrals from friends and family.

He also said it is important to select a surgeon before you actually need one.

Doctors and staff will unveil the center’s new logo and name — it formerly was Lawrence Orthopaedic Surgery.

Tours also will be given of the building where a new rehabilitation area — which includes a swimming pool, sauna and sports court — has been added. The clinic also has a new Magnetic Resonance Imaging machine.

The event is open to the public and refreshments will be served.

As the population ages, the need for doctors who can take care of aching bones and joints is rising.

Nationally, the number of hip replacements is expected to grow 174 percent to 572,000 surgeries per year by 2030, according to a 2007 article published in the Journal of Bone and Joint Surgery. Knee replacements are projected to increase 673 percent to 3.4 million per year.

Projections show that by 2011, more than 50 percent of patients requiring hip replacements will be under age 65; the knee-replacement patient population will reach that threshold by 2016.

The fastest-growing group of patients who need knee replacements are between the ages of 45 and 54; the number of procedures performed in that age group is projected to grow from 59,000 to 994,000 by 2030.

These trends don’t surprise doctors at OrthoKansas, formerly called Lawrence Orthopaedic Surgery. They have seen a 22 percent increase in patients between 2000 and 2008, when they served about 25,300 patients.

Dr. Richard Wendt, who does hip and knee replacements, estimates the number of joint replacements has tripled in the past decade at OrthoKansas.

“It may be due to the aging population, but also people just realized the results are good and they can actually come in and do something that will keep them moving and going for longer periods of time,” he said.

To meet the growing need, the practice has expanded its space and services.

During the past year, OrthoKansas has doubled in size, now taking up 23,000 square feet of space. The recent expansion includes a rehabilitation area, which includes a heated swimming pool, sauna and sport court. It also added its own Magnetic Resonance Imaging machine.

Wendt, who joined the practice in 1988, said the expansion offers one-stop shopping for patients and possibly a better outcome. For example, he said, if a patient who had knee replacement surgery is going through physical therapy and has a problem, doctors are nearby to take a look.

“We felt we were more efficient by having all of these in one spot,” he said. “Also, we can kind of dictate how they are run and what is done to our patients.”

There are currently between 65 and 80 patients using the rehabilitation area per day, which employs three physical therapists and two occupational therapists.

Doctors hope the addition not only attracts patients, but fellow orthopedic doctors as well. They are looking for an orthopedist who specializes in foot and ankle injuries and another one who can take care of spine issues. They have been trying to recruit a spine specialist for more than two years.

“When we are recruiting — trying to get other doctors in — it’s kind of like expanding Allen Fieldhouse,” said Dr. Neal Lintecum, who specializes in hand surgeries. “We need the best facilities to recruit the best people and so that’s what we are trying to do. It’s similar to coach (Bill) Self recruiting against other people around the country. It’s the same thing recruiting doctors.”

Lintecum, who joined OrthoKansas in 1998, said the physicians were pleased when Stull joined the practice two years ago, particularly because he had no ties to Lawrence.

“It was a real coup because he is well-trained and a great surgeon, so we were very happy to get him to come here and happy that he stayed and became a partner,” Lintecum said.

Stull, 41, said the decision involved his career — and his family. His wife is a sculptor, so living in a viable arts community was important.

Second, he wanted to join a practice where he could develop his subspecialty.

“It has been challenging for me to get my shoulders-and-elbow practice going, but it’s happening and I am encouraged,” he said of seeing more difficult cases and attracting patients from other parts of the state.

“I really believe and our group really believes that orthopedics in Lawrence, Kansas, is at a crossroads. We can either choose to treat the community and be good community orthopedic surgeons or we can be that and a whole lot more,” Stull said.

In order to do more, the practice changed its name to OrthoKansas to reflect a desire to recruit patients from outside the area. It also is collaborating with the Lawrence Surgery Center and Lawrence Memorial Hospital to market Lawrence as the orthopedic specialty center of Kansas.

“All three entities are involved with providing orthopedic care to the patients, so we are trying to coordinate and make that a progressive, positive partnership,” Lintecum said.

The group’s first effort is providing a toll-free hot line for physicians across the state who have questions about upper extremity injuries. The goal is to draw attention to the specialties of Stull and Lintecum. There are 192 board-certified orthopedic surgeons in Kansas, but only 17 are certified in hand surgery. Stull is the only board-certified surgeon in shoulders and elbows.

LMH and the Lawrence Surgery Center benefit when a patient elects to have a procedure done by a Lawrence surgeon.

In 2008, physicians performed 794 surgeries at LMH involving orthopedics — including 58 total hip replacements and 188 total knee replacements. The hospital’s net revenue for the surgeries alone was $7.1 million. This does not include revenues from care such as rehabilitation, hospitalists and lab work.

The Lawrence Surgery Center, which is 50 percent owned by LMH and 50 percent by surgeon investors, had net revenue of $3.2 million in 2008 from 1,689 orthopedic procedures.

“It didn’t take long as a hospital administrator to learn the importance of strong physician practices, and that’s really where admissions come from,” Lawrence Memorial Hospital CEO Gene Meyer said.

“I admit very few patients. In fact, I haven’t admitted anybody in 12 years,” he said with a chuckle. “We really play off the strength of our medical staff and certainly orthopedics is right up there.”

All seven of the OrthoKansas doctors are board-certified and six are fellows of the American Academy of Orthopaedic Surgeons. Their experience in the practice ranges from two years to 35 years. The doctors also help take care of athletes at Kansas University and area high schools.

Despite their credentials, the doctors said they are losing Douglas County patients to Topeka and Kansas City doctors.

While Stull wouldn’t provide numbers, he said, “I can tell you we are losing a lot and I don’t know why it is happening.”

Meyer said he thinks it’s the lack of availability. For example, there is only one hand specialist and if someone needs surgery and that doctor is on vacation, the patient likely will seek care elsewhere.

Meyer also thinks there are doctors who refer patients out of town.

“There have been some referral patterns over time that have been created that actually refer people to surgeons other than the Lawrence surgeons,” Meyer said.

For Lawrence real estate developer John McGrew, it was about experience, personality and the latest technology.

McGrew had a right hip replacement done a year ago in Topeka. He did a lot of research online and interviewed several doctors, including a surgeon at OrthoKansas, before making a decision.

“I would have been very happy with the orthopedic surgeons in Lawrence, but none of them — at least at that time — were doing the larger ball, larger socket, which allows for a larger range of motion,” McGrew, 70, said. “I obviously would have preferred to do it here in Lawrence.”

A Lawrence friend recommended Dr. Joseph Mumford in Topeka after having a double hip replacement.

McGrew said he was impressed with the facilities and Mumford’s bedside manner.

“He will answer any of your questions and if you have an appointment with him, he will give you all of the time in the world,” McGrew said. “I think the psychological aspect of the operation is pretty important too, and you want to have a lot of faith in your surgeon and you want to believe he is going to do the best for you and cares.”

McGrew, who plays tennis, has no regrets.

Meanwhile, Kenneth and Barbara Bishop, a Lawrence couple in their mid-70s, both opted to have their operations done by OrthoKansas surgeons.

“We were so impressed with reports from other people who had used these specific doctors and their good results and the fact that the hospital is just really gaining in its reputation that we thought, ‘Why go out of town?'” Barbara Bishop said.

Two months ago, Stull performed rotator cuff surgery on Barbara and now she has physical therapy three times a week at OrthoKansas.

“So far, so good,” Barbara Bishop said. “We’ve been on the back porch a lot and enjoying the weather.”

But, Lintecum believes most patients don’t do their research.

“My analogy is that I think a lot more people spend time looking at Consumer Reports and so forth when they buy a $200 dishwasher than they will when they pick a doctor to do their surgery,” he said. “I would encourage people to make informed choices.”