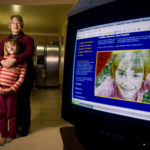 Seven-year-old Andrea Grimes is this month’s featured story on the Children’s Mercy Hospital Web site millionreasons.org. Andrea, who is pictured at her home with her mother, Sheila Warren, received treatment from Children’s Mercy for an enlarged heart muscle shortly after being born. Warren submitted her daughter’s story to the Web site, which shares and promotes many success stories of children and families who have gone through the hospital.

The Internet is changing the way people communicate about health.

At the click of a button, family members, friends and even acquaintances can get an update on how someone is recovering after surgery. No longer does mom have to make a dozen telephone calls to close loved ones while others are often left wondering.

Another click and someone can join a support group dealing with their health condition. The days of meeting in a library room with 10 others are going by the wayside. Online support groups have thousands of members from all over the world.

With social networking sites such as Facebook, MySpace and Twitter, people have numerous outlets when it comes to talking about health.

It recently launched a “Million Reasons Mosaic” as part of a marketing campaign. The mosiac features stories about people who have received care at the hospital.

“It tapped into what’s going on with social media and how families and young parents are communicating with each other right now,” said Shawn Arni, director of marketing and public relations. “There are a lot of families out there that have great stories to tell.”

In just three weeks, 130 stories have been posted at millionreasons.org. The site has had more than 14,000 visitors from 52 countries.

Arni said using parent testimonials is nothing new in marketing, but letting parents share their own, unedited stories and photos is unusual.

The stories run the gamut.

There is one about a 13-year-old who almost lost his life in a dirt bike accident. Another features a 3-year-old who was just diagnosed with cystic fibrosis.

“Crazy from the Beginning” is the feature story of the month and it is about a 7-year-old girl from Lawrence. Andrea Grimes doesn’t remember her weeklong stay for an enlarged heart muscle, but her mother won’t soon forget it.

“She had feeding tubes up her nose, IVs in her head and her feet, and I was terrified to touch her,” Sheila Warren wrote.

Today, Andrea is full of spunk and energy. Warren said it’s hard for co-workers to believe her daughter’s story.

“They have all met my kid and you would never know. She doesn’t have any obvious signs that anything was ever wrong with her.”

That’s one reason Warren decided to send in the story.

It was cathartic for Warren to tell Andrea’s story.

Lawrence resident Debra Thompson found such an outlet through CaringBridge, a nonprofit Web service that connects people during a critical illness, treatment or recovery.

She started a journal for her 24-year-old son, Drew Kie, who was diagnosed with acute myelogenous leukemia in December after suffering from a swollen calf and foot. He received treatment in the University of New Mexico Hospital with mom by his side.

“For me, it felt really good to write it all down,” Thompson said. “As a mom, it is really hard on you. You have to be strong for your child.

“By writing it, I could write in the evenings when I would leave him and I could cry by myself and write it all out and it was very therapeutic to be able to write it down.”

It also helped keep family and friends informed about Kie’s condition. Thompson said they have immediate family across the country — from Hawaii to Florida to New York.

“It seemed like all of my time for the first week was texting one person back and then texting another person back and you can’t put everything on there that you want to,” she said. “This was perfect because I could write down everything he did for the day — kind of like a diary but try to make it fun and interesting.”

The CaringBridge site also helped her son with recovery but he could read the outpouring of support. So far, about 160 people have posted a message and 1,500 people have visited his journal.

“It has been wonderful,” Thompson said. “It really did exceed my expectations.”

Kie is in remission.

“He hasn’t had one sick day — knock on wood,” she said. “If anybody, God forbid, has to go through this, I really encourage them to use it.”

So far, 150,000 families have created a journal on CaringBridge, which was founded in 2007. About 150 new journals are created daily. These journals are getting more than a half-billion visits.

With a background in Web product management, Manny Hernandez, of Berkeley, Calif., decided to take the social networking concept of Facebook and apply it to diabetes.

In March 2007, he founded TuDiabetes and its Spanish-speaking version EsTuDiabetes.

Hernandez was diagnosed with Type 1 diabetes in 2002 and started using an insulin pump in 2005. He joined an insulin support group the following year.

“That was the first time that I was surrounded at the same time by so many people that were in a very, very similar situation to mine in terms of health.

“That was a very eye-opening experience because in the first hour of the meeting I learned probably more than I had in the year that I was using the insulin pump.”

TuDiabetes has 8,000 members and the Web site gets more than 100,000 unique visits every month.

“A very reoccurring theme is that people are feeling relieved to finally connect with people that get them,” Hernandez said.

He said the Web site also has helped empower those suffering from diabetes. Often, members talk about blood glucose monitoring and what’s available to do that.

Hernandez said he was diagnosed with Latent Autoimmune Diabetes in Adults or LADA — a type that is not widely known. When he sees someone comment on the Web sites that they are a Type 2 patient and are having trouble keeping their blood glucose levels in check despite following a strict diet, he will advise them to ask their doctor about being tested for LADA.

“A lot of times they will come back and say, ‘You were right,'” he said. “That’s a great example of where there’s an empowerment happening at the patient level.”

Sarah Pressman, an assistant professor in Kansas University’s psychology department, said not much data exists on how these social networks are affecting people’s health.

She thinks they can be beneficial when it comes to connecting with friends and family.

“It really gives you a feeling of closeness that if you live on the other side of the country, you wouldn’t have otherwise,” she said.

In general, “having this larger social network — even if they are not seeing these people — is going to probably make them feel better, happier and less depressed,” she said.

Pressman said such social networks are good as long as they don’t destroy real-life relationships.

Meanwhile, she advises people to avoid disease-related Web sites if they are not sick.

“If you are healthy and you are spending a lot of time on these health Web sites, you could imagine that you might be learning information about diseases that you do not have or that you think you might have, where it’s going to cause you to ruminate and worry about things that are, sort of, outside of your control,” she said.

“We found that people who use these things a lot actually tend to get depressed over time.”