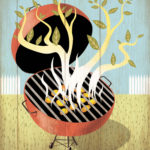 You can simplify your decision-making process about the grill you should use, the foods to cook and the ''green'' way to serve them. (Mark Hoffer/Fort Worth Star-Telegram/MCT)

If you’ve been having “responsible citizen of the world” thoughts about greening up your summer grilling and leaving less of a carbon footprint wherever you picnic, Diane MacEachern and Rick Browne can get you off to a good start.

“It’s not always easy to make the right choices,” concedes MacEachern, author of “Big Green Purse: Use Your Spending Power to Create a Cleaner, Greener World” (The Penguin Group, $17.95).

And sometimes, the old-fashioned ways are the best ways — like using soap, water and elbow grease for grill cleanups, rather than harsh chemicals, reports Browne, a nationally known grilling expert and author of “The Best Barbecue on Earth” (Ten Speed Press, $22.95).

Browne, also executive producer of the PBS series “Barbecue America,” visited 25 countries on six continents doing research for his book and claims he’s making up for resources he used in his travels by promoting green grilling.

With the authors’ advice, you can simplify your decision-making process about the grill you should use, the foods to cook and the “green” way to serve them.

“Whenever you’re making lifestyle changes, you have to remember there is a hierarchy of choices. It’s up to you to select the best options, based on what is available to you. And one of the biggest obstacles to making those choices is becoming very confused because you’re searching for the ‘perfect’ choice,” says MacEachern.

“There really is no ‘perfect’ choice, not even for me,” she says. MacEachern, who also wrote “Save Our Planet: 750 Everyday Ways You Can Help Clean Up the Earth,” launched the Web site biggreenpurse.com in early 2007. She says she believes the fastest, most effective way to protect the planet is to mobilize the most powerful consumer force in the world — women. She uses her books and Web site to train women to use their purse-power to buy less, buy green or do both.

But will all the time spent making “green decisions” for your picnic be worth it and make a difference in the world?

“Self-interest should be your motivation,” says MacEachern. “Everything we do to the environment we do to ourselves first. That’s particularly true when it comes to the foods we eat and the way we cook them.”

Probably the cleanest and greenest option for outdoor cooking is a solar stove, she says, but it’s much slower than regular grills and doesn’t impart the kind of “grilled” flavor backyard cooks covet.

Browne adds, “You really can’t use a solar oven to cook big pieces of meat like an 8-pound roast, either.”

Based on MacEachern’s research, she says the best grill is one fueled by natural gas — because it is clean-burning and doesn’t require repeated trips to stores to renew your supply. All that’s needed is a onetime hookup to a gas line.

The next-best choice, she notes, is an electric grill — provided it’s powered by electricity generated by wind energy. She adds, however, “There are roughly just 600 utilities that allow consumers access to electricity that is wind-generated. The rest use coal-fired or nuclear-power plants to make electricity.”

That’s why she usually winds up recommending propane grills as the best choice for backyard chefs who do not have access to a natural gas line.

“Propane is the right choice for most people because it still burns cleaner than charcoal,” she says. In her new book, she adds: “Charcoal emits more carbon monoxide, particulate matter and soot than any of the other fuels. That means it also contributes more to ground-level ozone, or smog.”

For backyard chefs determined to continue using charcoal grills (about 37 percent of outdoor cooks, vs. the 68 percent using gas grills and 1 percent cooking on electric grills), she and Browne offer suggestions to reduce the “damage.”

Use lump charcoal, preferably made from invasive tree species or from trees raised in sustainably managed forests. Some brands are certified by the Rainforest Alliance’s SmartWood Program. Hardwood lump charcoal made from wood scraps leftover from making flooring, furniture or houses also is a good choice, MacEachern says.

Neither author recommends using pre-formed, compressed briquettes — particularly the easy-lighting types that contain petrochemicals or those that use coal dust or other additives as “binders.”

Even more important than your charcoal choice is avoiding the use of charcoal lighter fluid, according to Browne and MacEachern. It’s the worst part of grilling with charcoal, says Browne who adds, “It’s loaded with petrochemicals that produce volatile organic compounds.”

Using a chimney-style charcoal starter, which costs about $15 and is widely available in discount, hardware and building supply stores selling grilling equipment, is a much smarter choice than using charcoal lighter fluid, they say.

Once the basic decisions are made about what kind of grill to use, it’s just as important to give equal time and thought to the foods you cook on the grill, says MacEachern.

“There’s no point in focusing on safe grilling if you’re going to cook foods raised with pesticides, antibiotics and hormones,” she says.

Both Browne and MacEachern encourage backyard cooks to start grilling more fruits and vegetables and less meat. All of the produce and meats should be locally produced, whenever possible.

MacEachern who lives in the suburban Washington, D.C., area, grills family meals two to three times a week during the summer. During a phone interview, she reveals, “Whenever I’m preparing meats for the grill, I shop for lean cuts and trim off visible fat.”

In her book, she explains, “Grilling or broiling meats at very high temperatures can form carcinogenic hydrocarbons if fat from the meat, fish or poultry drips onto hot coals and then shoots back onto your food.”

The American Institute for Cancer Research explains it this way: Preventing dripping fat from causing flare-ups is important because the flare-ups deposit carcinogens (both heterocyclic amines or HCAs and polycyclic aromatic hydrocarbons or PAHs) on the meat.

Browne also suggests an alternative grilling style to reduce some of the risks and flare-ups “the low and slow” method of cooking meats at lower temperatures for longer times.

• Focus on grilling more fruits and vegetables to replace the meat you’ve been eating because preparing them on the grill does not produce any dangerous hydrocarbons.

• When preparing meat on the grill, use smaller cuts like meat for kabobs and also limit your portion size.

• Spread aluminum foil on the grill surface and poke small holes in it to allow the fat to drain.

• Marinate the meat, even for a short time, because research suggests that it can significantly reduce the formation of herterocyclic amines.