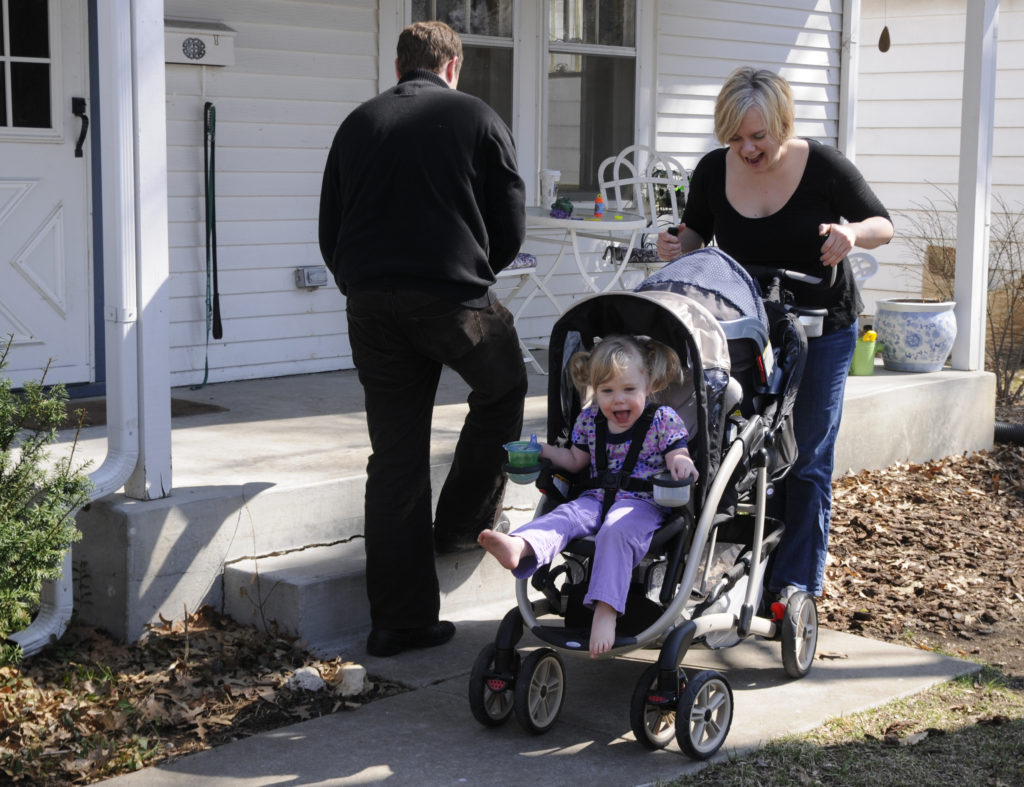 Babel Piepergerdes, 2, delights in the opportunity for a stroller ride, pushed by her mother, Samantha Mee. The family recently purchased a two-seated stroller to include their newest family member, 5-month-old Jasper, seated behind Babel. At left is their father, Brent Piepergerdes.

Samantha Mee admits she might have overthought it. She recently purchased a stroller for her two children, 2-year-old Babel Piepergerdes and 4-month-old Jasper Piepergerdes.

“I’m kind of a nerd about researching things,” Mee admits. “I searched for stroller reviews online and started reading them. There are tons and tons of twin strollers out there, for two kids who are the same age. I wanted one that was convertible, that could hold a Graco car seat, and that could eventually hold a bigger kid.”

“I love our new stroller,” Mee says. “Jasper’s car sear faces me, so I can see him. Babel can look out from the front, so she’s entertained. The way it maneuvers around, it doesn’t feel bulky. It’s just so easy to pack it up and throw it in the car. It’s a little heavy, but what do you expect from a double stroller?”

Juggling a baby or young child while on the go can be stressful at the best of times, but it’s even more of a challenge when your stroller won’t cooperate.

The goal: Find the perfect baby stroller to cart your kiddo around town without tearing your hair out.

Elizabeth Ross, store manager at The Blue Dandelion, a children’s boutique at 841 Mass., has some answers.

As mother of a 4-year old boy (who still fits in strollers), she’s done her homework. One of the “Cadillac models” of stroller in the Blue Dandelion is City Elite by Baby Jogger, retailing for $449.

“The cool thing is the one-hand folding up of this stroller, with just a tug of the strap,” Ross says.

A big trend right now for moms is jogging with the baby, and the City Elite is an all-purpose stroller.

“There’s a nice big sunshade to cover most of the baby,” Ross says. “You can take this stroller anywhere — shopping, jogging and on hikes.”

The Blue Dandelion’s most popular stroller is the McClaren Triumph, retailing at $175.

“It’s especially good for traveling on planes,” Ross explains. “It’s as collapsible as an umbrella stroller. There’s a nice carry strap, so you can carry it with you. This stroller is very popular in cities.”

Ross also recommends the Travel System-type strollers — strollers that adapt to car seats, so that a mom doesn’t have to jostle a sleeping baby around when taking him out of the car and placing him or her in the stroller.

Another popular model at Gary Gribble’s Running Sports, 839 Mass., is the Beast of Burden Revolution, known as the BOB, which retails for $389 for a single and $569 for a dual.

“One stroller lasts the whole infancy and childhood of your kid,” salesman Steve Sells says. “A big selling point for the BOB is its bigger tires, for more traction. You can push it all the way up the levee.”

“Our most popular style is the BOB Stroller Strides, a true fitness stroller,” he says. “It even comes with an additional fitness program.”

Wendy Conover of Baldwin City, mother of 5-year-old Ella and 2-year-old George, says a stroller was a “very important purchase for me since I walk a lot.”

“After I had my second child, I got a double-jogging stroller, which I love and still use,” she says of her BeBeLove model. “Even though my kids are 2 and 5, they still fit in there, and actually using it really adds to my workout, since they’re a significant amount of weight to push. They also say, ‘Go fast, mom! Faster!'”

“You really get what you pay for,” he says. “If you put a lot of money into the product and use it diligently, it’ll hold up really well and offer a lot of value.”