Beans the cat safely back, after accidental trip to California 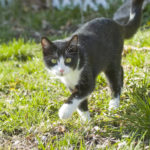 Beanies Ann is back home this week after a short trip to San Diego after she crawled into a neighbors moving van.

Most pets normally don’t go on the family vacation. But one Lawrence cat just needed some sun, and headed west while the rest of the family headed east during spring break.

When Anita and Ian Sotomayor and their four children, ages 3 to 12, left for a trip to St. Louis recently, Beans was on her way to San Diego.

“We came back on Sunday, and she was nowhere,” Anita Sotomayor said. “We called and called all evening long until the kids went to bed and just tried to reassure them that she would come back tomorrow.”

But when they woke up the next morning, Beans was still missing. The family moved to action and posted fliers about their missing cat throughout the neighborhood.

But Anita Sotomayor didn’t see the cat, so the neighbor clarified, “My wife has the cat in San Diego.”

Beans apparently climbed aboard a truck the neighbors were packing up for a move to California. When the truck was opened in California, there was Beans.

The cat stayed with the neighbor’s wife for a week and a half before joining her on a Continental flight to return home on Thursday.

“(The children) were so excited, and we had been looking forward to that day,” Anita said. “We just love Beanies. We think she’s so lovable.

Anita’s 9-year-old son Jules said he thinks Beans may have even brought back some California sunshine. He said, “The day has been nicer because it’s been rainy a lot when she’s been gone.”