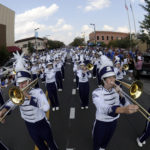 Massachusetts Street on Saturday was a sea of crimson and blue and black and gold and green and yellow and orange.

Kansas University’s Marching Jayhawks led more than 3,000 musicians and performers in the 61st annual Band Day festivities, which included a parade downtown to be followed by a halftime performance during KU’s game against Sam Houston State.

Buoyed in part by successful sports seasons last year, the Marching Jayhawks have seen a rise in membership from 177 last year to 252 this year.

Cassie Merryfield, a KU junior who plays the flute for the Marching Jayhawks, said the football team’s Orange Bowl win and the basketball team’s national title, coupled with a recruitment push, helped to attract more students.

“I think the success of last year really helps us out,” she said. “A lot of kids were really interested and they want to go to bowl games this year.”

“It’s always cool to be part of something where there’s lots of people coming together for one thing and one purpose,” said Shannon Roberts, a senior at Baldwin High School who participated Saturday. “It’s just incredible to be in there with thousands of kids around you. You can just feel the synergism.”

As Kirk Yager, a Lawrence High School junior and section leader in the marching band, waited for the start of Saturday’s parade, he said he enjoying getting everyone pumped up for the performance.