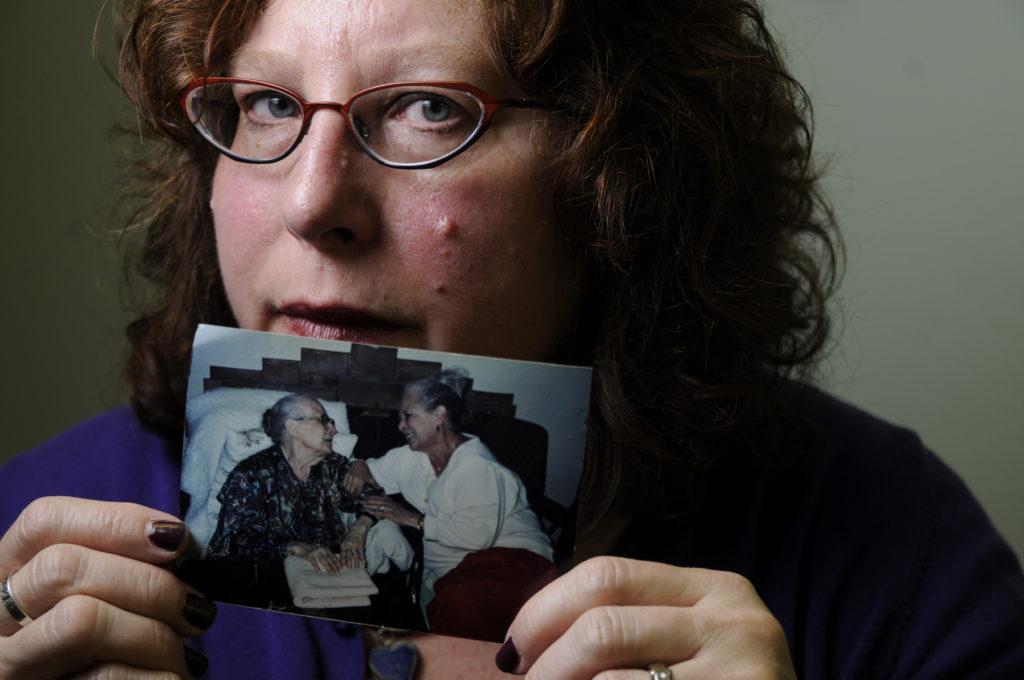 Marcia Epstein lost her mother, Abba Howell, to suicide five years ago. Epstein, the executive director of Headquarters Counseling Center, 211 E. Eighth St., displayed a photo of her mother, at right, on Thursday.

Marcia Epstein was the good daughter.

She always had been. Growing up, she watched out for her brothers as they moved from place to place – California, Texas, Kansas City – as her divorced mother and alcoholic stepfather battled life.

Decades later, she still did what good daughters do – she always called her mother before she traveled. This particular week there was an added reason to do so. Epstein’s birthday was approaching, and she wouldn’t be home to celebrate it with her mother.

As the director of Lawrence’s Headquarters Counseling Center, Epstein was spending the week in Santa Fe, N.M., at a National Suicide Prevention conference.

On her actual birthday – her 48th – there was a voicemail waiting for Epstein on the hotel phone. It was from her husband, asking her to call home.

“I could tell from the tone of his voice that it wasn’t to wish me happy birthday,” Epstein said.

It was 1975 in Lawrence when Epstein – a self-described lackadaisical Kansas University student – first walked into the offices of Headquarters Counseling Center.

“It was a very casual, hippie environment, which really wasn’t me,” Epstein said. “But the people were very nice.”

She remembers the first case that she went out on a short time later. An elderly woman in the Oread Neighborhood was feeling depressed. She needed someone to talk to. Epstein and a trained staff member went to the home. Jar lids were on the floor, and the woman wanted Epstein to check in the home’s attic.

“I remember hearing strange noises behind me,” Epstein said. “That’s when I realized there were mice. She was feeding mice out of the jar lids.”

Epstein didn’t check the attic, but she stayed with Headquarters.

“We talked to the lady and she felt better,” Epstein said.

Since 1979 – when she asked to be on the hiring committee to select the center’s next director but instead was told to apply for the job – Epstein has been the public face of suicide prevention in Douglas County.

This past week, it’s been a face that has been a little bit of everywhere. It was National Suicide Prevention Week, and Epstein was busy with public events – proclamation readings, library gatherings, speaking engagements. But it was a Sunday morning moment at home that likely will stick out above any public event of the last week. On Sept. 7, Epstein picked up the Journal-World and read about a life that was ended in a Lawrence parking lot via a self-inflicted gunshot wound.

Epstein’s morning began with the emotion that the director of Headquarters Counseling most often fights.

“I just felt so sad,” Epstein said. “When I think about suicide, what I think about is the sadness that this person thought there was no other choice.”

There are victories, of course – hearing the panic ease from a caller’s voice, making a call-back to a client and they pick up the phone.

But it can be tough to appreciate the triumphs. The suicide rate in Douglas County is higher than the national average. In 2007 there were 17, and this year there have been at least six. The national annual average for a county this size is 11 deaths by suicide. But even if Douglas County were to reach that level, it would be hard to take comfort in “just” 11 deaths.

Maybe that is why during its first 10 years of existence, Headquarters had five different executive directors. In its last 29, it has had just one.

“I wish there were more people who would do more to make a difference, but I’m not willing to just step away and see what happens,” Epstein said. “There’s just so much need.”

A futon sits in the corner of the center office at the Headquarters Counseling Center, 211 E. Eighth St. It is not just there for decoration. It is piled with pillows and blankets. Elsewhere in the office, quilts hang over chairbacks, and there are all the signs that this is a place where employees and volunteers hunker down.

“We literally never close for a minute,” Epstein said.

The center operates a 24-hour phone line – 841-2345 – that people can call at any time if they need to talk. The phone line receives about 50 calls a day. The center is on pace to make about 19,000 contacts with individuals this year. That’s up from about 14,000 two years ago. Epstein is not sure why the numbers have increased, but she said the national economy, the war in Iraq and all the other traditional problems that weigh on people have many Douglas County residents in crisis.

“Every day we get the kinds of calls that are so intense that we know the person on the other end of the line could die this day,” Epstein said.

Epstein – although she’s the center’s top administrator – said she personally provides counseling services on a daily basis. The center – with a budget of about $200,000 – has four full-time staff members, two part-time employees and about 30 volunteer counselors who must undergo about 100 hours of training.

It is in the little room with the futon and a big black phone that the frontline battles of depression and despair are fought. The phone rings, and oftentimes the stakes are high.

“The call may start off where the person is 95 percent sure that they’re going to kill themselves,” Epstein said. “But you have to remember that there’s a little bit of hope there because they called. Our job is to ratchet up that hope.”

And to talk. Epstein’s perpetual message is that there’s always help available, always someone ready to listen.

“We always have time to talk because I know you can sometimes make a huge difference just by spending 35 minutes on the phone with someone,” Epstein said.

Epstein’s efforts are generally praised by community leaders. Will Katz has spent the last year getting to know Epstein as a new member of the board of directors for Headquarters.

“Her job is a complete burnout position,” Katz said. “Everybody knows people who got out of college and worked a job like that for two or three years and said ‘I just can’t face it anymore.’

“I think what Marcia can really do is stay in the ‘now.’ A lot of times when people freak out, they’re remembering some painful experience or thinking about some future consequence. She really does a great job of focusing on the now. I would think you’d have to do that to keep going in that job.”

It was five years ago that Epstein walked into that Santa Fe hotel room. On the phone message, her husband didn’t at all sound like himself.

Perhaps deep down Epstein knew the call concerned her mother. Abba Howell was a first-generation American, the daughter of Russian parents who came to America knowing no English but full of desire. Her father worked his way up from a shop clerk to become a Kansas City banker. But Epstein’s mother never reached the top rung of life’s ladder.

“She always struggled with her own sense that she lacked self-worth,” Epstein said. “She thought she was never good enough for her father. She made a lot of bad choices.”

When Epstein called home, her husband delivered the news.

Her mother was dead from a prescription drug overdose. Epstein doesn’t doubt it was intentional. Her mother had talked of suicide before and was in counseling.

Suddenly, after more than two decades of helping others deal with the grief of suicide, Epstein was dealing with it personally. And she learned she was a lot like everyone else.

She remembers breaking down while on the phone with the airline company trying to arrange a flight back to Kansas City. “I just handed the phone to my friend and said, ‘You have to get me home.'”

She remembers the guilt, the meetings with her brothers where they all wished they would have put their busy lives on hold for a moment to spend more time with their mother.

And she remembers the questions. Would this have happened if she had been in town that day?

All part of the process. Lessons long taught and now learned, including the cruelest of them all.

“There is nothing,” Epstein said, “that is an absolute protection from this.”