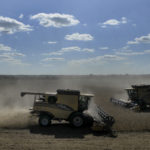 Combines pass each other during soybean harvest in early October on the Pine Family Farm property north of Lawrence. Soybean prices have plummeted recently, leading to tough times for farmers.

The yield from fall harvest has been strong for area farmers. Unfortunately, like the stock market, prices paid for grain have crashed.

And soybean prices are worse. Four months ago, soybeans were selling at $16 a bushel. Today, the price is $8.58. And when the fall crops were planted, the cost of fertilizer and fuel were at all-time highs.

It’s tough on the farm.

“But what are you going to do, stay awake at night?” said Mike Craig, who farms 1,500 acres of soybeans, corn and wheat in the Vinland area south of Lawrence. “Unfortunately, you have to deal with it and hopefully next year will be better.

“Wheat has taken a tailspin, too,” said Craig. “We sold a little soybeans on the futures market, but not enough. Some guys will tell you to sell the corn now and the soybeans next year. It’s a tough game to play. You’ve got to have a good attitude. Most people do.”

Farmers are used to weather problems, and sour economics aren’t uncommon, but this year has been different. Very different.

“A lot of the price wasn’t just farming, it was economic fear,” said Steve Wilson, owner of Baldwin Feed Co., whose elevator takes in most of the grain around the area. “A lot of other factors played into it, not just farming.

“The stock market tumbled and fear in the economy knocked the grain prices down when it shouldn’t have.”

Mother Nature generally was kind this year. Most of the corn and soybeans are cut around Douglas County and the numbers are good.

“I think we’re about 75 to 85 percent done with the corn and maybe not so much with the soybeans because they were planted late and were green. I’d say 70 to 75 percent with them,” said Bill Wood, county extension agent.

“We’re going to have to wait awhile now,” said Wood.

He said the soybeans were averaging between 20 to 40 bushels an acre, which is near the 2002-2006 average of 32.6 bushels. The average for corn is 97 bushels an acre during the same time frame and this year’s crop is doing better.

“I’m hearing from 100 to 150 (bushels) on corn,” said Wood. “Most of the people I’ve talked to are satisfied on that. So our corn is doing better than average for the most part, but some fields are under.”

He hasn’t talked to Craig.

“I’d say we are average to below average. I’m not bragging on mine,” said Craig. “Everything was late. We knew we were losing bushels. I’m hearing other people are pleased.

“Seemed like this year we had to put insecticide down, which we don’t normally do,” he said. “It’s over for me, but next year will be better.”