Congestion a threat to rail system

Improvements are necessary to avert crisis 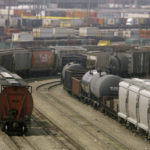 Sorted freight cars are seen on separate tracks as they await completion in April at the Belt Railway Co. of Chicago, one of the busiest rail yards in the country. Cars are switched from incoming trains to outgoing trains based on destinations. The strain of congestion is putting pressure on the nation's 140,000-mile network of rails, and it's likely going to get worse unless improvements are made.

Chicago ? Railway executive Matthew Rose stood before fellow industry leaders, pointing to a map meant to tell the future of the U.S. rail freight network. It was drenched in red – east to west, north to south.

The blotches illustrated areas where, by 2035, traffic jams could be so severe trains would grind to a halt for days with nowhere to go.

“For those of you who’ve ever seen a good rail meltdown, this is what it looks like,” Rose, CEO of Burlington Northern Santa Fe Corp., said as the crowded hall shifted uncomfortably in their chairs. “It’s literally chaos in the supply chain.”

While the nation’s attention is focused on air travel congestion and the high cost of fuel for highway driving, a crisis is developing under the radar for another form of transportation – the freight trains used to deliver many of the goods that keep the U.S. economy humming.

The nation’s 140,000-mile network of rails devoted to carrying everything from cars to grain by freight is already groaning under the strain of congestion, with trains forced to stand aside for hours because of one-track rail lines.

And it’s probably going to get worse over the next two decades, according to an analysis of government and industry projections by The Associated Press and interviews with experts on rail freight.

The damage to the U.S. economy could climb into the billions of dollars. Higher shipping costs would raise prices for everything from lumber to grain. One analyst said the rail crunch could add thousands of dollars to the price of a car.

“It’s not rocket science to see we have a calamity coming down the road,” said Paul Bingham, a transportation analyst at research firm Global Insight.

Congestion around the country has remained chronic, even as the ailing economy has led to a 3 percent dip in freight train traffic in the first few months of this year compared with last year. And a new U.S. Chamber of Commerce report warns demand for freight trains is expected to double over the next 25 years.

The problem is that there’s no room.

“Even if the estimates are half wrong, we can’t put even 25 percent more freight in the system right now without serious implications,” said Randy Mullett, an analyst for the nonprofit Transportation Research Board.

Already, delays hamper the existing rail freight network. A lone train stopped in Chicago can force other trains to stop or slow as far away as Los Angeles or Baltimore.

“It’s a ripple effect,” said Scott Haas, a vice president for United Parcel Service, which uses 3,000 freight cars every day, more than any other U.S. business. “Everything in my system backs up.”

Atlanta-based UPS hasn’t determined the total cost of freight route congestion, but says that just five minutes of daily delays for each of its drivers amounts to $100 million in company losses a year.

Other modes of transport can’t take up the slack: Trucking faces its own congestion problems, a shortage of drivers and high fuel prices. Ships and barges can’t reach large parts of the country. Airplanes couldn’t begin to carry the millions of tons of coal, waste, chemicals, grain and cars hauled by trains. And hauling freight by rail remains far more fuel-efficient than trucking.

Many politicians are joining rail executives in sounding the alarm.

Others suggest the railroads are being alarmist.

“It’s illogical to assume nothing will be done,” he said. “Railroads have an inherent interest in doing something. The market will respond. There’s no reason think they’re headed for the abyss.”

Amtrak, which shares the rails with freight trains, is also feeling the pinch. Its long-distance trains were on time just 42 percent of the time last year, according to a report by the U.S. Department of Transportation’s inspector general.

The problem on the shared tracks has worsened in recent years as freight traffic has soared. Passenger trains move much faster than most freight trains, and in many areas there is only a single track, forcing trains to pull over onto side tracks and wait while trains coming in the other direction pass.

The Chamber says expanding capacity on the more than 150-year-old U.S. rail system would cost $148 billion over 30 years. Private rail companies would have to pay most of it, with federal and state tax dollars covering much of the rest.

Any solution will have to include Chicago, which handles about 40 percent of all U.S. rail freight on 180,000 trains a year.

Expanding capacity here will cost $1.5 billion over six years, a coalition of officials and rail executives estimates. David Burns, an independent railroad engineering consultant based in the Chicago area, put the cost closer to $4 billion.

Bottlenecks crop up in other parts of the country, too.

And Baltimore’s long but low Howard Street rail tunnel, connecting mid-Atlantic states to the Midwest, has just one track and can’t accommodate freight-train cars used elsewhere that carry twice the load, with one container stacked on top of another.

But the big choke point is Chicago, where it can take up to two days for trains to wind through the city.

Nearly all the major routes of the weblike rail freight system comes through one or more of the nearly 80 rail yards here. It’s why a single delayed train here can force those thousands of miles away to stop or slow down.

The problem is that the Chicago hub was designed in the mid-1800s, when the area was a comparative backwater of 30,000 people. Now, 10 million residents sprawl into formerly rural areas where trains once rolled along unencumbered.

The 500 freight trains moving through Chicago each day also have to share tracks with – and yield to, according to protocol – 700 daily commuter trains. In contrast, commuter trains in New York City don’t share lines with freight.

Proposed solutions include building new overpasses to keep trains moving at track intersections. Elsewhere, single-line tracks could be expanded to double or triple. And some advocates want to restore tracks that fell out of use in the 20th century.

Jacksonville, Fla.-based CSX announced plans this month to spend $300 million on upgrades to allow trains with double-stacked freight cars to run from the East Coast to the Midwest.

That would mean raising clearance on bridges and tunnels on lines through the Appalachian Mountains. CSX would like the federal and state governments to kick in $400 million more.

While the move would help congestion, it’s not a cure-all. Double-stacked cars can’t carry heavy, densely packed commodities, like coal, wheat and liquid chemicals, because of weight limits on tracks and because the heavy loads would make the trains dangerously unstable.

Expanding capacity to route trains around clogged cities may not sit well with suburban and exurban towns.

And then there’s Amtrak. It already operates on tracks owned by the big railroads, which will be increasingly reluctant to make concessions to passenger trains.

But Amtrak spokesman Marc Magliari said it was only right that Amtrak also benefit from capacity upgrades. The service was formed in 1970 when Congress agreed to let railroads unload passenger service they said was dragging them down. In exchange, the railroads were required to give Amtrak priority on their tracks.

It may be impossible to keep both sides happy.

“There are areas, especially where there’s just a single track, where Amtrak takes as much as 30 percent out of the capacity of freight rail. That’s huge when you’re in a capacity crunch,” said Mullett, the analyst. “There will be hard public policy decisions, and that would include Amtrak.”