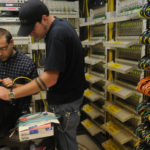 Where in the world is Matt Lauer?

When Sunflower makes its switch to digital signals early Monday, even subscribers without digital capabilities still will be able to tune in to 37 analog channels.

The traditional way isn’t going away.

“People can wake up and have their old TVs hooked up to their old cable service, and still be able to see the ‘Today’ show,” said Rod Kutemeier, Sunflower’s director of customer support and marketing. “Sunflower wants you to be able to still use your old TV.”

The reassurance comes as Sunflower – which provides service in Lawrence, Basehor, Tonganoxie, Eudora, Linwood, western Wyandotte County and other areas in northeastern Kansas – makes its multimillion-dollar digital transition, as requested by the Federal Communications Commission.

And while virtually all of Sunflower’s 33,000 customers – more than 90 percent, at last count – already are equipped to receive digital programming, company officials know some people won’t want to change.

So even though sticking with an old analog TV and going without a digital TV box will mean missing out on many existing and new Sunflower features, the company is making sure 37 channels will remain available simply by sticking your same old cable into the back of your same old TV.

In such situations – often for second and third TV sets in a customer’s home – Sunflower will take digital feeds and translate them back into analog. Among them will be all broadcast channels, including major network affiliates, plus Sunflower Broadband Channel 6, ESPN, Fox News, QVC, Disney, Food Network, The Weather Channel and others.

For customers already equipped for Sunflower’s digital transition, including those who received some of the 15,000 free digital boxes distributed by the company late last year, changes taking effect Monday will include an expansion of service.

The number of high-definition channels, for example, will increase to 61, from 32, Kutemeier said. And more will be on the way.

“Most of our customers already are in very good position,” said Knorr, who also is chief operating officer for The World Company, which owns Sunflower and the Journal-World. “This allows you to take advantage of all that the programmers are making available.”

That also means some programming will be changing channels. The switches will begin at 12:01 Monday morning, and likely continue through 6 a.m.

Many of the channel changes are being conducted to make things easier to find, Kutemeier said, especially as it relates to high-definition programming. Standard-definition channels will correspond with the last two digits of their high-definition versions, where available.

Some channels on the 200 level will be left open, Kutemeier said, to accommodate future channel additions in high-definition.