Pizzeria to remain closed unless owner pays back taxes 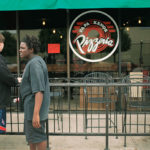 Passers-by read the Seized sign displayed Wednesday in the window of Papa Keno's, 1035 Mass. The sign read, This

Papa Keno’s Pizzeria is closed in downtown Lawrence and Overland Park, and its signature slices won’t be cooked to order anymore unless owner Greg Keenan can pay his taxes.

Agents from the Kansas Department of Revenue seized all cash, known bank accounts, business inventory and equipment from Keenan and his two restaurants Wednesday morning, seeking to cut into more than $170,000 in unpaid taxes and penalties.

The moves came after the department filed tax warrants seeking repayment for unpaid sales taxes and payroll-withholding taxes, plus interest and penalties. One of the warrants is from this year, and another goes back to 2005, when Keenan had owed $150,000 and had established a payment plan to satisfy the debt.

On Wednesday – with the 2005 warrant showing a debt of $84,000, but the combined total having reached up to $170,419.98 – the department took the next step: closing the shops, seizing their assets and making plans to sell items to cut the state’s losses.

“Warrant execution occurs only after all other collection attempts – including letters, calls and all other types of communication – have failed to resolve it,” said Dedra Platt, manager of civil tax enforcement. “Warrant execution and business seizure only occurs as a last resort. :

“Our goal is not to put them out of business. We go to extra effort to try and resolve it. We will continue to work with him – with any taxpayer.”

Keenan, reached Wednesday at his office, said that he was working to resolve his tax issues.

“We’re dealing with it,” Keenan said, a few hours after agents posted a “SEIZED” sign on the front door at 1035 Mass., downstairs from his office. “We just got it all settled.”

Keenan declined to discuss the situation further, saying he had to talk with his attorney.

“Everything will be fine,” he said.

Later in the afternoon, state agents sat at tables inside the pizzeria, eating to-go food from Dairy Queen. An unmarked van showed up, and a man got out and quickly changed the restaurant’s door locks. Others affiliated with the operation stood nearby in silence, awaiting instructions.

Platt said the assets were being seized with one goal: to be sold at auction, so the tax debt could be paid. Removal of tables, chairs, ovens and other equipment could begin as soon as Friday.

“As long as the taxpayer is working with the department, trying to resolve the debt, we never get to this type of action,” she said. “This is not a normal activity.”

Papa Keno’s started in 1990, when Keenan opened his first restaurant on East Ninth Street. It later moved to 1035 Mass., and he opened the downtown Overland Park location in 1995.

He later lived in Denver, where he opened two Papa Keno’s storefronts – one in 2001, and another in 2003. But he sold those in December 2003 and moved back to Lawrence to grapple with financial problems that he says were caused by one of his own employees.

In 2005, the state said the Lawrence store had been under-reporting sales beginning in 2002 and extending into 2004.

“Somebody was stealing in my office,” Keenan said at the time. “I chose not to press criminal charges, and I handled the matter internally.”

Keenan had said that he had made a $40,000 downpayment on the debt and had established a payment plan.

On Wednesday, Platt declined to discuss specifics of Keenan’s current tax debt, other than what had been included in the tax warrants themselves.