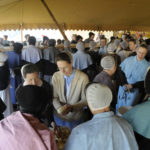 Charles Beeghley isn’t surprised by the number of cars driving slowly past his farm, south of Lawrence on North 650 Road.

Wooden buildings have recently cropped up in his field. On Thursday, giant tents went up.

“We’ve had a lot of inquiring and people driving by here the last couple of weeks,” Beeghley said. “Finally, their curiosity got the best of them and they turn around and come back and say, ‘What are you doing out here?'”

What he’s doing is allowing his farm to be home to the annual conference of the Old German Baptist Brethren. When thousands descend on the Beeghley farm Saturday, it will be the first time the conference has been in Douglas County since 1970, when it was across a few fields to the south of the Beeghley property.

Darrell Shuck, who along with Beeghley is one of the local congregation’s four ministers, estimated about 5,000 people may attend – many of them among the brethren’s 6,000 or so members. Most of the others attending will be family members, some of whom are not baptized and are not yet considered members of the church.

“It’s hard to really guess how many might be here,” Shuck said. “And I expect the gas situation, the prices, might make a difference in our attendance this year.”

The conference, which is conducted every year on Pentecost, the 50th day after Easter, begins at 10 a.m. Saturday with an opening worship service. Over the course of the event, there will be 10 more services, all of which are open to the public.

For the brethren, going to church means going to weekly meetings led in rotation by one of the multiple ministers the congregation has elected to serve a life term. The 6,000 or so members are spread among 56 congregations in the United States, including 65 members at the local Willow Springs Old German Baptist Brethren Church.

To become a member, a consenting individual must repent and be baptized by trine immersion, which means a person’s body is submerged in water three times in the name of the Holy Trinity. This gives them the nickname “the Dunkers.”

The brethren’s only creed is the New Testament, and members believe in the literal translation of the New Testament and apply those Scriptures to daily life. The group believes in a way of life that doesn’t engage in swearing, is nonresistant and does not conform to the world. They wear plain dress, bonnets or hats, and the men have beards. Modern influences such as television, radio, stereo and the Internet are not acceptable in their homes.

The conference location is picked two years in advance based on a rotation across the country from east to west and is held in areas that are concentrated with members of the faith. The conference also was held in Douglas County in 1909 and 1936 in the Willow Springs community.

With so many out-of-towners traveling to the area, logistics are carefully planned. Shuck said the Douglas County Sheriff’s Office will help with traffic control, and Beeghley says many neighbors and friends of the congregation are hosting visiting families.

“We’ve got a lot of good neighbors we appreciate, and have a good relationship with all of them,” Beeghley said.

After the close of the conference Tuesday, the tents and buildings will come down, and all the extra lumber, bedding, food and other goods will be sold as part of an auction the following Saturday.

And soon Beeghley’s field will be back to normal, with the next crop planted.