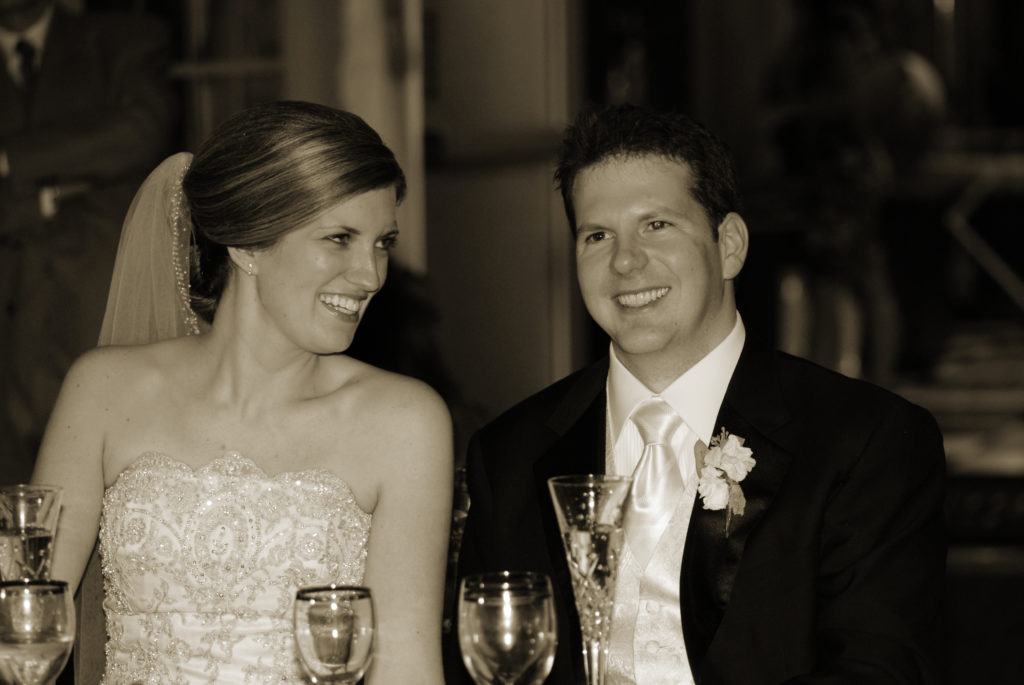 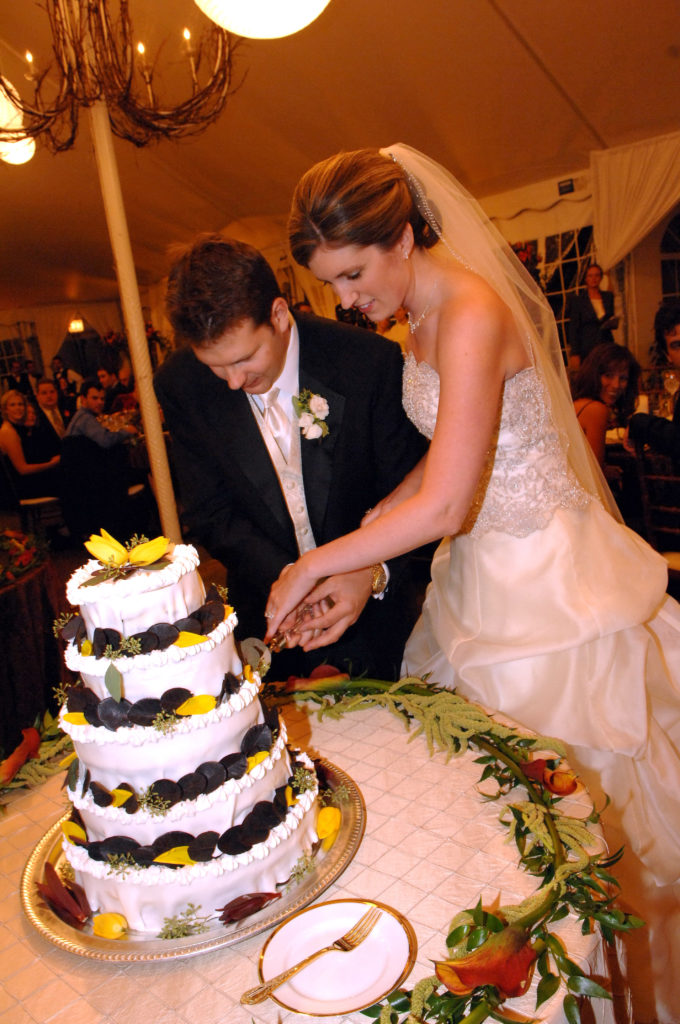 J.P. and Corey Marchetti cut her lemon-flavored wedding cake at their wedding reception catered by the contestants of Bravo's Top 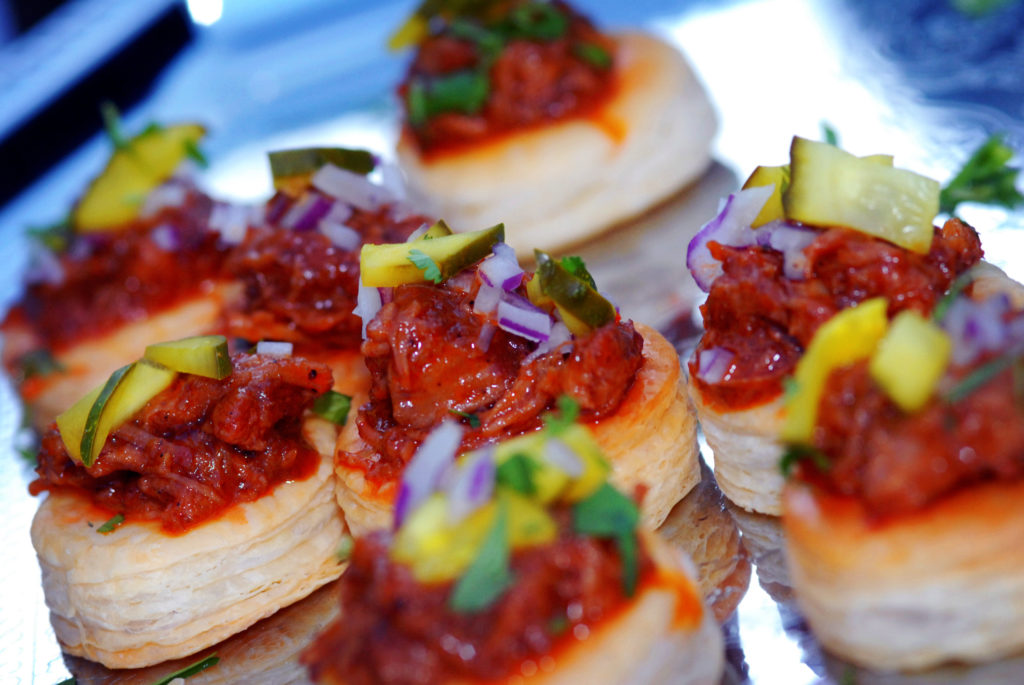 Pulled pork sandwiches were some of the comfort food on the bride's buffet.

Every bride wants her wedding to be her special day – a day to spend with friends, family and her new spouse.

For Lawrence native Corey (Smith) Marchetti, her October wedding included all of those things … plus 80 crew members, eight top chefs, four judges and about 2.3 million of her, um, closest friends.

Yes, the bride puckering up her face at her wedding cake in the show’s tension-filled promo is a 1999 graduate of Lawrence High School and a 2003 graduate of Kansas University.

“We’re glad that it’s finally here,'” she says of the episode. “It’s been like excruciating the past six months waiting for it to come on.”

So, how did the couple end up as special guests on such a hot reality show? It all comes down to a phone call from the show’s producers and a date, Oct. 21.

Producers were in Chicago filming this season’s series and were trying to find a venue for a “Wedding Wars”-themed episode. The producers were exploring the possibility of using Galleria Marchetti for the show, a prospect J.P. Marchetti, who runs the venue/restaurant, and his then-fiancee Corey, who does the marketing, found very exciting as “Top Chef” fans. J.P. Marchetti returned the producers’ message as fast as he could.

“Usually when people ask us about a date, they want the date to be open,” he says. “And I said, ‘Well, there’s nothing going on that day,’ so I was hoping you know, they’d move forward. And the guy told me, ‘Oh, that’s too bad.'”

The producers were looking for an existing wedding on that date so the chefs could take over the catering as a show challenge. Upset that despite holding 70 weddings per year they didn’t have the right date, the couple began discussing what they could do to make it work.

“And I was like, ‘Well, you know, we could get married.’ And we thought about it for a minute and we were like, ‘Yeah, we could get married,'” Corey Marchetti says. “So we called back and just kind of threw it out there, thinking maybe they’ll be interested, but probably not.”

Turns out they were interested and got the OK from the network.

But, of course, the couple couldn’t escape a reality show-type hitch … they had just 27 days to plan a wedding in Chicago that had been planned for April in Kansas. They already had everything set in Lawrence – a church, reception site, florist, photographer and cake.

“I could not describe to you how stressful the month leading up to the wedding was,” Corey Marchetti says. “Someone actually said to us that if they had gone through all the stuff we were going through before they got married, that they wouldn’t have gotten married.”

Going on with the show

First up on their to-do list? Making sure her family was OK with the switch. The bride’s father, Michael Smith, is unable to travel because of a severe brain injury. It was decided the bride’s mother, Marcia Smith, would walk her daughter down the aisle.

“She would not have done it if I couldn’t have been there,” Marcia Smith says.

With her parents’ blessing, the couple sent out a wave of invitations asking people to a wedding weeks away in a different state and, oh, yes, guests would have to sign a release form if they wanted to come.

“We weren’t supposed to tell people what it was for exactly,” Corey Marchetti says. “Per Bravo’s instructions, we had to include this special sheet that says, ‘This is being filmed for a reality show’ like in the invitation, which is kind of weird. So then we really had people calling and being like, ‘What are you guys doing?'”

In the end, the show – like the backup wedding dress the bride had to order because her original one wasn’t ready – turned out to be a perfect fit, too.

The couple says the food was as good as it looks on tonight’s episode, which features dueling bride and groom buffets. The Marchettis didn’t get into too many details, but they say that as part of the show’s weekly elimination challenge, the chefs were split into two teams of four and each team was responsible for everything from appetizers to the wedding/groom’s cakes on each side. Someone from what the judges deem the losing team will be voted off the show. However, the Marchettis say the judges should have a hard time as the food on both buffets was “unbelievable,” with the groom’s side full of Italian goodies and the bride’s a mix of down-home treats.

So, what better way to watch the big show than with food? Lindsey Hoover, the bride’s sister and matron of honor, knows she’ll be watching tonight with friends at her Eudora home, but you’ll have to excuse her from trying to recreate what she ate from the buffet line for her guests.