Landmark drills down for efficiency 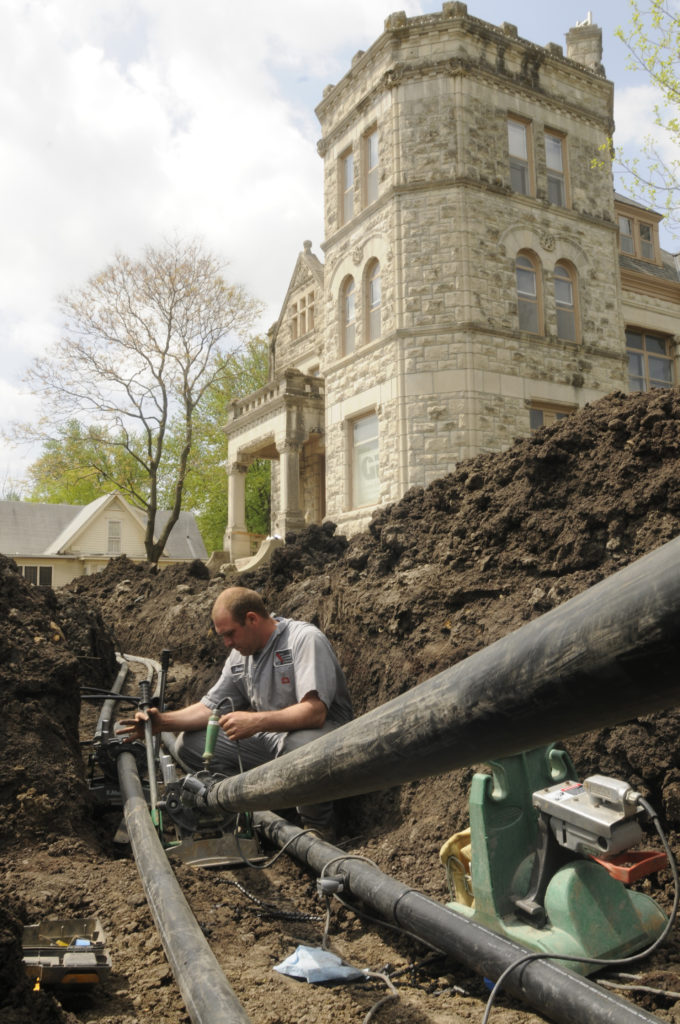 Jeron Fuller, of Evans Energy Development in Paola, connects pipes Thursday to a geothermal system that will use the heating and cooling power of the Earth to reduce utility expenses at the Castle Tea Room, 1307 Mass.

Wedding receptions, social reunions and organizational celebrations soon will be conducted under comfort, provided courtesy of the earth’s core.

Ongoing renovations at the Castle Tea Room, 1307 Mass., are getting their latest feature this week: a system of geothermal wells designed to provide the building’s interior with radiant heat during the winter and cooling comfort during the summer.

The closed system – to run water through more than 2 miles of plastic pipe reaching in and out of 27 holes bored 200 feet into the building’s front and side yards – will eliminate the need for traditional air conditioners, and reduce the need for a traditional furnace.

That’s all thanks to the heat-absorbing and cool-inducing qualities of property’s subsurface soil and rock. Water in the pipes comes out of the ground at a constant temperature, which then:

l Is used to cool the building during hot weather, with fans blowing over the pipes much like a traditional air conditioner blows air over a Freon-filled coil. The “heated” water then returns to the below-ground wells, where it is cooled for a return trip to the surface and another cycle.

l Contributes to warming the building during the winter by running through pipes in the floors, boosting the ambient temperature to a point where a traditional boiler, or furnace, won’t have to work as hard to heat the structure. The “cooled” water then goes back down below the surface, where it warms up again before returning back to the building.

“You use the Earth as a thermal sink,” said Craig Patterson, a member of the foundation that owns and manages the Castle Tea Room, a landmark listed on the National Register of Historic Places. “You’re exchanging heat. : We’re getting energy out of the ground.”

It’s a constant cycle that cuts energy bills and eliminates maintenance, Patterson said, for as long as 70 years.

It also isn’t cheap – at least up front. The system is adding $93,000 to the renovation project’s costs by requiring installation of pipe and digging of 200-foot-deep holes, using crews that normally spend their time drilling for oil.

Kansas University is employing such a system in its new scholarship hall, now under construction, after having done so with another one built in recent years in the Oread neighborhood.

The Castle Tea Room, built in 1894, is on track to return to its use as a home for public celebrations and dining. Extensive renovations – replacing electrical, plumbing and other systems while retaining the building’s charm – are three months into their first phase, set to be completed in September. Then comes interior finishes, such as furnishings and floor coverings.