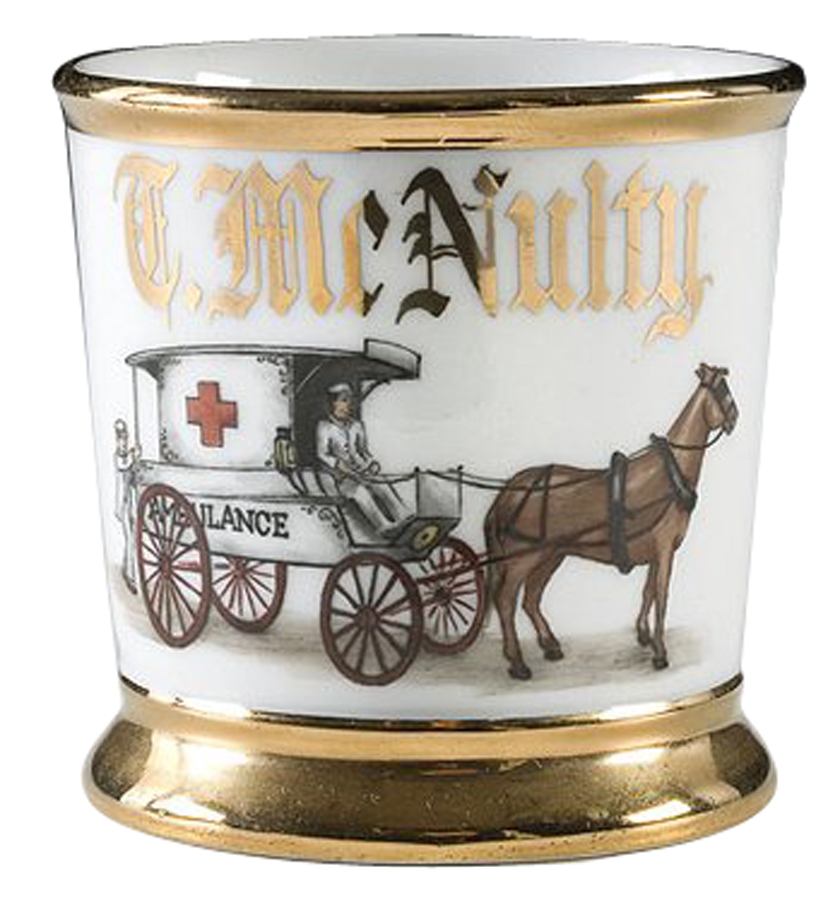 This shaving mug with the picture of a horse-drawn ambulance and driver sold at a Cowan auction in Cincinnati for 2,425.

Every Victorian barbershop had a rack filled with shaving mugs that belonged to regular customers. And most customers had a personalized mug with a name and often a special picture showing the owner’s job. Shaving was different in those days. No electric razors – just shaving soap, a brush and a safety razor. Because shaving was difficult and small cuts often got infected, men went to the barber several times a week for a shave. First the barber softened the skin and hair with a hot, wet towel on the face. Then the barber would get the customer’s special shaving mug, rub the soap with a wet brush and lather the customer’s face. Then the barber carefully shaved off the softened beard and soap foam with a straight razor. The occupations pictured on mugs ranged from policeman or mail-truck driver to dentist, house painter, gymnast, plumber, undertaker or even ambulance driver. Most of the mugs were made in Germany from the 1860s to the 1920s. Unusual examples sell for thousands of dollars. A Red Cross ambulance driver named McNultie would have been surprised to see his mug picturing a horse-drawn ambulance sell for more than $22,000.

Q: What can you tell me about Westmoreland’s Paneled Grape glassware in ruby? I inherited a water pitcher and a few other pieces from my mother.

Westmoreland Glass Co. did not make its Paneled Grape line (Pattern 1881) in ruby glass. The popular pattern was made in white milk glass, some with hand-painted decorations, from the 1940s until Westmoreland’s Western Pennsylvania factory closed in 1984. Your glass pieces probably were distributed by the L.G. Wright Co., which was in business in New Martinsville, W.Va., from 1936 into the late 1990s. Wright distributed glass made by many different manufacturers. It sold its “Panel Grape” pieces in clear, blue, amethyst, green, amber and ruby. The pattern, based on Westmoreland’s pattern, was sold by Wright as early as the 1940s. An L.G. Wright Panel Grape pitcher in ruby sells today for about $75.

Q: My parents have an old walking stick with an ivory handle. When the handle is pulled from the cane, a long sword comes out. I can’t find any information about this kind of cane. Can you help?

A: Canes are popular antiques, and “sword canes” are among the most eagerly sought. A sword cane is a special kind of “gadget cane,” a cane that hides something inside the shaft. If the gadget is a weapon, such as a sword or pistol, the cane is called a “weapon cane.” Sword canes can be traced back to the 15th century, when they were used by the nobility to protect themselves during pilgrimages. By the 17th century, sword canes became more widely used. They’re still made today, although it’s illegal to sell or carry them in some states. Single sword canes sold at auctions last year for prices that topped $2,000. Depending on the condition, age and quality of your parents’ cane, it could be worth hundreds of dollars or even more.

Q: I am looking for a vintage or antique dining-room table. Any hints?

A: Yes. We bought a 19th-century table with leaves to make an extra-long table for our dining room. But the table was made so it could be closed and, like most small tables, had an apron. When the table was opened, the apron on the ends bumped the knees of those sitting in some of the chairs. Try to find a table about 42 inches wide, the size needed for an average room. Check the mechanism for extending the table and sit in a chair with your legs under the table. The table might be low or the chair high. A center pedestal table instead of one with many legs is often a comfortable selection.

Q: I have several pieces of mid-19th-century dinnerware in a blue and white floral pattern. The bottom of each piece has a printed diamond-shape English registry mark and several other embossed marks, but none of them have helped me figure out who made the dishes. In the registry mark, the corners read “F, 23, 2, B” clockwise from the top. A banner under the mark reads “Van Dyke.” The other marks include “New Stone,” “BB,” “O” and what looks like a tiny barbell.

A: Van Dyke is the name of the floral pattern on your dinnerware. The dishes were made by Minton, a company founded in Stoke, Staffordshire, England, in 1793. Today Minton is owned by Royal Doulton. The English registry mark dates its design to Oct. 23, 1847. (The B stands for October and the 23 for the day of the month, while the F at the top of the mark indicates 1847, the year the design was registered.) The barbell symbol was used by Minton to show the year the dinnerware was made, 1848. “New Stone” and “BB” (for “Best Body”) were marks Minton used on earthenware dishes. Minton also made a multicolor Van Dyke pattern.

The Kovels answer as many questions as possible through the column. By sending a letter with a question, you give full permission for use in the column or any other Kovel forum. Names and addresses will not be published. We cannot guarantee the return of any photograph, but if a stamped envelope is included, we will try. The volume of mail makes personal answers or appraisals impossible. Write to Kovels, (Lawrence Journal-World), King Features Syndicate, 300 W. 57th St., 15th Floor, New York, NY 10019.