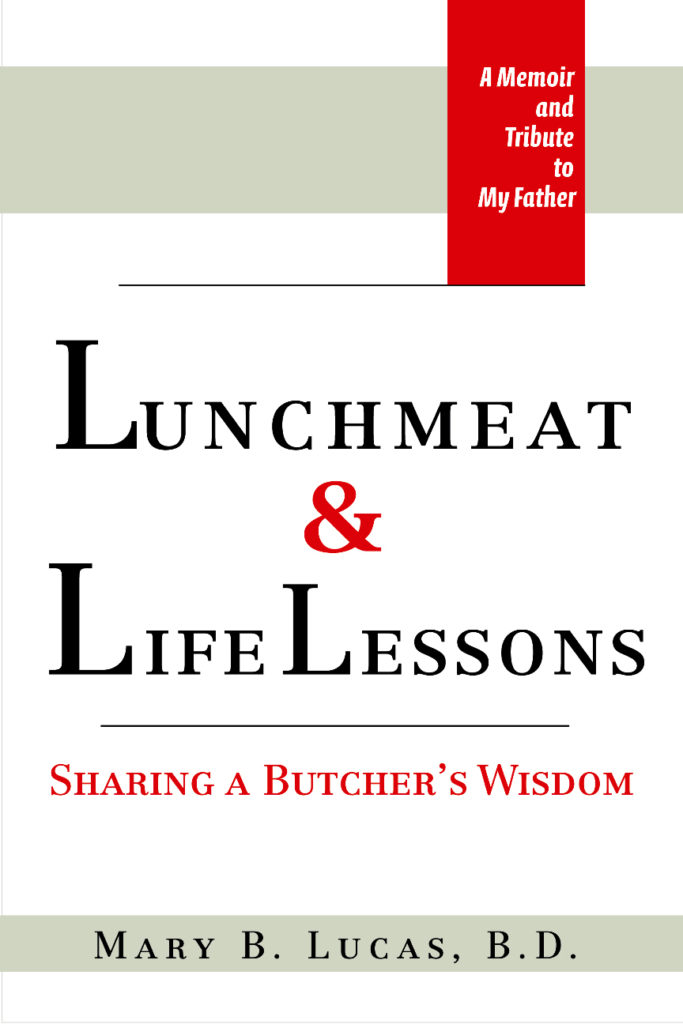 When Mary Bichelmeyer Lucas started writing a book about her father, John Bichelmeyer, she originally planned for it to be a gift to her siblings.

Bichelmeyer was a longtime butcher at his Kansas City, Kan., meat shop.

When John Bichelmeyer died in 2004, Lucas was trying to cope with the loss of her father. She helped the healing process through her writing.

“For me it was very hard losing my father, and I needed to write this stuff down while I had it,” she said.

Lucas later put her writings into a book about her father’s wisdom. It served as a healing aid, but it also was a memento for her fellow family members.

“I really wrote it as a gift to my family, and it really turned out to be something beyond that,” Lucas said.

The book is titled “Lunchmeat and Life Lessons” and has brought Lucas opportunities beyond the bookshelves. The book has drawn interest from companies that want Lucas to speak to their employees about the best way to succeed.

Her keynote topic is “Lunchmeat and Loyalty: How to Succeed in the People Business.” She’s given presentations for various companies across the country, from Naples, Fla., to Pittsburgh to Los Angeles.

A graduate of St. Joseph High School in Shawnee, Lucas went on to Kansas State University where she earned a bachelor’s degree in journalism and mass communication.

After college, she worked at a temp agency, initially as a short-term position.

However, she remained with the company long term, working her way up the business ladder before starting her own firm, MBL Consulting. For more than 25 years, Lucas has worked in the employment and work force management industry. For many of those years, Lucas would seek advice from her father about her work.

In fact, the book starts three days after she graduated from K-State in May 1980.

Although she has a bachelor’s degree to her credit, Lucas prefers to show another important status in her title: Mary B. Lucas, B.D. The B.D. stands for Butcher’s Daughter.

According to Lucas, her father had an unlimited amount of wisdom. Bichelmeyer had an eighth-grade education but went on to a successful career as a butcher in the family business at 704 Cheyenne in Kansas City, Kan.

“He was a good business man, but such a good person,” Lucas said.

Throughout the book, Lucas sprinkles various pieces of “Butcher’s Wisdom” from her father, such as “When you’re all wrapped up in yourself, you make a damn small package,” and “Don’t let go of one limb until you have a firm hold on another.” And the epilogue is this phrase from Lucas’ father: “To live in hearts we leave behind is not to die.”

Lucas also wrote about her father, who was known as the “city philosopher” in Shawnee, talking about the importance of “comeback sauce.”

For instance, Bichelmeyer told his daughter that if a customer asked for a pound of lunchmeat, he would put a few more slices, smile and tell them he put a little extra in their order.

“It’s really about getting people from the get-go and doing everything you can to make sure they don’t ever want to let go,” Lucas recalled her father telling her earlier in her career.

In Chapter 11, “Meeting the Challenge,” Lucas explores how to make the best of a tough situation.

During the flood of 1951, Lucas’ father, as well as her mother, Mary, were up in the middle of the night watching television images of flooding indicating the butcher shop was underwater.

Bichelmeyer told his daughter he instructed her mother to turn the television off and come back to bed, noting there was nothing they could do about the situation.

“Now come back to bed and let’s enjoy the fact that we can sleep late for a change,” Bichelmeyer said.

Bichelmeyer went on to tell his daughter that something good came out of the bad, that he was able to borrow money at a

3 percent interest rate. A friend advised him to borrow the money and invest it in real estate, which opened a new avenue of opportunity for the family.

The book is available for purchase on amazon.com, as well as at Bichelmeyer’s Steakhouse in Tonganoxie.

Lucas’ cousin, Matt Bichelmeyer and his wife, Vicki, own the Tonganoxie steakhouse.