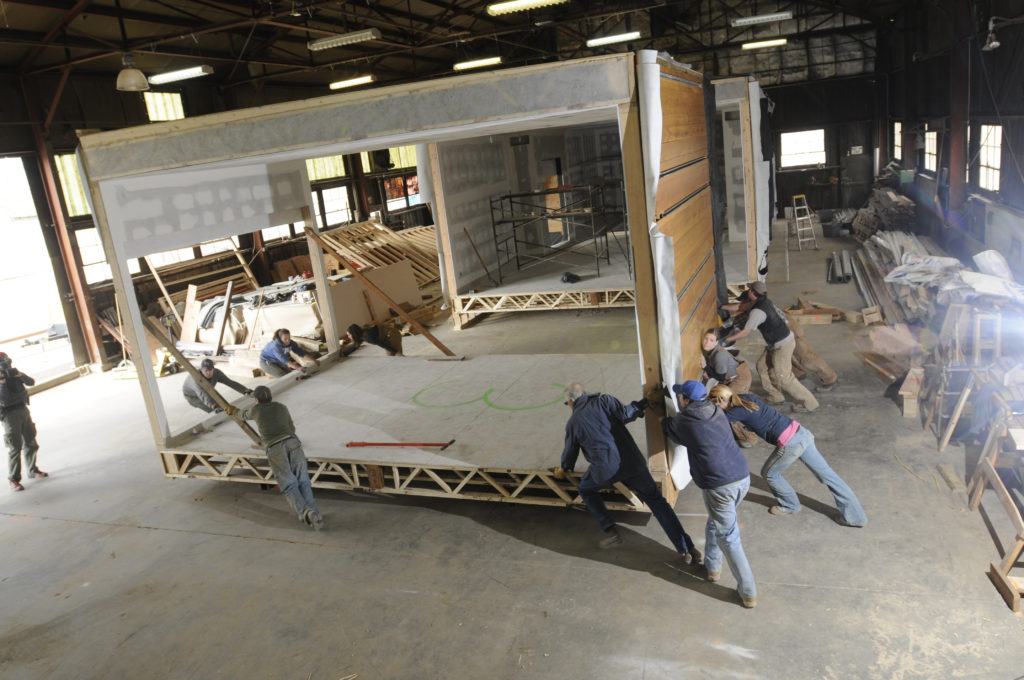 KU architectural students in Studio 804 push a section of their sustainable building out of their warehouse at Farmland Industries before it was shipped to Greensburg in March. The U.S. Green Building Council has certified the building at LEED Platinum for being environmentally friendly.

The U.S. Green Building Council has certified a piece of Kansas construction with the organization’s highest environmental honor.

The 5.4.7 Arts Center in Greensburg, a building designed and built by architecture students in Studio 804 at Kansas University, has been designated by the council as a LEED (Leadership in Energy and Environmental Design) Platinum building.

The center earned the designation – the first ever in Kansas – because of its wind turbines, photovoltaic panels, geothermal climate control, recycled building materials and other features, systems and processes considered ecologically minded.

“Studio 804 is to be congratulated for receiving Platinum LEED certification – the highest environmental honor a building can achieve,” said Rick Fedrizzi, the council’s president, CEO and founding chair. “The art center will be a showcase for high-performance, energy-efficient, healthy buildings, and an inspiration for others.”

The council now has designated 67 buildings in the United States as LEED Platinum, including:

¢ A ranch house at Del Sur, in San Diego.

Dan Rockhill, who is J. L. Constant Distinguished Professor of Architecture at KU and founder of Studio 804, said there were many notable aspects of the Greensburg project, from its white roof used to reflect heat to low-flow plumbing to conserve water. The wood exterior is made from planks removed from an abandoned building at the former Sunflower Army Ammunition Plant in De Soto.

The center’s gutters and downspouts “harvest” rainwater into a cistern for use in sustaining exterior landscaping, Rockhill said, much of which carries low-water requirements to begin with.

The center was built in a Lawrence warehouse, then its seven modules were hauled to Greensburg in time for the one-year anniversary of the May 4, 2007, tornado which devastated the town and gave the new arts center its name: 5.4.7.

Studio 804’s building is the first structure in Greensburg to receive LEED Platinum certification, but it will not be the last. In January, Greensburg leaders decided that all city-owned buildings would be required to earn LEED Platinum status.

Studio 804 is the senior graduate design/build studio at KU’s School of Architecture and Urban Planning. This class is for graduate students pursuing a professional master’s degree in architecture.