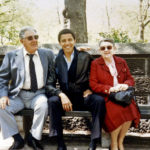 Barack Obama sits with his grandparents, Stanley and Madelyn Dunham on a park bench in New York City, in this undated photo taken when Obama was a student at Columbia University. Obama's mother, Stanley Ann Dunham, was born in Fort Leavenworth, Kan., and the Dunhams also lived briefly in El Dorado.

Five years before giving birth to a future presidential contender, the girl from Kansas extended her hand to Susan Botkin, a fellow ninth-grader.

He’d get a grandson, Barack Obama, who has almost locked up becoming the first African-American presidential nominee from a major party. Obama recently said that if his mother had lived to see his success to date, “she’d say, ‘Don’t let it get to your head. Just keep on working hard.’ But I think she’d be pretty proud.”

Obama likes to talk about her Kansas roots, repeating “mother from Kansas, father from Kenya,” implying the values of the heartland in the parent who stuck by him.

But she hardly left a trace in the Sunflower State, where she was born. Her family swept through California and Texas before returning briefly to El Dorado, Kan., her dad’s hometown, when she was in seventh grade.

The Dunhams soon left the heartland for good. And from the islands where she spent her remaining 40 years until her death from ovarian cancer in 1995, she never looked back.

The girl from Kansas twice entered into ethnically mixed wedlock; both marriages broke apart. She studied anthropology and spent years in Indonesia, teaching English and lining up microloans for the poor.

She spoke Javanese, French, Indonesian and a bit of Urdu.

And she trusted her son, “Barry,” to overcome the thorny identity issues of a childhood without a father.

He did. Barack Obama found his path to a prestigious college – even as his mom pursued interests half a world away.

The senator from Illinois attributes “what is best in me” to her can-do idealism and resilience to adversity.

He also notes how her wanderlust and “a certain recklessness” compelled him to seek for his own daughters a more stable upbringing – a home in Chicago, with two parents.

Those who knew her notice other traits passed down: A pointy chin, tilted up in pensive moments. A genuine rejection of racial lines. A supreme confidence – some might say elitism – in the face of circumstances that were anything but elite.

“She provided a very different role” from other mothers of her day, said Susan Blake, the former Susan Botkin.

Most of what is known about Stanley Ann Dunham’s childhood comes from her son’s 1995 memoir, Dreams From My Father, which she proofread before she died.

She was born in November 1942 at Fort Leavenworth, Kan., to Stan and Madelyn Dunham – both Kansas natives from the “dab-smack, landlocked center of the country,” Obama wrote.

Her father was a restless furniture salesman who so desired a son that he gave his daughter his first name. He joined the Army shortly after the attack on Pearl Harbor and likely was off to war when his wife traveled from the Wichita area to give birth.

She spent her infancy in the Wichita area, where mother Madelyn worked during World War II at a B-29 bomber factory.

Later, in Texas, according to Obama’s book, an 11-year-old Stanley Ann endured teasing from neighbors after she invited a black child into her yard to play.

By the mid-1950s, if just for one year, the family was back in El Dorado, local records show.

When Obama traveled there for a rally in January, resident Clarence Kerns gave him information about the family home on Olive Street.

“He didn’t know the house existed … so he seemed to appreciate it,” said Kerns, who attended high school with Obama’s grandfather.

Before 1956, when the Dunhams again left Kansas, Stanley Ann hadn’t stayed in one place long enough to leave much of an impression.

That changed on Mercer Island, Wash., where classmate Jill Burton-Dascher said: “She was comfortable in the bohemian group. They spent a lot of time in coffeehouses.”

Graduates of the Mercer Island class of 1960 reckon that Stanley Ann’s mother, a bank executive of white-collar stock, persuaded her freewheeling husband to settle down for the sake of their daughter’s education.

That education included questioning authority and religious institutions, and reading the works of Marx and Kierkegaard.

Friend John Hunt recalled that Stanley Ann “could step into a conversation and lightly call someone to account. She wasn’t nasty, but neither was she intimidated.”

When she graduated, they moved to Hawaii, where she applied to a university and quickly fell in love with one of the few black students on campus.

Barack Obama Sr. was Kenyan, deep-voiced, well-spoken and viewed by many female students as an exotic catch.

Alice Dewey, a friend, said: “He had whatever that spark is, the spark his son has today.”

“He was brilliant,” said Rep. Neil Abercrombie of Hawaii, a fellow graduate student.

Stanley Ann Dunham was 18 and pregnant when she married, to the disapproval of her parents.

Friends wondered if her relationship with a black man was meant to shock her father.

But all doubts dissipated when she passed through Mercer Island in 1961 with her month-old son.

“She was so proud of her baby, so relaxed, so self-possessed – excited about the future,” said Blake, who changed Barry’s diaper.

Obama returned to Kenya to pursue politics but became embittered by the tribal order. He had little contact with his ex-wife and son, though she never spoke a harsh word to Barry about his father except that he was a bad driver. (He died in a traffic accident in 1982.)

In Hawaii, Dunham had re-enrolled at the university to study anthropology.

For a time, she received food stamps.

By 1967 she had married an Indonesian student, Lolo Sotoroe, and followed him to his country. They lived in a house lacking electricity and a bathtub.

“My mom’s optimism might be seen as naive, but it informed my brother’s politics in a very significant way,” she said.

He attended a Catholic school, where the Indonesian kids called him “Negro.”

His mother, always the educator, woke him at 4 a.m. for American correspondence courses.

She showered Barry with books about the U.S. civil rights movement, speeches of Martin Luther King Jr. and recordings of Mahalia Jackson.

“To be black was to be the beneficiary of … a special destiny, glorious burdens that only we were strong enough to bear,” Obama wrote. “More than once my mother would point out: ‘Harry Bellefonte is the best-looking man on the planet.”‘

When Barry turned 10, she recognized the limitations of his Indonesian education. She and the children returned to Hawaii so he could attend the prestigious Punahou prep school. When her fondness for Indonesia pulled, she allowed Barry to stay in Honolulu.

Her parents finished the job of raising him. Hawaii’s multi-ethnic culture granted young Barry “a freedom” that mixed-race children wouldn’t enjoy in other places, Abercrombie said.

Grandfather Stan, who died in 1992, finally had the boy he’d hoped for.

The son had graduated from Harvard Law School and was close to launching his political career in Illinois when cancer claimed his mom.

Among his biggest regrets, he says, was not being at her bedside when she died in Hawaii.