Pages give glimpse of history, big and small 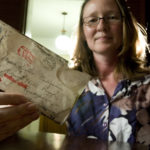 Lawrence resident Xan Wedel received a return-to-sender letter on Friday that was sent by Gertrude Gilmore, a previous resident of Wedel's home at 700 Ohio. The letter had been mailed in 1948. Wedel is considering framing the letter, which mentions events both personal and historic, such as Harry S. Truman's presidential victory.

A letter that a Lawrence woman received last week gives new meaning to “It got lost in the mail.”

It was sent from her home at 700 Ohio that year by Gertrude Gilmore, who lived there at the time.

“The plaque on the front of our house says ‘Gilmore,’ so I assume the Gilmore family built our home in 1890, and I think this must have been one of their daughters,” said Wedel, who has lived in the Old West Lawrence home for almost four years.

Gilmore was trying to mail the letter to someone named Sally in Connecticut. It’s unclear where the letter spent the last 60 years.

“It’s impossible to really know what may or may not have happened,” said Lawrence Postmaster Judy Raney. “No matter what, we always take it and go ahead and send it on.”

Wedel noted that stamped on the envelope was “Return to Sender” and “Found in supposedly empty equipment.”

“I’m not sure what that means from the postal service, but it finally got returned 60 years later,” Wedel said.

The letter mentions that “All Lawrence is in mourning since the election,” during which Harry S. Truman beat Thomas E. Dewey for the presidency of the United States. She also talks about her new Westinghouse electric refrigerator and the new pastor at Plymouth Congregational Church, Dale Turner.

“Just a fascinating glimpse of Lawrence at that time,” Wedel said.

And it’s not exactly a regular occurrence to have historical missives arrive in mailboxes.

“Every so often you’ll hear about it somewhere in the country that a letter showed up,” Raney said. “We don’t know if it was within our own system or reintroduced into the system by someone else.”

But Wedel is preserving her piece of history. She took photos of the envelope and four-page letter and scanned them both into her computer. The arrival also piqued her interest in the family that built her home.

“It would be really interesting to see if they are still in town or have any descendants that would know the history behind her and who she was writing,” Wedel said.