Big Monday games to be tougher

Jayhawks to play three of four away from home 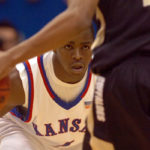 The 2008-09 Jayhawks, who lose all five starters off last year’s national title team, were assigned three ESPN Big Monday games on the road, just one at home.

“I’m not going to complain. Last year three of our Big Monday games were at home,” said KU coach Bill Self. His Jayhawks defeated Oklahoma, Missouri and Texas Tech at home and lost at Texas last season on Big Monday.

“Although that’s the first thing I looked at when I saw the schedule,” added Self, who received the slate last week. “Getting one day of preparation (after a Saturday game) with a young team and going on the road … that’s difficult. But, going to Baylor, Missouri and Oklahoma … winning at those places would be tough no matter when you play them.”

After the ’08-09 season, KU will have played eight Big Monday games at home and 14 on the road.

“If you play Kansas on the road, more times than not, it’s a big game no matter what. It’s good for other teams in the league to get exposure,” said Self, whose Jayhawks have lost just 16 league games in his five seasons – six of those road Big Monday contests.

Networks are well aware KU games on the road tend to be more competitive than ones in Allen Fieldhouse, where the Jayhawks have dominated the opposition throughout the years.

“Certainly I understand why that is the case (home-road discrepancy). I think it’s tougher to play on the road with one-day preparation than multiple days, but it also will be great preparation to make your team more prepared and tougher for the postseason,” Self said.

He likes being on TV no matter when or where the games are played.

“One of the great things about being at Kansas and playing at Kansas is you get many national exposures,” Self said.

¢ Duke, KU one, two: ESPN has ranked Duke No. 1, Kansas No. 2 and North Carolina No. 3 in its Prestige Rankings – a numerical method of ranking the best NCAA Division I programs since the 1984-85 season, when the NCAA Tournament was expanded to 64 teams.

On Friday, the network tapped North Carolina ahead of KU.

The rankings were amended Saturday, however, after ESPN learned it had incorrectly tabulated the correct numbers for KU’s conference titles and UNC’s number of All-Americans.

Of KU, ESPN commented: “The Jayhawks had eight 30-win seasons in the time span, tied for the most with Duke. A big part of KU’s undoing was the failed tournament runs in the mid-1990s when they were 1 or 2 seeds. Others will point to the back-to-back first-round losses to Bucknell and Bradley in 2005 and 2006.”

KU’s national titles in 2008 and 1988 definitely helped the Jayhawks’ cause. Rankings are explained at http://sports.espn.go.com/ncb/news/story?id=3501739.

¢ Recruiting: KU coach Bill Self was in Orlando, Fla., over the weekend watching Oklahoma Athletes First players Xavier Henry and Daniel Orton and others compete at the Super Showcase AAU Tournament.

Henry, a 6-foot-6 guard from Putnam City (Okla.) High, is considering KU, Memphis, UCLA and Texas. It’s long been believed Rivals.com’s No. 2-rated player will choose either KU or Memphis.

Orton, 6-10 from Oklahoma City Bishop McGuiness High who is rated No. 10 by Rivals.com, is considering KU, Kentucky, Oklahoma, Texas, Texas A&M and others.

Self also spent time last week in Las Vegas watching No. 1 rated John Wall, No. 34-rated Elijah Johnson and others at the Reebok Summer Championships and two other tourneys.