Down to earth: ‘Earthwork’ film production to chronicle remarkable experiences of Lawrence artist 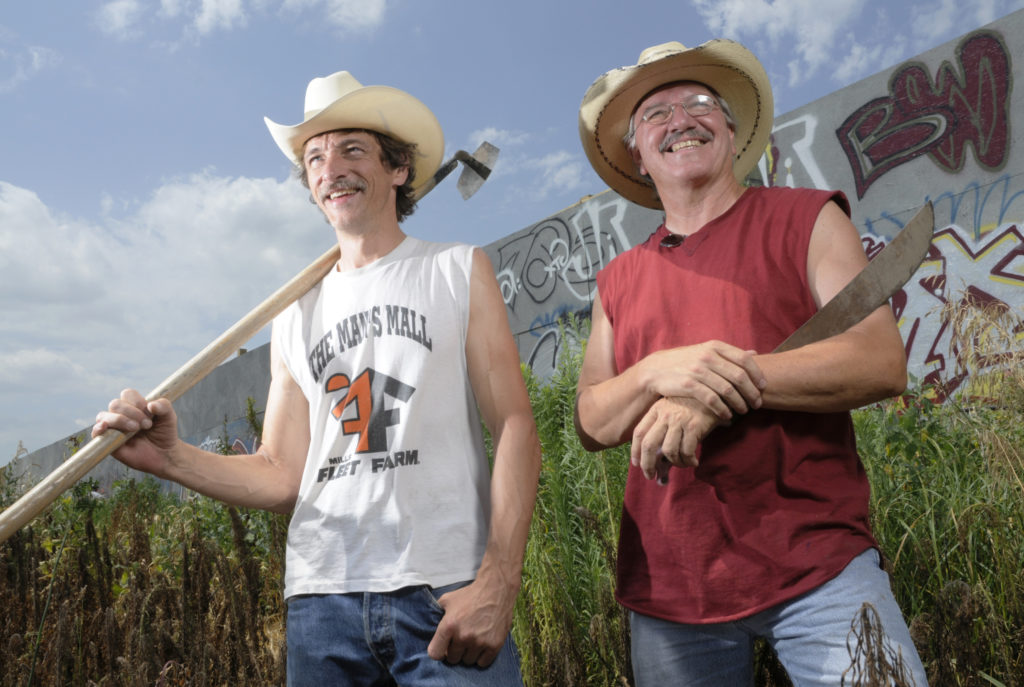 The movie Earthwork, which begins filming in Lawrence next week, will feature actor John Hawkes, left, playing Lawrence artist Stan Herd, at right. The movie will focus on Herd's New York City project he created in the early 1990s. 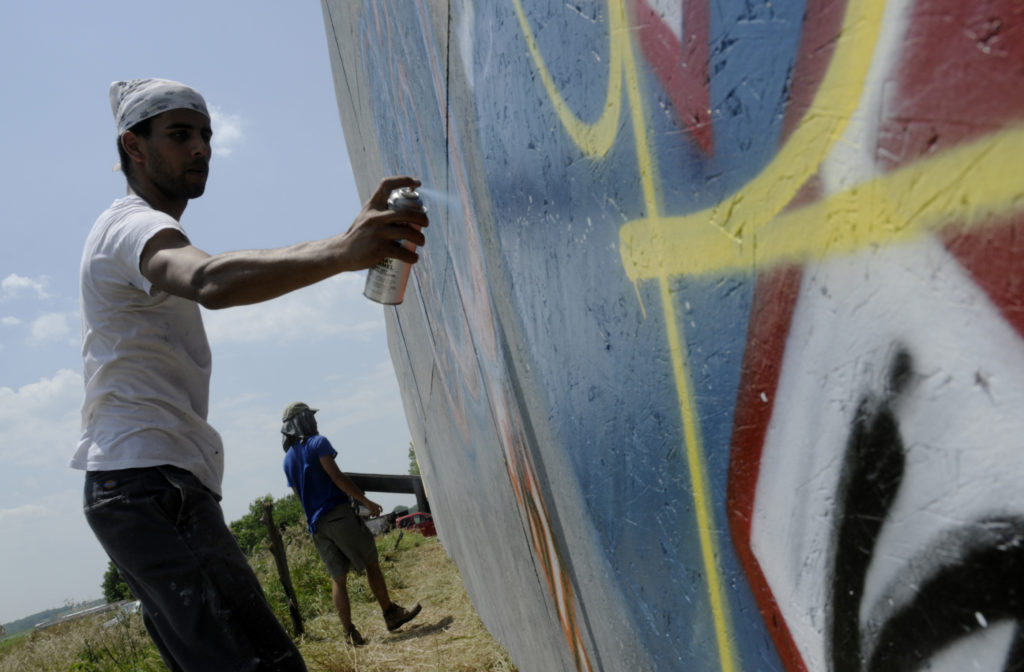 William Willmott, foreground, and his brother Berrigan, background, create a graffiti wall on farmland east of Lawrence for the movie Earthwork.

John Hawkes has one of those faces you’ve seen before.

It’s a quirky-yet-distinguished face that carries a haunted weight to it.

Television viewers know him as the Jewish shopkeeper on the Emmy-winning “Deadwood.”

Indie film fans remember him as the lead in the Cannes winner “Me and You and Everyone We Know” or as the doomed liquor store clerk in the crime scene that kicks off “From Dusk Til Dawn.”

Even those who only go to the multiplex identify his face from such blockbusters as “The Perfect Storm” and “American Gangster.”

Starting next week, however, Hawkes will be adopting the face of someone well-known to Lawrence residents: artist Stan Herd.

Herd is the subject of the feature film “Earthwork,” and Hawkes will be portraying a younger version of the local crop artist during a substantial production that will spend all but one of its days shooting in Lawrence.

“If I was to say what the film is about in one word, I’d say it’s ‘connection,'” Hawkes claims.

Hawkes, who was born and raised in rural Minnesota, found an instant kinship with Herd after reading the first few pages of the script. But he really connected with the Lawrence mainstay after studying Herd’s 1994 book “Crop Art.”

“In the first paragraph of Stan’s book was something that I completely related to: ‘On many levels, from intellectual to spiritual, my life seems to have been a search for a middle ground between the ideas and ideals separating the country from the city. At the heart of this is the cultural perception that little of importance happens in the vast center of the country. Those who inhabit rural America are perceived as somewhat inferior and certainly less informed than those who reside in a metropolis,'” Hawkes recites.

“I’ve kind of said the same in interviews myself. I felt revealed in a strange way when I read it.”

The ambitious “Earthwork” is framed mainly on Herd’s past experiences in New York City. In 1993, he spent a year creating a public art piece on land Donald Trump owned on Manhattan’s west side. During his months working at the site, Herd befriended two homeless individuals who frequented the nearby Penn Square railroad station – a middle-aged man named Lone Wolf and a young runaway graffiti artist named Ryan.

Herd’s solo adventure began to transform into how these men – who were given jobs working on a portrait of rolling hills and lofty trees he dubbed “Countryside” – grew to discover a renewed sense of self-esteem through art.

“It’s about ‘will’ on some levels,” says the 48-year-old Hawkes. “Sheer, ultimate will. The almost blind will you have to have as an artist to shut off everything around you – sometimes at the expense of relationships. That’s not a good thing, necessarily. But it’s something that is hopefully interesting to watch.”

“He’s absolutely perfect,” Ordal says. “I can’t think of anyone else who could even do this character. It’s not a country character, but there’s country to him. But he needs to be very intelligent. He needs to look like a real person and have dreamer eyes.”

“To be honest, I’ve been trying to keep a bit of a low profile around Lawrence lately, and now they’re making a movie about me,” says Herd, laughing.

It took nearly three years for Ordal to secure financing. Now cameras are slated to roll on Wednesday.

In a dramatic reversal of the movie-making trend which frequently uses Texas or Canada as surrogates when filming scripts set in Kansas, “Earthwork” is doing just the opposite.

“While it’s a Kansas story, it predominately takes place in New York. Yet we’re shooting it in Kansas,” says Ordal, a 2005 Kansas University film graduate.

For the urban sprawl-meets-empty acre spot that serves as the film’s centerpiece, Ordal envisioned a set that seemed – on paper – to be an impossibility.

But courtesy of land donated by Pendleton’s Country Market east of the city, his crew began constructing a mammoth set.

“It’s like a big hunk of New York just sprang out of the ground,” says Berrigan Willmott, who is readying the wall for filming.

According to Willmott, the gray expanse is 240 feet long and 14 feet high, and it will take more than two weeks to construct. He says 14 of the 25 days will be shot there. In addition to manipulating the materials, Willmott and younger brother Will are also helping to duplicate the early ’90s-era graffiti that covers the walls.

The overall visual impact of this scene is like someone dropped a section of the Berlin Wall in rural Lawrence. But this wall represents unity instead of division.

“It helps tell the story of this Kansas farm boy artist who comes to New York and is on an equal playing field – like ’12 Angry Men’ – with these other sentient human beings whose lives are very interesting and so incredibly different from his,” Herd says.

Cast and crew from all over the United States have converged in Kansas for the duration of the shoot. But this isn’t the first time actor Hawkes has performed in Lawrence.

In 1984, he came through town with his Austin-based band, Meat Joy. Though he can’t quite remember the name of the venue, he recalls visiting KJHK with the act that was self-dubbed “America’s entertainment nightmare.”

“I was acting in those days, too. But in Austin, Texas, there wasn’t any way to make money at it,” Hawkes says.

He helped form a theater company called Big State Productions that was responsible for an original play that got the troupe invited to the Kennedy Center in Washington.

“From that I got some, ‘They went thataway’ parts in movies,” Hawkes recalls.

The actor continued to pursue music simultaneously. (Even now he plays guitar and sings with a band called King Straggler.)

“It was not uncommon to get off your restaurant shift at lunch, drive 200 miles to Dallas to read one line for a movie, hop in your car and come back, make the 8 p.m. show for the play that you were in, then play in your band afterwards. It was really wonderful,” he says.

Upon advice from the late actor Brad Davis (“Midnight Express”), he determined that in order to “be taken seriously” he needed to head to one of the two acting metropolises. He chose Los Angeles over New York because he already had a car.

As for any compunctions about spending the summer making a feature in Lawrence, Hawkes says, “I knew it would be incredibly hot, and it’s an outdoor movie. In an independent movie you’re not going to have a fancy air-conditioned trailer. You know it’s going to be hard work. But that’s part of the fun. That goes hand in hand with making crop art.”

Although Hawkes wasn’t familiar with Herd’s name when he first received the script, he recalls reading about his work in an airline magazine years ago.

“I don’t want to speak for Stan, but I feel like we have a lot of similarities. We’re guys who are rural and raised in small towns who chose to become artists and leave those towns,” he says. “And we share a passion for a lot of other kinds of art that aren’t our breadwinners.”

That passion is what Herd feels is the key to “Earthwork” – and to his entire sometimes frustrating, sometimes glorious experiences on that New York acre.

“You don’t really know where you’re at sometimes until you go back and look at – in this case – what became my most incredible task. I bit off way more than I could chew to do that thing. It cost me a lot. It cost me a relationship (with former wife Jan Herd). But it happened because of my being doggedly determined to knock that work out regardless of the cost.”

Herd mentions that last week he came across his old driver’s license taken from that 1993 summer when he returned to Lawrence.

“I look like a (expletive) crazy man,” he says. “My hair was out to here, I was burned up and I had this glare on my face. That (earthwork) about killed me.”