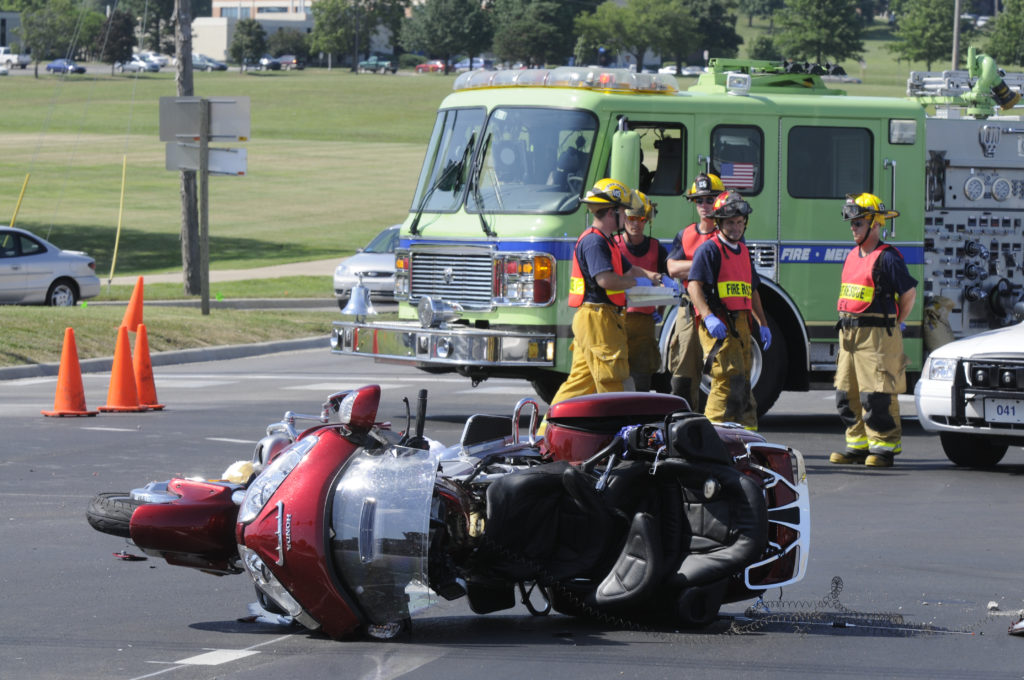 A motorcycle rider was killed Tuesday afternoon about 4:30 p.m. at 23rd and Iowa streets. The cyclist, who was wearing a helmet was struck by a semi-truck as he tried to make a turn.

One person was killed after a semitrailer collided with a motorcycle shortly before 4:30 p.m. Tuesday. Lawrence police confirmed the motorcyclist, described as a white male, died in the accident at 23rd and Iowa streets.

Lawrence Police Sgt. Bill Cory could provide no more information about the incident or the victim, but said he expected to release more details Wednesday. A helmet lay near the motorcycle at the accident scene. The man who died was the lone passenger on the motorcycle.

The intersection of 23rd and Iowa streets remained closed nearly six hours after the accident.

It was the second fatality in less than a week involving a large vehicle colliding with a two-wheeled vehicle. On Saturday, a Lawrence man was killed on Sixth Street after his scooter was hit by a city bus.

On June 28, a Douglas County Sheriff’s deputy was killed while riding his bicycle near Eudora. Also in June, a man died in a motorcycle crash near Lone Star Lake.

John Lavery, who works at CVS at 23rd and Iowa streets, said the rash of such deaths made him nervous.

“It’s been pretty regular that this has been happening,” he said. Though he doesn’t ride a motorcycle, he knows people who do.

“I have a roommate and a friend that both drive motorcycles. It just kind of makes me nervous and sick,” he said.

That same nervous sentiment may have area residents asking what is going on, said Marcia Epstein, director of Headquarters Counseling Center.

“When people hear about really tragic and violent incidents in our community, and when their perception is that those kinds of incidents are more frequent than what is expected in this size of a community … for most people, there’s an increased sense of fear and sadness and anxiety,” she said.

She said witnessing an accident scene can be traumatic, but it’s important to find people to confide in, whether it is a family member, a religious leader or a therapist.

“It’s good to seek our people that have special roles if you’re really having a hard time,” she said.