Best team award among those to be determined by fans 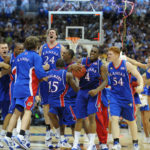 The Kansas Jayhawks go wild after their 2008 NCAA National Championship win over Memphis at the Alamodome in San Antonio.

ESPN announced Tuesday that the Jayhawks are up for sports team of the year honors in the annual ESPY Awards.

KU head coach Bill Self and guard Mario Chalmers from the 2008 NCAA national championship team will represent KU at the ESPYs in Los Angeles.

The Kansas-Memphis men’s basketball national championship contest – which KU won 75-68 in overtime – is nominated as the best game along with the Super Bowl’s Giants over Patriots and the NBA Finals Game 4, Celtics over Lakers. In KU’s contest, Chalmers made a three-pointer with 2.1 seconds remaining to send the game into overtime.

Fans determine the winners in 37 categories by voting online or with mobile phones.

The sports awards show will air July 20 on ESPN.

The ESPYs will be hosted by Justin Timberlake, who will be joined by an all-star lineup of top athletes and entertainers to celebrate the best sports stories of the year.