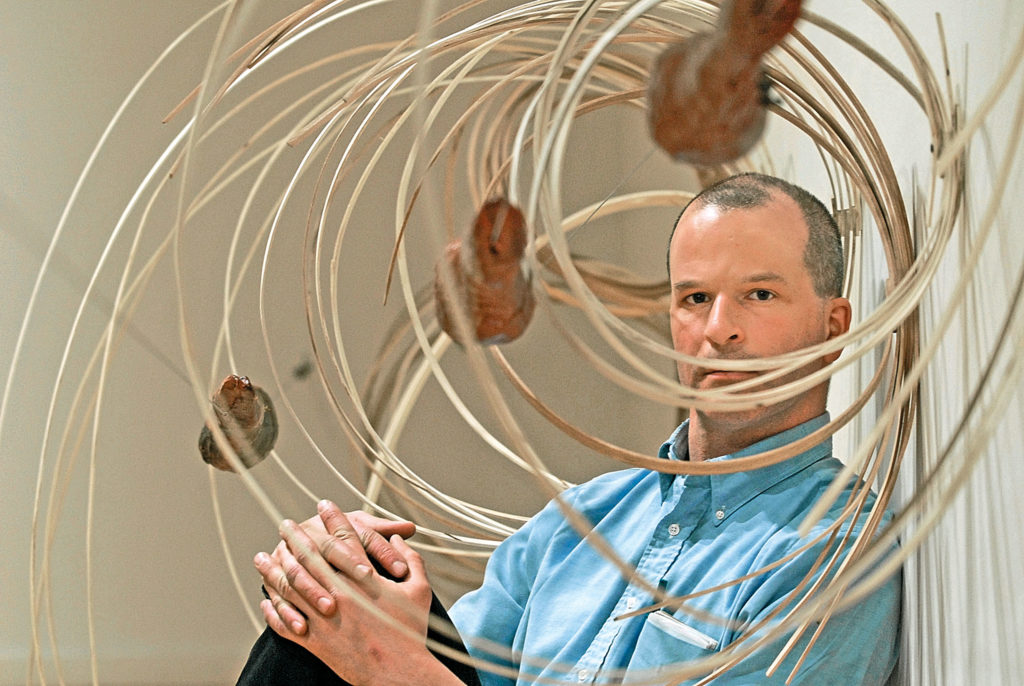 Artist Matthew Burke has created The 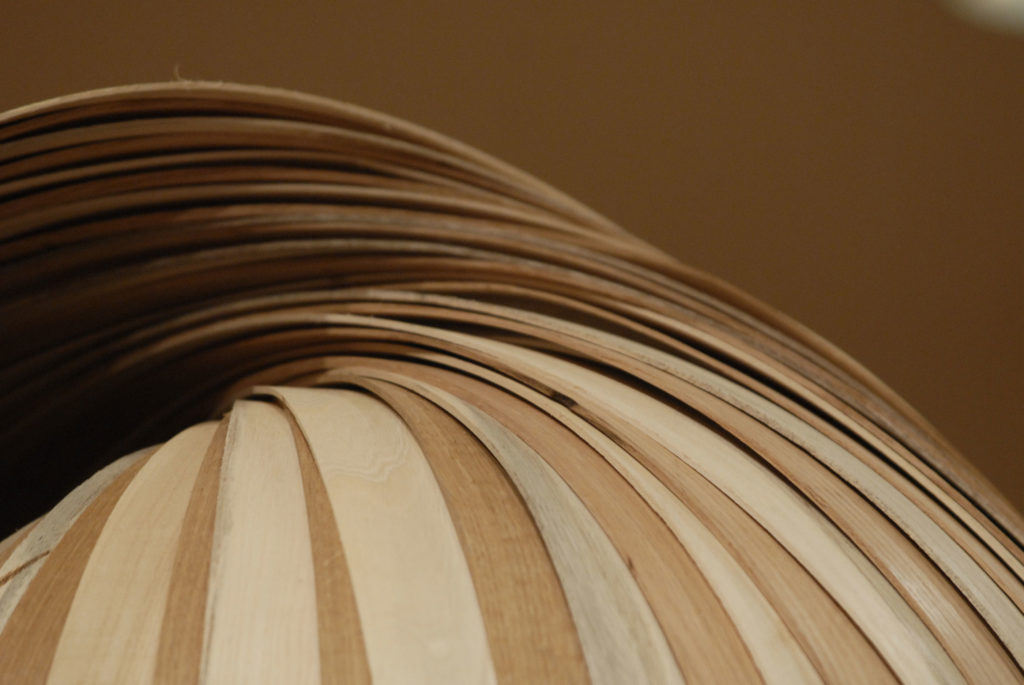 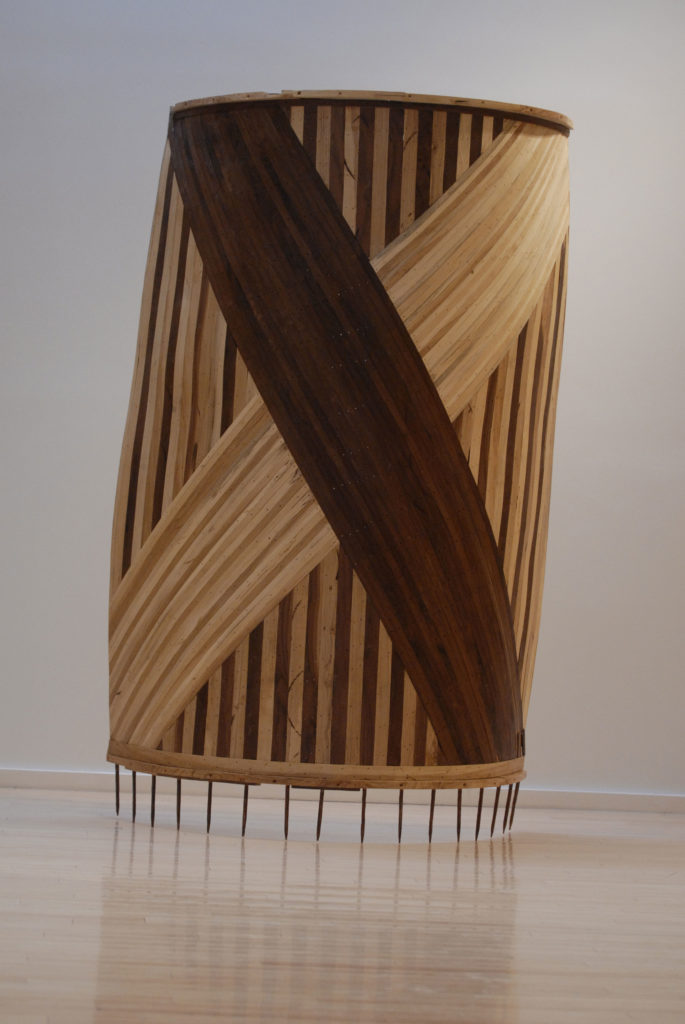 The Lawrence Downtown Gallery Walk runs from 7 p.m. to 9 p.m. today at these locations:

¢ Silver Works and More, 715 Mass., featuring the jewelry of Jim Connelly, the furniture of Don Gauthier, glass by Robin Mix, scavenger art by Mark Orr and the automata of Dan Torpey.

¢ Lawrence Arts Center, 940 N.H., opening reception for “The Passages Just in Time. Sound and Object, a collaboration with the KU Society of Composers and sculpture by Matthew Burke.” Also “Coolies: An Installation” by Thomas Huang.

As a sculptor specializing in wood, Matthew Burke is accustomed to the solitary aspects of creativity.

But when crafting a new piece titled “A Walk Among Beasts,” he formed an unexpected alliance in the university residency space where he set up shop.

“When I was drilling the holes for ‘Walk,’ I was using a chisel,” Burke recalls. “The maintenance man who was cleaning up comes in and says, ‘Why don’t you use a router?’

“When I get into my work, I’m fairly focused, and I kind of told him, ‘Just butt out.’ Turns out he was right, and I had to go back to him and say thank you.”

It happens that wasn’t the only collaboration Burke experienced recently.

The Kansas University assistant professor of sculpture turned his latest centerpiece project into an alliance of sound, music and technology.

Today, Burke will celebrate the opening reception of his installation titled “The Passages Just in Time. Sound and Object, A Collaboration.” His work is featured at the Lawrence Arts Center, 940 N.H., which is one of seven venues taking part in today’s Lawrence Downtown Gallery Walk.

“I had the chance on this piece to work with some sound artists from KU,” Burke says of his opus titled “Hoops and Birds,” a streamlined mix of wood and wire that spans the length of the gallery space.

“It’s triggered by a sensor in the ceiling. When people come up, it’s got about 14 different tracks it can layer in over a background track. So the idea is a person’s experience isn’t going to duplicate during the life of the piece. It’s always going to be subtly different according to the sound.”

Burke was first approached with the concept by Jason Cress, a KU graduate student in composition. (Cress had pitched the idea of a music installation to Arts Center gallery director Rick Mitchell, who introduced the musician to the artist.)

“We had a recording session with Matt actually working on the art itself. We got some samples of that and incorporated it into the sound installation,” Cress recalls.

“On some of it, we used his voice when he was talking about the project, and some of it we used the actual hammering sounds of sculpting it. We also used bird samples.”

Cress additionally partnered with fellow composition student Justin Blackburn, who crafted the foundation track, and Kip Haaheim, an associate professor of music theory and composition at KU, who created the computer program.

Interestingly, no actual instruments were used on the recording, only samples and nonmusical sounds.

“It was one of these things where I knew this thing would be really pregnant with potential,” Burke says. “I think I’m still digesting it.”

It’s been only two years since Burke began digesting the thought of moving to Kansas.

A Connecticut native who spent the previous 11 years working and teaching in New York, Burke was soon confronted with the differences in the art scene – both personal and professional.

“I’m a materials guy. That requires space. In sculpture I like to work big. All those things are working against one in New York,” Burke says.

“New York is where you can sell stuff. New York is where value is placed on things: art, commodities. I had a great time there and created some work that was compelling to me. But since I’ve come here, all the sudden I’ve got the room. I’ve got people who really respond to my work, and trees that I can get to know their wood properties. It’s been really fortuitous to come out here.”

That influence has apparently seeped into the work itself.

Take, for instance, Burke’s large cylindrical piece called “Generator” that dominates the floor of the gallery at the Arts Center.

“I can’t help but see a silo now,” the 41-year-old admits. “But it was the furthest thing from my mind when I started.”

In Burke’s artist statement that greets visitors at the entrance to his 11-piece collection, he writes: “Wood is inherently a question. Even if we know the species of a tree, determining the interior properties such as grain quality or moisture content is only speculating because we can not see behind the bark.”

Yet he finds that these questions often have tangible answers.

He says, “Wood has got its own life and its own things it’s going to do. … If (an art piece) is telling you it wants to be open; if it’s telling you it doesn’t want to be, you have to listen. That’s as important as the ideas that are in it.”

Collaborator Cress says of Burke’s art, “I love how seamless it is. I love how he uses the grain of the wood as part of the piece.”

Burke, who teaches sculpture and drawing at KU, believes the innate quality of the wood proves captivating to certain viewers.

“I find the people who respond most strongly to the work are people who identify with some inner peace that they have found or want to find,” he says. “That kind of inner stillness isn’t going to come from somebody who wants instant gratification.”