Out on the ranch with the cowgirls 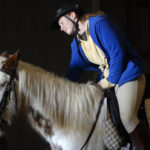 Ally Wilke, 14, of Lawrence, pets Dinky the horse while giving a riding demonstration Sunday during Watkins Community Museum of History's tour of Stepping Stone Ranch, 95 E. 1600 Road in Baldwin City. The tour marked the end of the museum's exhibit on cowgirls.

To coincide with the close of an exhibit on cowgirls, the Watkins Community Museum of History organized a visit for the public to see how real cowgirls work.

Stepping Stone Ranch, 95 E. 1600 Road in Baldwin City, was the setting for the educational venture, where owner Vera Gannaway demonstrated to 17 guests how she takes care of the 24 horses on the ranch.

A lawyer-turned-rancher, Gannaway explained how she keeps her horses, which range from competition steeds to horses rescued from the brink of death, healthy. She said one blue-eyed horse, Dinky, arrived at the ranch with shoulder blades that almost touched each other, the result of years of malnutrition. Thanks to Gannaway’s efforts, the horse is rehabilitated. On Sunday, Dinky trotted around the ranch’s barn, giving guests a demonstration on different types of riding techniques.

Gannaway walked through the steps of giving a horse a checkup, inviting visitors to listen to the stomach of a horse named Bart, as well as checking his gums.

“I hope from the beginning that they understand that horses are more difficult than dogs; they need more care,” Gannaway said. She hoped her guests would “learn a little about who (horses) are and how wonderful they are to be around.”

Chad Bloomer brought his wife, Kari, and two sons, Chase, 4, and Chandler, 7, to the ranch. Though the Bloomers own five horses, Chad Bloomer was soaking in as much advice as he could.

“We’ve got some horses. We brought the boys out to learn a bit more,” said Bloomer, who planned to take Gannaway’s advice to use square hay bales rather than round bales, which can have growths of mold, potentially causing disease in horses.

Rebecca Phipps, executive director of the museum, 1047 Mass., said the trip to a working ranch encapsulated the exhibit, which featured photos of cowgirls from the 1990s.

“The exhibit, the photographs were of working women on ranches and farms, : but those are just photographs,” Phipps said. “This is real life.”

Gannaway said she hoped owners of horses would have an increased awareness of ranches like hers, which can act as knowledge centers for those looking to learn more. Stepping Stone Ranch offers summer camp sessions and horse training throughout the year.

“We don’t typically wear cowboy hats around here,” said Gannaway, who noted her ranch is an English farm. “Whether or not we wear cowboy hats, we really are the quintessential cowgirls, because this is what we do. We work with horses every day.”