Marlo Angell - Special to the Journal-World 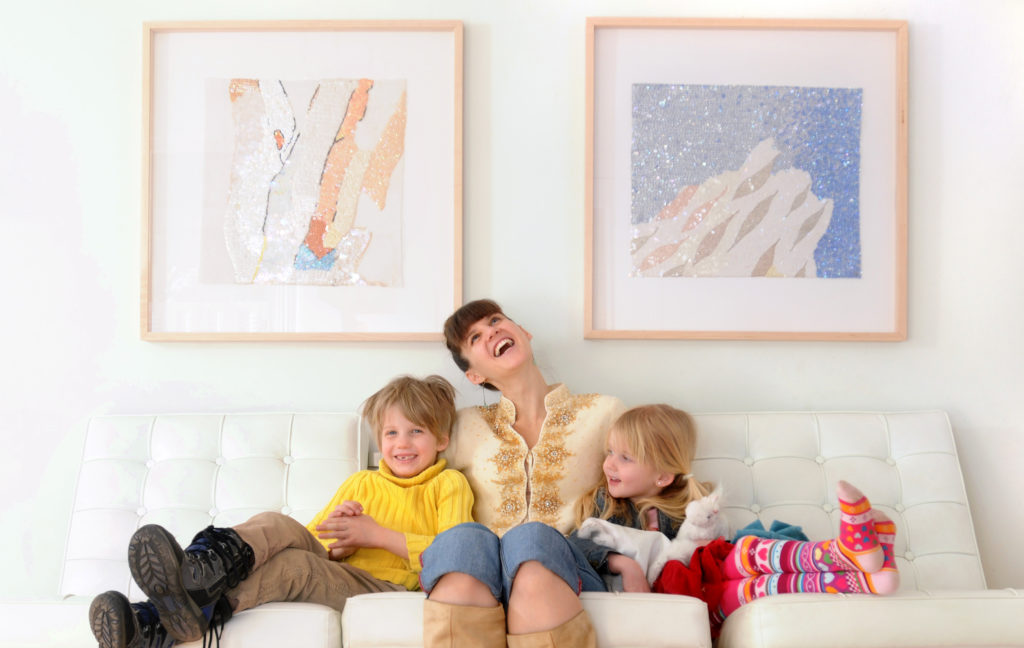 Lawrence artist Kristin Morland has a laugh with her son, Henry, 6, and daughter, Rose, 4, as the three sit for a portrait Wednesday in their Lawrence home. The Kansas University graduate takes care of her children at home and creates art as well. 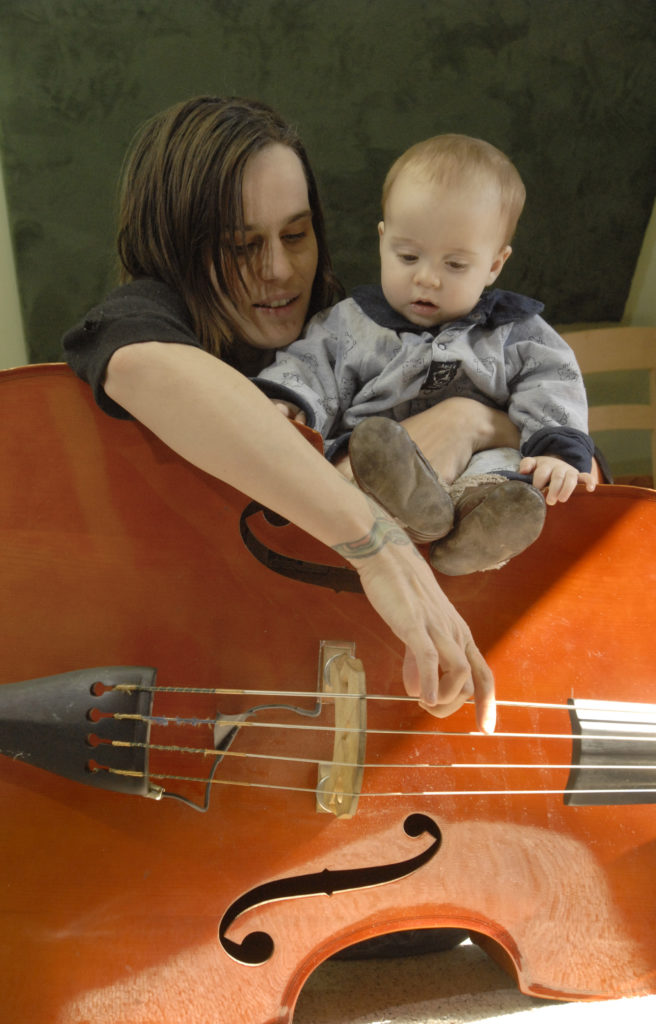 Katie Euliss plays the bass with her son, Julian, 8 months old. Euliss and her husband, Mike West, are the bluegrass duo Truckstop Honeymoon, and they home-school their children so they can be with them as they tour.

Artwork and music by mothers

Sometimes, Katie Euliss is preparing for a tour with her band, Truckstop Honeymoon.

Either way, she stays busy.

“Sometimes I see bands come in that are single and out having great time, and I’m over there tired and cooking dinner,” Euliss says. “But then I think about the human experience they’re missing out on. It inspires me, even if it’s exhausting.”

Lawrence’s reputation as an artistic family town has made it a refuge for many mothers who are creatively driven. Women such as Euliss have chosen to pursue their creative dreams here while raising a family, riding a delicate balance between their own needs and those of their children.

“Raising kids zaps energy, and the minutia of daily life tends to get in the way,” Euliss says. “But you find these great windows of lucidity. You have these parallel minds of the creative self and the mom and find these little golden moments sitting down.”

Euliss, 31, and her husband, Mike West, make up the bluegrass duo Truckstop Honeymoon. They relocated to Lawrence following the devastation in their former city, New Orleans, because of Hurricane Katrina.

Because of Truckstop Honeymoon’s rigorous touring schedule, Euliss and West home-school their daughters – 7-year-old Sadie and 4-year-old Vega. They plan to do the same with 8-month-old son Julian.

While on the road, they follow up their academics with trips to museums and other sites, enabling the children to be exposed to other languages and cultures.

West says his wife always has her children in mind first while on the road.

“On the road, we are a self-contained little tribe,” West says. “We go everywhere and do everything together as a family, from playing on the swing sets to sound check. Katie never compromises the welfare of the kids. We’ve walked out on gigs because the situation wasn’t right for them.”

Euliss says she hopes to incorporate the children into her music in the future.

“It’s like that Dr. Seuss book ‘The Places You’ll Go,'” she says. “You go around having these grand adventures and meeting the most amazing people. … Music can be your ticket to the world.”

Lora Jost established herself as an artist before she and her husband, Chuck Epp, decided to start a family.

She earned a master’s of fine arts and worked professionally as a visual artist for a decade before having a son.

Jost, 43, has painted and written about murals, created and taught art. And she eagerly welcomed son Nicholai, now 5, into the mix.

“Sometimes it’s fun to make art that he has a hand in,” Jost says. “There was one time he wanted to work on my mosaic … and I had to respond to what he did and it was really playful and spontaneous.”

An exhibit last year called “Two Mothers, Two Sons” displayed Jost’s integration of motherhood and art. Artwork created by herself and fellow artist mom, Sara Stalling, was shown alongside those of their children.

But this combination of child and art can have its downside.

“There was one time I had worked on this scratch board piece, a medium where once you lay down your lines you can’t take them back, and he just scraped and scribbled on to what I was doing,” Jost says. “I just cried.”

Lora has found that one of the unexpected challenges of being a mother and an artist is “to be careful not to encourage too much. Too much attention can lead to resistance.” In fact, since the “Two Mothers, Two Sons” exhibit, Nicholai has slowed down from making things.

“There’s an interesting dynamic there,” Jost says. “One I’m still learning about.”

All-day kindergarten has allowed Jost to spend more time on her art, but it was not the easiest adjustment to make.

“It was hard for me to let go,” she says. “But now that we’ve made that transition, it’s really great.”

Kristin Morland always wanted to be an artist. But after earning an art degree from Kansas University, she felt pressured to get a full-time job to be responsible.

“It was somehow like making art wouldn’t be significant enough,” Morland says.

She took a position at the St. Louis Art Museum, where she discovered a love for multidisciplinary art that incorporated sewing and drawing.

When Morland, 31, and husband Timothy found out a baby was on the way, she was excited.

“It was like I finally had permission to stay at home and be an artist,” she says.

“Sometimes with picking the kids up and laundry, and the house, you feel like you’re not living up to something,” Morland says. “But during naptime, I always have my time. And after two hours you’re all refreshed and can go back to enjoying each other.”

When thinking about the somewhat unexpected turn her life has taken, Morland says, “I never thought I would have been able to do all this. Before I was a mother, there were things I wouldn’t get to, but now … you know it has to get done before something else comes up.”

With her youngest now in preschool, Morland recently started to feel pressure to join the working world again. She accepted a job only to be let go due to scheduling conflicts.

“I was disappointed, but then Henry said, ‘You shouldn’t be doing that anyway, Mom. You should be at home doing your art,'” Morland says.

Kristin, visibly moved, reflects on the significance of this moment: “It was like he had just given me this gift -saying it’s OK to be an artist.”