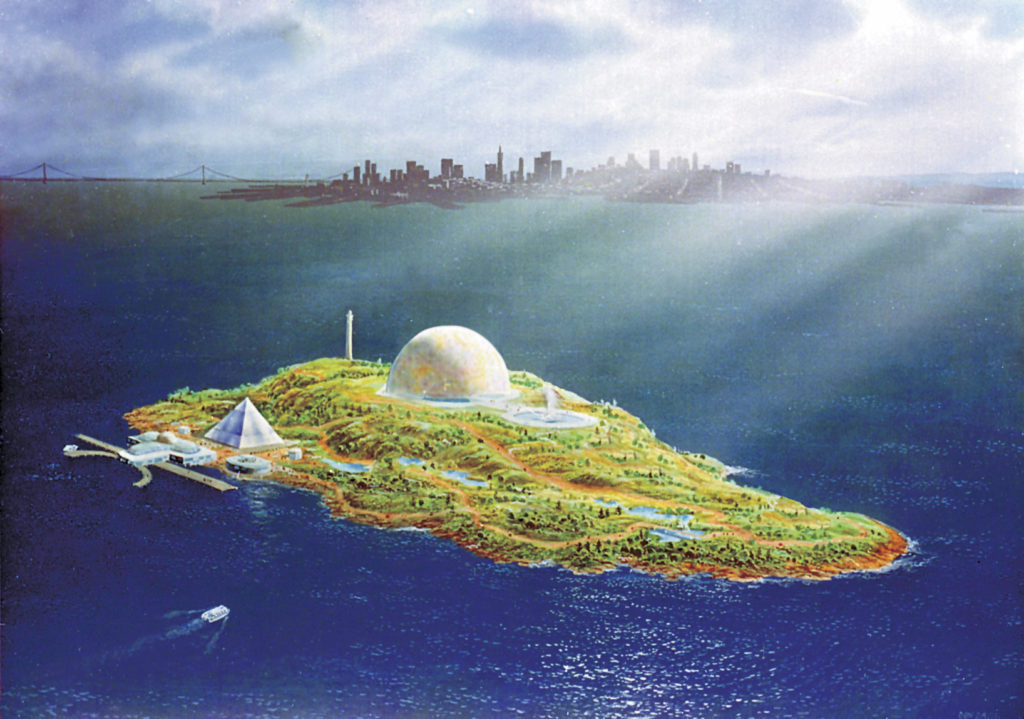 In this drawing, provided by the Global Peace Foundation, is what a proposed new peace center would look like on Alcatraz Island in San Francisco. A ballot initiative before San Franciscans envisions a new role for the island as a Global Peace Center.

San Francisco ? It would literally take an act of Congress before a city ballot proposal to turn Alcatraz into a global peace center could become reality.

The measure’s purely symbolic, given that the legislative branch would have to formally switch the island prison from federal to city hands, and that the proposal faces a host of other obstacles, including a lack of funding or legal force.

That doesn’t mean the measure on Tuesday’s ballot hasn’t gotten attention – much of it negative.

“VOTE NO ON THIS RIDICULOUS PROPOSAL,” the San Francisco Republican Party thundered in a voters’ pamphlet.

“Perhaps we haven’t reached the proper stage of enlightenment yet, but we’re more inclined to support propositions with defined sources of funding attached to them,” was the San Francisco Chronicle’s more tempered editorial recommending a “no” vote.

Even if Congress signed off on turning over the island, now maintained by the National Park Service, the logistics might be tricky, said Nathan Ballard, a spokesman for Mayor Gavin Newsom.

“While the mayor is in favor of global peace,” Ballard said diplomatically, declining to take a formal position on the measure, “right now we’re in a budget crisis, so it would be difficult to come up with the money to buy Alcatraz from the feds.”

The colorful peace activist behind the proposal is undaunted.

“Inspired ideas are always resisted. It’s just par for the course,” said Da Vid (he legally changed his name after it came to him during meditation). “Any time you push the envelope, which is what we’re doing here, there are going to be people that are going to push back.”

On a recent gloomy day, Vid strode along the rain-lashed walkways of Alcatraz – dark and forbidding under a pewter sky – and expounded on his vision for the island known as the Rock.

A rough-edged chunk of land in the San Francisco Bay, Alcatraz is famous as the site of a Civil War fortress, a military prison and a maximum-security federal penitentiary. It also was the site of three American Indian occupations, the longest and best-known of which lasted from 1969 to 1971 and inspired a new era of Indian activism.

Proposition C, as Vid’s dream is designated, would tear down most of the prison and replace it with a dome-shaped peace center and other buildings based on the geometry of a hexagram. The project has tie-ins to various mystical beliefs, according to Vid’s Web site supporting the proposition.

Alcatraz gets about 1.4 million visitors a year, most bent on having their pictures taken in the forbidding remnants of the prison that once held the likes of Al Capone. Vid argues that the peace center would be a much bigger draw, and a more uplifting one.

He believes backers would come forward to provide money for the $1 billion conversion project if it had popular support.

Vid said there’s no merit in making a brutal old prison a Bay Area hallmark and he suggests a museum could preserve the history and influence of the island’s various incarnations, in particular the American Indian occupation.

Others say the prison needs to stay as a warts-and-all reminder of the way things were.

Adam Fortunate Eagle Nordwall, who helped plan the ’69 occupation, noted that Alcatraz’s military prison also has a place in history for having held some Indians who refused to send their children to boarding schools aimed at “Americanizing” them around the turn of the century.

“That island is a national treasure,” said John Garvey, a regional historian who has written about Alcatraz, “and it needs to stay as it is.”