Lawrence couple’s passion for Christmas lights is off the charts 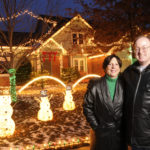 Mary Ann and Gary Martin have a lot of cars stopping outside their house at 1132 Parkside Circle. Not only do passersby get to view a colorful light display but they also get to listen to music synchronized to the display, broadcast to your car's FM radio. The Martins were photographed Monday, outside their home.

Gary Martin said creating a computer-controlled Christmas light display isn’t so hard if you have the time. PlanetChristmas.com was a very helpful resource for him, he said.

Even the simplest Christmas light display can require hours on a ladder in the bitter cold, trying to pin the brightly colored bulbs to the house.

Imagine then, how much time goes into a 14-minute, animated, music-accompanied light show using more than 35,000 Christmas lights.

That’s the sort of holiday display the Martins, 1132 Parkside Circle, have created in their front yard for all the world to see. And they have their own low-power radio station, 96.9 FM, operating out of their home to provide the music that goes along with the light display.

“It’s a lot of work,” said Gary Martin, who, when he’s not building the most elaborate Christmas light display in town, works as a system administrator for Lawrence Paper Co. “The songs take about 30 hours of work for every 30 seconds you see.”

The total show runs about 14 minutes. That means Gary, who has a bit of a theater and music background, and wife Mary Ann spent nearly 900 hours programming the lights to turn off and on with the music. That’s 35 24-hour days, or 105 eight-hour days. In reality, Mary Ann says, the project has been nearly three years in the making.

All told, Gary estimates they’ve spent about $4,000 on the display. And that doesn’t include some of the work they’d already done for their annual Halloween light display.

But that’s because they’ve done most of the work themselves. If they’d bought the light fixtures pre-formed, Gary estimated the costs at $10,000 to $12,000.

The Martins flipped the switch in early December but continue to add new sequences, including one added just this past weekend.

Despite the blinking and flashing and the line of cars parked outside, the neighbors don’t seem to be bothered by their neighborhood’s star power.

“The ones that are fairly vocal about it just seem to love it,” Mary Ann said. “The people across the street come out, let us stand in their yard to videotape it. They let our friends stand over there to watch it. They’ve been very supportive.”

And as far as Gary knows, theirs is the only fully computerized lighting display in Lawrence. The nearest similar display is in Gardner.

The lights go on at 5:15 every night and stay on until 10 p.m. weekdays. On weekends, as well as Christmas Eve and New Year’s Eve, the lights are on until 11 p.m.

The Martins expect the light display to continue through the 12th night of Christmas, which is Jan. 6.