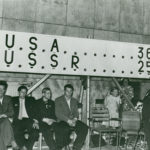 This scoreboard displays the final score of the 1952 Olympic gold medal men's basketball championship. The United States defeated the U.S.S.R, 36-25.

Kobe Bryant and LeBron James will remain multi-millionaires even if the NBA superstars fail to strike gold at the 2008 Olympics.

A non-winning effort in Beijing, however, would leave two members of the United States men’s basketball team without something deemed priceless by some of their proud predecessors – memories of being the best in the world in a sport created in their own country.

“One thing I’ve thought a lot about in recent years is being on the medal stand. It is really special, something I’ll never forget,” added Hougland in a phone interview from his summer vacation spot in Colorado.

Hougland won gold medals at the 1952 Games in Helsinki, Finland, and 1956 Games in Melbourne, Australia.

Hoag and Lienhard joined in the fun in ’52, while Kelley played on America’s 1960 powerhouse in Rome.

“We invented the game in this country. We ought to be the best in the world,” said Lienhard, one of seven Jayhawks to play for the 1952 U.S. team.

The rest of the roster was made up of AAU players. The Jayhawks (Hoag, Lienhard, Hougland, Dean Kelley, John Keller, Bob Kenney, Clyde Lovellette) earned the right to compete after not only winning the NCAA championship, but a pre-Olympic tournament made up of the NCAA first- and second-place teams as well as NAIA and NIT champs.

“We at the time were the heavy favorites,” Lienhard added of the U.S., which has won the gold medal in 12 of 15 Olympiads, but no major international tournament since the 2000 Sydney Games.

“The only teams coming on were the Russians and they weren’t very good. They were made up of players all 35 years old, without a lot of talent. We beat them pretty handily the first time we played (86-56 in pool play). The second time, they knew they couldn’t run with us. They stalled the ball. There wasn’t any question who would win. The question was what the score would be,” Lienhard added.

The Jayhawk-dominated ’52 U.S. Olympic team downed the USSR, 36-25, in the gold medal game after outscoring Argentina, 85-76, in a more entertaining semifinal.

“It was a dull game,” Hougland said of the final. “Warren Womble (of Peoria Catepillar AAU, who was U.S. head coach with KU’s Phog Allen the assistant) put our KU team in much of the second half because of the defense we played.”

Of course the U.S. team preferred to run, but the USSR made that impossible.

“The first game we blew them out. They got hold of Hank Iba’s offense and they held the ball. They’d hold the ball, hold the ball, we’d shoot too fast. Our points went from 80 to 36, but we still won the game,” Hoag said of the games against USSR.

“We had more size than the Russians, but they were in shape. They work out 12 months a year and they looked bulging. They lifted weights. We never did in basketball or football,” Hoag added.

“We blew out everybody. Nobody came close. Nobody had ever seen anybody like Russell,” Hougland said of the Boston Celtics Hall of Fame center and teammate in ’56. “He made things easy because you overplayed everybody on the outside. If they got by, you knew Russell would take care of ’em. He was fun to play with.”

“We were voted the best amateur team in Olympic history,” Kelley said. “Our first six were really good players, guys like West and Robertson. I was happy to be on the bench there. I knew they were better players.

“The guys all liked each other. Nobody complained about not playing. We were really good.”

The former Jayhawks are hoping for U.S. success this year.

“I think we’ve got a good chance. I’m disappointed at times we don’t distribute the ball very well,” Lienhard noted. “There’s still some of that one-on-one stuff. As big and strong as we are … and as well as our guys can shoot the ball … we’ve got the talent. LeBron (James) does his thing. Carmelo (Anthony) his thing. (Dwyane) Wade his thing. And (Chris) Paul is a good passer.

“From what I’ve seen, we do not have a consistent three-point shooter except (Michael) Redd. There will be some tests before this is over, but I think we’ll win.”

Hougland is hopeful as well.

“I don’t know the players, but have to believe they have a lot of pride,” Hougland said.

Kelley noted: “I think if they are as determined as they say they are, they can win. I have a lot of confidence in them. I think they went overconfident before and got kicked. I think they can do it. Everybody expects it.

“The competition is getting better, but we have good players and coaches and I expect we’ll win.”

Hoag makes it unanimous: “They are going to win the gold without a doubt. They are loaded. They have a lot of talent.”

Hoag goes so far as to say this U.S. team will go down as the best in Olympic history.

“I think it’ll be this one in ’08. I really do,” he said. “There are more good pro players than they’ve ever had. They’ve got the good ones from the NBA.”