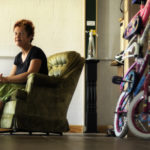 When Jean Ann Pike looks around the shelves of the Social Service League Thrift Store, she often sees art waiting to happen.

“I have a sculpture degree,” says Pike, who directs the store. “This is all art junk to me.”

Finally, others are seeing it that way, too.

The Lawrence Percolator, a 4-month-old gallery at 913 R.I., is currently exhibiting its “Dime Bag Show,” a hodgepodge collection of two- and three-dimensional artworks made with items from the thrift store.

It worked this way: Artists gave $10 each to the Social Service League and were able to fill up a paper sack with items from the store, which is at 905 R.I. Then, each artist made his or her piece in two weeks or less.

“Here we are new on the block, and we want to know our neighbors and be friendly,” says KT Walsh, who curated the show. “We’re not really the type to bake cookies.”

The resulting collection of 30 pieces is eclectic, to say the least.

¢ A shrine to a dead toad made from a lampshade (the preserved toad is sitting on top).

¢ A pack of zebra dolls made of overalls.

¢ A face made of records, CDs and other miscellaneous items.

Gary Hinman, an artist from Eudora, says he’s frequently used the thrift store for his found-object pieces in the past. His piece for the Dime Bag Show was a sculpture involving an egg cup, toilet paper dispenser and a glass bowl, among other items.

He had no idea what he was going to make when he put his collection in the sack.

“I don’t have that kind of vision,” he says. “I just started throwing things in the bag that I thought might have been useful.”

Ben Ahlvers, who teaches ceramics at the Lawrence Arts Center, was part of a group that made a mobile out of small plastic toys.

“We got a couple boxes of (Miller) High Life and some hot glue,” he says. “Our kids were out of town. It was nice to buy all these crappy toys and not have to keep them.”

As of mid-week, 18 of the 30 pieces in the show have sold, with some of the proceeds going to the Social Service League.

Pike, the league’s director, says she’s just glad the items can go to good use.

“It’s so much better than seeing things go into the Dumpster,” she says. “If you can look at this stuff and repurpose it, you can entertain yourself for a long while.”