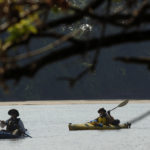 In this August 2008 photo, R.J. Stephenson, of Tonganoxie, left, and Cynthia Annett, of Oskaloosa, kayak their way down the Kansas River during the Kaw River Inventory near Lecompton. Stephenson, who serves on the Friends of the Kaw board, and Annett, a scientific advisor for the Friends of the Kaw board, are helping to collect and document information about the river and pollutants.

So far so good.

Riverkeeper Laura Calwell and two others from her research team will paddle through Lawrence today, just over their halfway point on their 171-mile Kansas River kayak inventory trip.

The trio, Calwell, 58, Mission; Cynthia Annett, 51, Oskaloosa; and R.J. Stephenson, 55, Tonganoxie, all involved with Friends of the Kaw, a nonprofit environmental organization, began their trip in Junction City. Stephenson is a board member of the organization.

They expect to arrive at the Kaw in Kansas City, Kan., where the Kansas River meets the Missouri River, in four days. They left July 26.

Dressed in long sleeves and pants with hats and sunglasses, the group is cruising right along.

“We’re ready to go for another month or two,” said Annett, ecologist and scientific adviser for the trip. “We’re just hoping we get more river, because it’s been an incredible trip.”

Along the way, they are identifying areas in need of monitoring, cleanup and restoration.

With the help of a GPS-enabled camera, detailed maps from the Army Corps of Engineers and other science gear, they are gathering information to help others, specifically the Corps, Kansas Department of Health and Environment and the public, to use for research. When the trip is complete, they will post the information on their Web site, www.kansasriver.org.

“There are not many people who do research on a sand, prairie-based river,” Calwell said.

Even less is known about the portion of the river from Topeka to Junction City, she said.

By providing GPS locations and photos of landmarks, even towns, and details about the river such as width and strength of the current, Calwell intends to familiarize people with the river.

A major concern and priority, said Annett, is to study the channel itself and riverbank stabilization.

On their trip, they have seen bulldozed riparian zones, the treeline on the bank of a river, and junk cars and washing machines to hold the bank.

“We want to show people the best practices, how to benefit the river and preserve their land.”

After lunch at Johnny’s Tavern, a battery recharge and a blog entry about the last leg, the group will be on its way again today. Keep up to date with the group’s progress and more at its Web site.