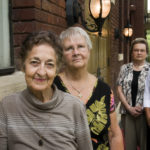 After the loss of their husbands and other loved ones, Lawrence residents Virginia Conard, left, and Marge Borom recently participated in the first counseling session of GriefShare at First Christian Church, 1000 Ky. The program is led by co-facilitators Lori Myrick, right, and Glenda Brenton.

Virginia Conard’s son fell out of a tree at age 7. He hit his head the wrong way. He was dead in a matter of hours.

Conard says she cried for a year behind closed doors, mourning her son in silence, the mother of a little boy gone.

Forty years later, grief returned in a different way. Her husband, former Kansas House Speaker John Conard, died of cancer in October. The pain was just as unbearable as before, but different.

And this time, the grieving process was different, too. Instead of crying behind closed doors, Conard joined the first session of GriefShare, a faith-based grief recovery support group. The program, offered last winter at First Christian Church, 1000 Ky., helped Conard not only with the death of her husband, but with the death of her sister-in-law, Violet, who also had been struggling with cancer and died during the 13-week program.

The program let her get out of the house, and out of the atmosphere of pain and suffering that had been her world for so long, Conard says.

“This has been wonderful … this is special and concentrated, and not everybody wants to hear about your grief. And I understand that,” she says. “And so here I can come and I can babble for three hours if I want to and it’s OK. And that’s very important because I don’t want to impose on my family, on my friends.”

Lori Myrick, a registered nurse and member of First Christian, is co-facilitator of the GriefShare program. She says now that it has had a successful first session of GriefShare, the church would like to invite anyone in the community to sign up for the next session, which will run Sept. 4 through Dec. 11.

“We want to make it clear that it’s not just for people who already have a strong personal faith but anybody that is seeking to have a better understanding of what is the most challenging time in most of our lives,” Myrick says. “It’s not proselytizing. It’s not trying to convert anyone, although there is a strong message of hope.”

In fact, it was a the message of hope that first drew Myrick to the program and led her to suggest it to church leaders as something that would be good to add to First Christian’s ministry.

“I did after-care grief counseling for Rumsey-Yost Funeral Home for a couple of years, and even in my own private practice and history, (I have) just been drawn to working with people who are going through grief. It’s a powerful thing. It’s a real privilege to go through this time with people, yet the faith piece was missing for me,” Myrick says. “Our church had been looking for a way to expand our care ministries … we’re very outreach-oriented here, and we wanted to add this piece. GriefShare was a the natural direction to go because of the faith orientation.”

Once the preliminary steps to introduce a local chapter of the national program – which consists of weekly two-hour meetings containing both a GriefShare video and personal discussion – was in place, Myrick recruited church member Glenda Brenton to facilitate the group with her. Brenton, though not trained in grief counseling, was someone with her own level of experience – she’d lost her husband, Jack, and completed another grief support workshop to help her cope.

“When I lost my husband, I attended a grief support workshop, and I found that it was extremely beneficial,” Brenton says. “And when you experience the loss of a loved one, your whole world is turned upside down. And so it’s very necessary to be in a caring, confidential, supportive environment so that you can share your thoughts and your feelings and experiences with others who are going through the same thing.”

“I think that anything I experienced and expressed to the group was helpful to someone, maybe not always the same person, and that helped me to go on,” Borom says. “And also being able to share my emotions with other people. I got a lot of literature in the mail, the funeral home was wonderful, they sent newsletters, but sitting at home and reading a newsletter by yourself is not the same as getting out with other people. Because that is something that I need, is to get out with people. And I still have to work at getting involved so that I’m not sitting at home a lot – I have plenty of that.”

Conard says that after going through the program she even sees her home differently. The same place where both her husband and sister-in-law were slowly saying good-bye is now a place she greets warmly.