Pattie Johnston - Special to the Journal-World 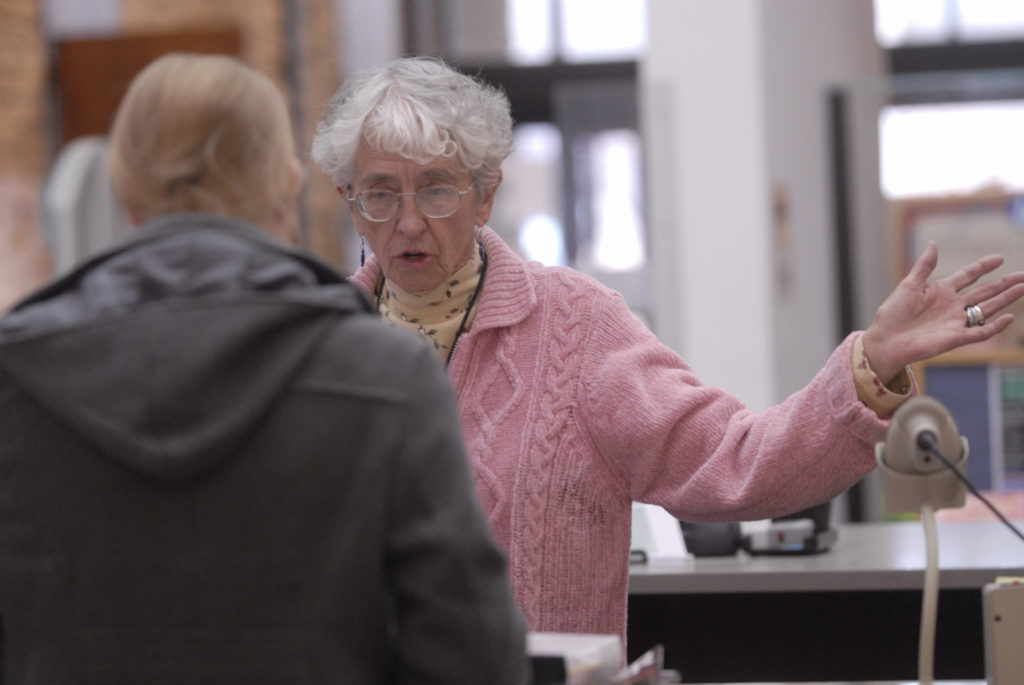 Ruthie Stohs works the circulation desk at the Lawrence Public Library, 707 Vt. Stohs is one of a growing number of older adults choosing to continue working in retirement.

Ruthie Stohs works hard in the circulation department of the Lawrence Public Library, loaning materials to patrons, answering questions and returning both items to the shelves.

Both Stohs and her husband, Marvin, work as ushers during Kansas University basketball and football games, directing ticket-holders to their seats.

The jobs aren’t uncommon, and it might not even be uncommon for people to have more than one job. The part that might be surprising is that Ruthie Stohs is 74 years old, and her husband is 79.

No longer is 65 the age to leave the work force. More Americans are working past the traditional retirement age, both for money and for fun.

The AARP estimates that in 2004 – the most recent data available – 28 percent of those aged 65 to 69 were in the work force, and 14 percent of all those age 65 and above worked. Those numbers have increased steadily since the mid-1980s.

The statistics reflect an overall increase in age in the American work force. The U.S. Bureau of Labor Statistics says 17 percent of the work force will be 55 and older by 2010, up from 13 percent in 2000.

The statistics are partly due to economics. Social Security benefits can be received at the age of 62, but when a person can receive full benefits depends on when they were born. Anyone born before 1937 becomes eligible at the age of 65. For those born between 1943-1959, the age begins at 66 and increases by months until those born in 1960 must wait until the age of 67 before receiving the full amount.

‘No matter the age’

“I would miss my clients,” she said, if she retired.

Tidd began working as a checker at Rusty’s Food Store in 1974.

“I moved here from Kansas City and was working at the Peter Pan Ice Cream Store,” she said. “The manager of Rusty’s came in often. One day he offered me a job at the grocery store.”

It was more money than she was then making, so she took the job. Though she has thought about retiring, financially it would have been difficult to do so. Due to health reasons, her husband retired in 1990, making it necessary for Tidd to continue to work.

“Hospitalization and insurance were needed,” she said. “I didn’t even think about when I’d be retiring.”

When Rusty’s closed in 1999, Tidd was uncertain of the future. Hy-Vee was opening a new store. She applied and hoped with her experience that she would be considered even though she was older than most of the applicants. She was hired and has become a mainstay at the store.

Chris Wiltfong, assistant manager of the store, said Tidd is one of the most dependable members of the staff.

“Hy-Vee believes that the right person for the job should be hired no matter the age,” Wiltfong said. “We are looking for someone who smiles, is good with the clients and provides good service. Peggy is one of our best. There are people who we know come to the store because Peggy provides them with the service that makes them want to come back.

“We have several older workers that provide this kind of service. Not to take anything away from our younger workers, but Peggy and other older workers want to make sure that they give the best that they can each day. They work hard and have earned the respect of the store and the clients.”

Tidd hopes to “maybe semi-retire this December and do some things that I’d like to do that I don’t have time for now.” She would like to have worked two more years so that she could be eligible to keep the insurance plan that she has under Hy-Vee, but, she said, “I just don’t think I can do it. These cold mornings have been difficult. I’d like to work as many part-time hours as I can under Social Security, but we’ll see.”

With the age for full Medicare benefits increasing, insurance is a major reason for many to continue working. In recent years, many companies laid off long-time workers or merged with other companies that did not recognize previously promised benefits.

Insurance and pensions were lost. Finding themselves job searching for work after many years posed new challenges.

Many older workers had job experience but not the technological skills that were necessary. Cheryl White, director of the Lawrence Workforce Center, 2540 Iowa, says that she continues to see more people in the older age group who need to hone their job skills or assistance in writing their resumes to reflect their experiences.

The center assists older workers in expanding their skills to make them marketable in today’s job requirements. Some of those who come in have retired and want to have a second career in another field than their previous jobs, but many do have financial reasons for working. There have been adults 70 and older who have inquired about part-time positions, White said.

For some, it is “because they really want to work, not necessarily because they have to work,” she said. White reminds employers that older workers have much to offer, such as dependability and life experience.

AARP is having workshops across the country to help older adults to learn computer skills, interviewing techniques and other skills that enable them to compete in the job market successfully. It is also provides lists of companies that are considered “job friendly” to those 50 and older.

Neither Ruthie nor Marvin Stohs has any desire to completely quit working. Ruthie said that each person needs to consider their own situation. Health does make a difference, even if financially it is difficult. Continuing to work is often not an option.

Ruth commented that a person has to be prepared mentally, too, to retire.

“Marvin and I both retired from full-time jobs,” she said. “You have to decide if you’re ready to do it. You need a reason to get up in the mornings.”

Asked if she planned on completely retiring soon, Ruthie laughed and said: “I don’t think that I could do it, as long as I’m healthy. Working keeps me young.”